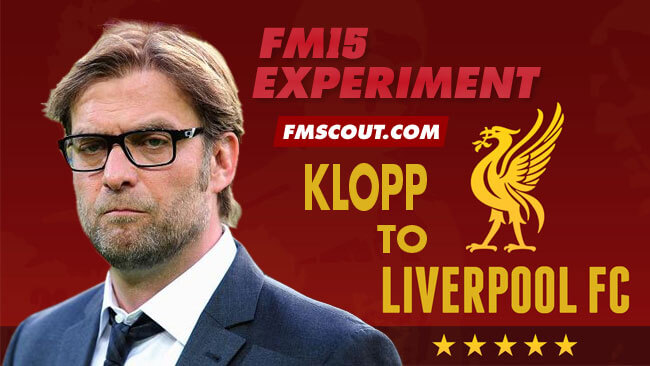 With the season drawing to a close and the summer transfer window looming, many clubs are looking for both new players and managers to take them into the future. Using Football Manager 2015, I will aim to see what impact the game believes these changes will have on the clubs. For the first experiment of the window, I will be making a managerial change, with Jurgen Klopp replacing Brendan Rodgers as Liverpool. Ever since Klopp announced his departure from Dortmund he was being linked with a huge host of clubs, and after Liverpool’s disastrous end to the season, the post at Anfield was a job Klopp was heavily associated with.

I have made Brendan Rodgers unemployed and moved Klopp in as the Liverpool manager, earning £65,000 per week. To make this as realistic as possible, I have used the Whizzkids transfer update which does all the promotions and relegations as well as some of the already confirmed transfers, so players like Steven Gerrard will no longer be at the club. The Champions League places have not been changed however, so Liverpool will still be in the Champions League for the first season, but I don’t expect this to be a major factor and it will be interesting to see how Klopp performs in Europe. I wouldn’t call it a disaster, but a poor season on all accounts from Klopp’s Liverpool. His reign never looked promising from the start, struggling in the transfer market, bringing in only Andros Townsend who barely featured during the season. Getting demolished by Manchester United in the FA Cup, whilst a shock defeat to Watford saw them exit the Capital One Cup showed the failings of the squad in both quality and depth. A rare glimpse of hope in the Champions League saw them reach the quarter-finals, but lost both legs to a far superior Real 3-2, playing with 9 men in the home leg. The league was disappointing for the club, equalling their performance in the 2014/15 season, but never looking to challenge, eventually finishing 25 points of champions Manchester United. Their defence struggled, conceding 58 times, the joint 2nd worst in the top half of the league, only better than surprise outfit Watford. Highlights came with home wins against Arsenal and Manchester United, but too many losses to lower sides such as Newcastle, Stoke, Sunderland and Norwich saw them slump.

This all culminated in the Liverpool owner losing faith in the German manager, who lost his job days after the last game of the season, bringing this experiment to an abrupt end, after just one season. Dortmund continued to struggle with their new manager, finishing 6th in the Bundesliga, and eventually sacking Thomas Tuchel. They replaced him with Jurgen Klopp who made a surprise return to the club shortly after his Liverpool sacking.

To replace Klopp, Liverpool chose Dutch manager Frank de Boer as their new manager. The former Ajax manager signed a 3-year deal at the club, and began a revamp of the squad.

Everton chose to replace Roberto Martinez at the end of the season with a hugely controversial move to install former Liverpool boss Brendan Rodgers as their new manager, who became only the second manager to move between the Merseyside rivals.

Lionel Messi won the Best Player in Europe and the Ballon D’Or, playing a massive part in Barcelona’s double winning season, securing the Spanish Cup and the Champions League after beating both Atletico and Real before a penalty shoot-out victory against Bayern in the final.

So, in the end, Jurgen Klopp's tenure at Liverpool was short and dismal and Football Manager predicts he would lose his job after just one year in charge. Has this changed your mind over whether Rodgers should stay at the club, or do you still feel Klopp, or an alternative would be a better choice? Let me know in the comments, and also please suggest more experiments you would like to see in the future, especially player ones as the transfer market opens.