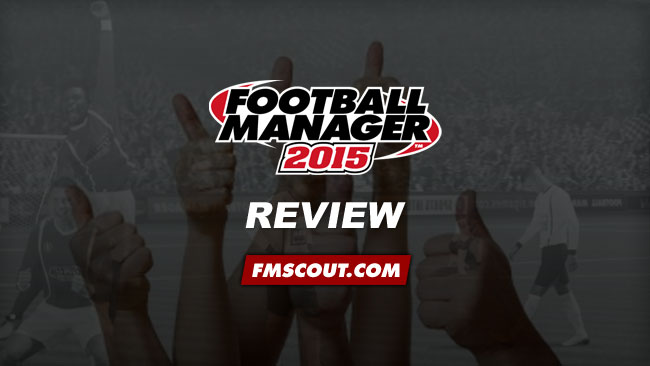 Football Manager is back
Dust off your suits, iron your shirts, and prepare your title-winning speeches, as a new new thrilling, nerve-wrecking adventure has arrived at your doorstep. Yes, that is right, Sports Interactive has released its latest game in its award winning series; Football Manager 2015. There have been a lot of changes made to the game this year in the interface, tactical system, how the AI opperates, and even in your own manager profile! In this review for FM15, I will cover every aspect of the game, and what has changed since last year’s game.

Your Manager
Some of the most significant changes made to FM have been made to your manager. A number of new options have been added to the start-up of your game where you create your manager, including additional favoured clubs, additional languages, and more.

The biggest addition to the manager profile is that of your own managerial attributes, just like what other managers have in your game. These are dictated by some choices you make during your set-up of the game. A window appears where you get to choose whether you are more of a 'Tracksuit Manager' or a 'Tactical Manager'. Alongside this option, you get to select your Past Playing Experience and your Coaching Qualification. These all contribute to your attributes and reputation as a manager, so choose wisely.

The addition of the option to have more than one favourite club and to have extra spoken languages is a good one, in my opinion. This allows you to move to foreign countries more freely without being held back by language difficulties. Not to mention, it adds to the realism of the game. 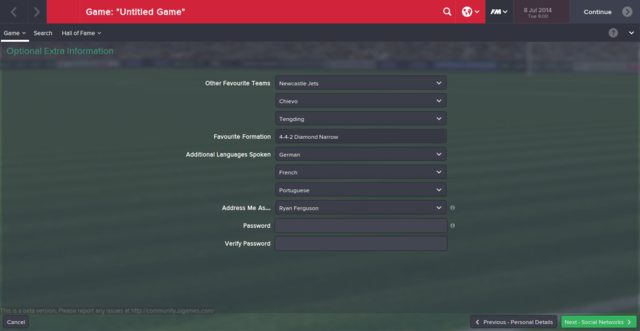 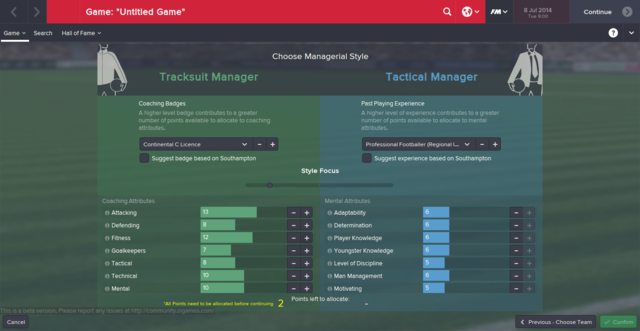 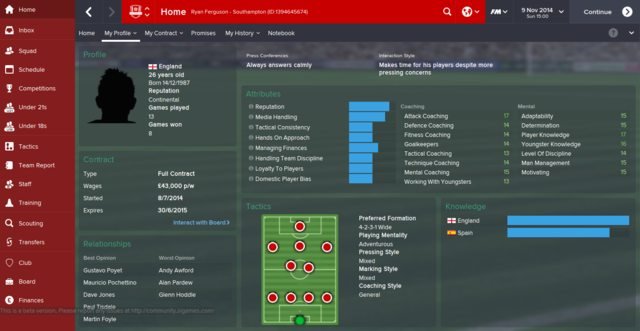 Interface
The interface of the game has taken a massive overhaul as SI attempted to make the game more accessable for players. A lot of the changes, if not all of them, will take time to adjust to but they could turn out to be very clever.

The major change to the Interface is the movement of the options bar from the top of the screen to the left of the screen, to replicate the new Windows 8 format, in certain ways. The paths to certain pages have changed and it will take time to adjust to moving around the FM world.

In terms of other Interface changes, the search bar is now located at the top, to the left of the Search Icon. You just click on the name of the page you are currently on and you can search any player, person, club, country, competition or stadium (new) you require. One cool page which was added is the Competitions page, where you are shown an overview of how your club is fairing in each competition entered in the current season. 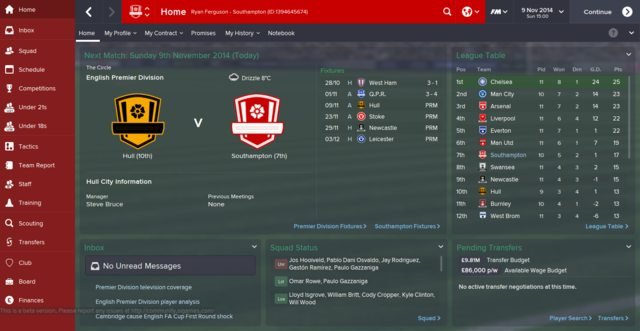 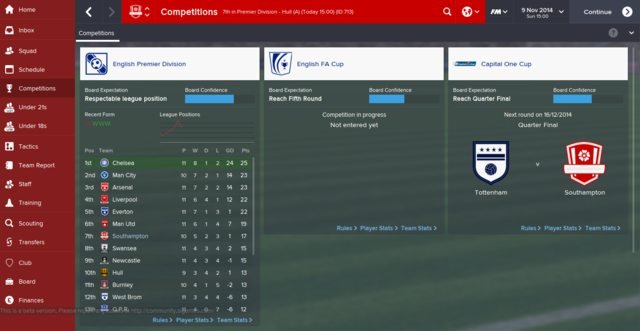 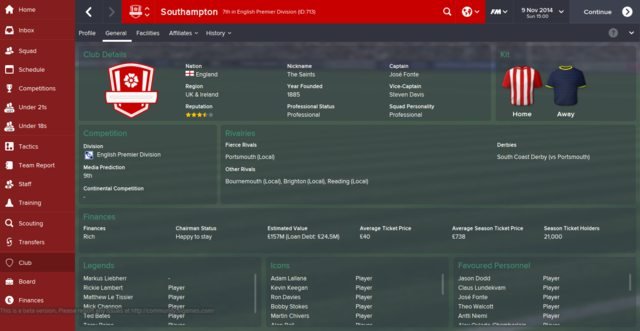 Players & Training
In terms of players, not much has changed. You still manage them, train them, off them contracts, buy & sell them and have private talks with them. In terms of attributes, Creativity was renamed to Vision and is now positioned between Teamwork and Work Rate.

The player reports have taken a drastic change. There are now two large columns on the report card; one of the Pros of the players and the other of the Cons of the player. This makes for great presentation and it is much easier to see what the coach/scout thinks of that player. The player position suitablity and ability reports are still there.

Only two changes have been made to training. The first is that you, the manager, can now be involved in training assignments. This will help a lot if you have high coaching attributes. The other change is to the Individual Player Focus, where you can now train a player in a certain role and a certain mentality for that role. This means that you can now train your DRs/DLs to focus on the role Full Back (Attack), rather than just as a Full Back in general. 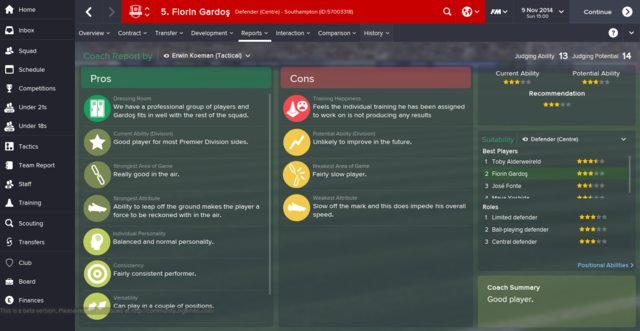 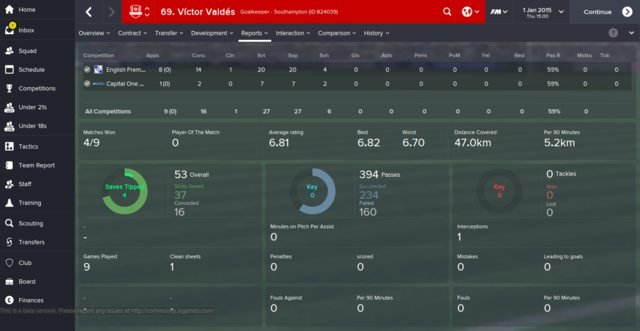 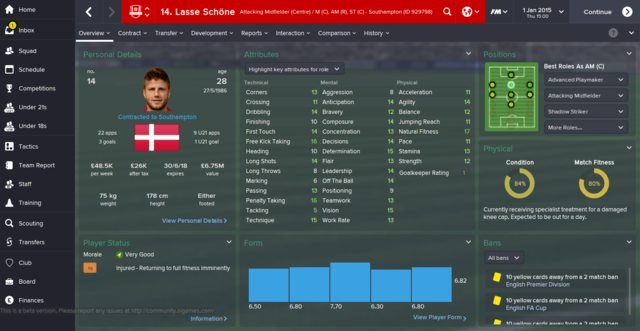 Tactical System
In FM14, we saw the entire tactical system revamped in favour of a new, more interactive one. The sliders were removed for instructions and the game was made more realistic. After all, how many managers in real life tell their right wingers to play 13 clicks attacking and 12 clicks wide, while keeping their passing to a level 6 clicks! in FM15, we have seen a progression of these tactics.

Some more player roles have been added, all of which were on display in this summer's World Cup in Brazil. The "Roaming Playmaker" comes to mind as we witnessed Andrea Pirlo single-handedly tear England to pieces, even without touching the ball, at times! This role is one where the player is located in a deeper midfield region but he moves around the pitch freely to pick up the ball and influence the play in the way he wants, with no boundaries and no obligations.

The Raumdeuter is another popular role, best displayed, in my opinion, by Joel Campbell. This is a wide player who would neglect defensive duties in order to move around in space in attacking areas for when his team has possession of the ball. This role, in essence, is a wide Poacher role.

The third, and final, new role is the Inverted Wing Back, where Marcelo shined for Brazil. He will defend as a full-back but when attacking will cut inside and make runs through the middle, in order to create space for other players out wide by taking the opposition wide players out of their comfort zone. This role is a little like the Inside Forward role, except for full-backs.

Apart from these new roles, the tactical system only has one more upgrade and that is the increase in specific Player Instructions. You can specify how you want your goalkeeper to distribute the ball, and how quickly too. This is very useful for those who like to build up from the back or slow down the play and play carefully from the back, or even launch a quick counter-attack, starting with the goalkeeper. 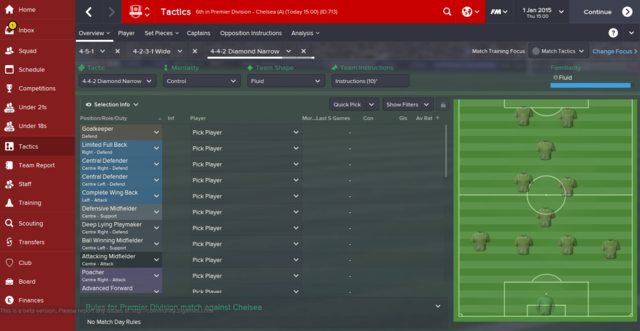 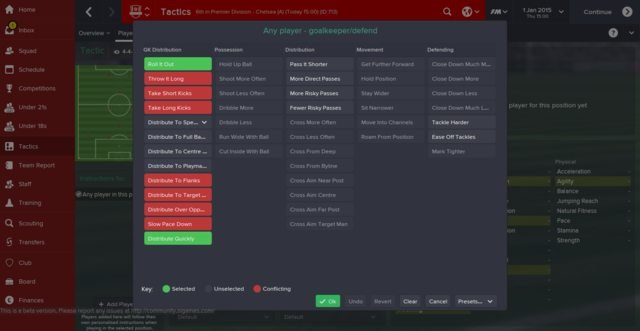 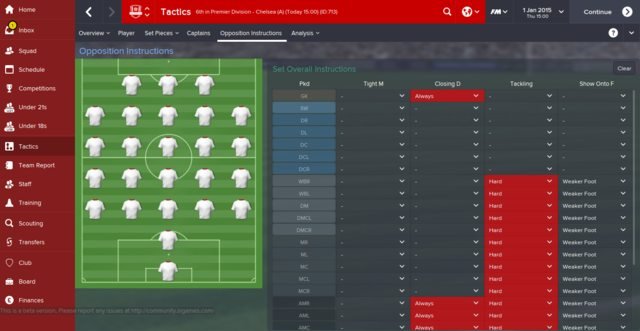 Match Engine
SI have spent months to work further on their match engine and, for me, the biggest improvement has been on the ball mechanics. You can now visibly see the swerve, the bend, the dip, the power on each pass and shot as the players try to manipulate this round piece of leather, or pixels in this case, in whatever way they can. Players like Ronaldo and Bale can now hit scorching long range efforts while Messi and Ronaldinho can curl a ball in an obscene arc. Also, the condition of the pitch and the wind at play will affect the ball. You will now see the ball bounce up in the air if it hits an uneven surface or stop dead in a pool of water. If it is windy, expect the ball to drift in one direction or another.

An issue which a lot of people had with the Beta was the number of high-scoring games due to poor goalkeeping or sloppy passing. This happens every year in the Beta and is always fine-tuned for the full release of the game, so no need to worry about that. Overall, I'm very pleased with the new match engine and it brings to life what could happen if your team makes a mistake. Liverpool fans, look away now! Steven Gerrard's untimely slip can now be replicated in the game. 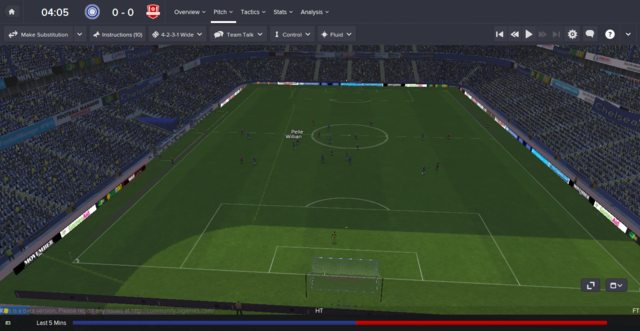 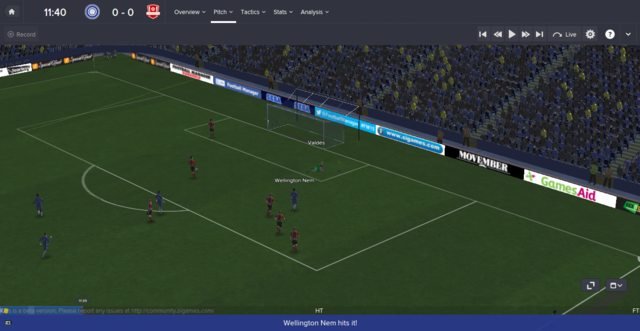 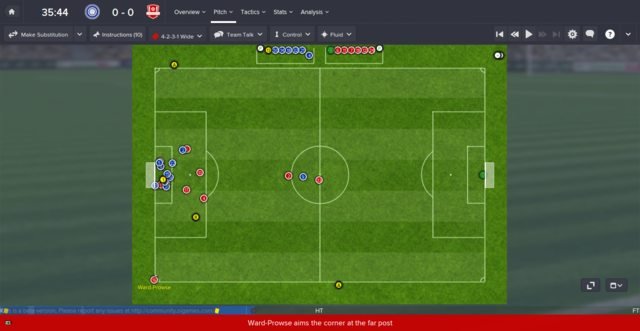 Scouting, Contract Negotiations & Transfers
The whole Scouting part of the game has taken a massive overhaul. Now, when you ask for a scout report on a player not at your club, you can only see partial attributes or a scale of attributes until your scout has 100% knowledge of the player. This means it will take more than just two days to acquire knowledge on certain players, much like real life where managers spend months targetting specific players to see if they would fit in at the club. This will make scouting a lot harder, but more realistic and it will require more work than ever, rather than clicking a button and finding out everything about a player. You may even fancy going to watch a player play a game to gain a first-hand insight in to his ability.

Contract negotiations have not changed much, if at all. A couple of options have been added, such as player bonuses for your team reaching a specific round in a cup or finishing in a specific place in the league. This means you can further entice more players to your club by promising them money for helping your team reach it's seasonal targets.

In terms of transfers, nothing has changed. The other clubs will drive their price up for players you bid on and try to sign your players for as little as possible, just like in real life. The man who finds the best bargain gets the last laugh. 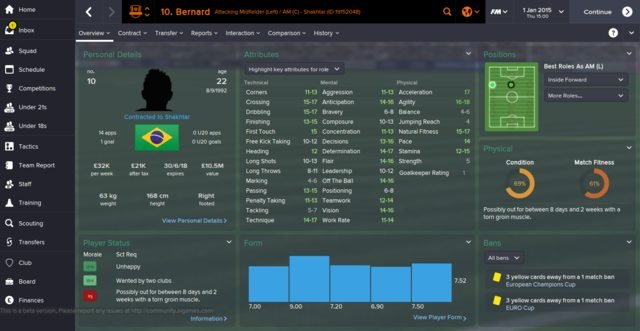 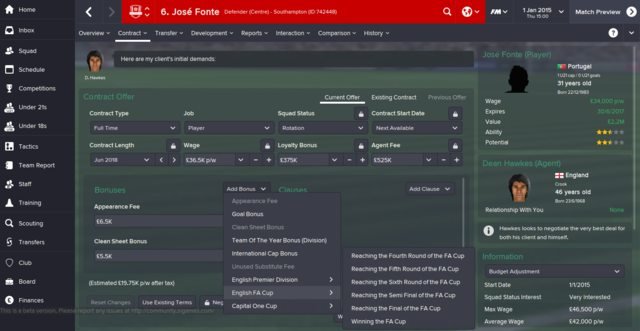 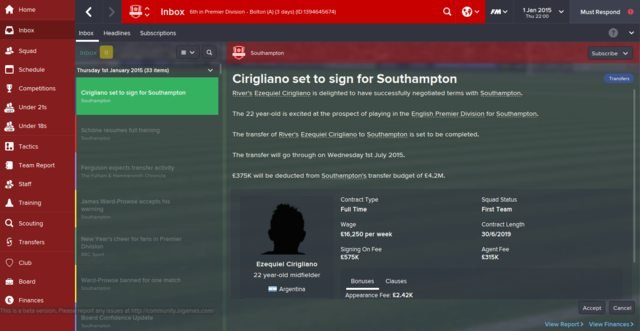 Other Features
Many other additions outside of these categories have been added in, of course. This includes "tunnel interviews", where you will receive a question or two from reporters as your team is just about to kick-off and just as you are about to leave the stadium after the game. In addition to the press-conferences, these add a lot of realism to the game.

Continuing on with the media, the variety of questions and answers has been greatly increased and I have even come across a possible answer where I could call another manager "deluded". This will add to the entertainment aspect of the non-match gameplay and will surely add to the relationships which you have with the press and with other managers.

There are plenty of new features in the game, many of which I have not even seen and I have been playing a lot of this game. The only way to find them is to continue playing and discover the little touches of class made by SI this year. 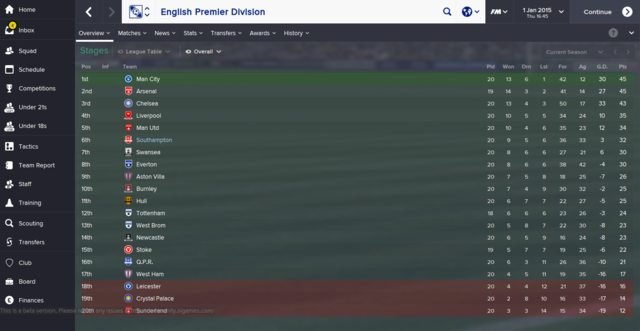 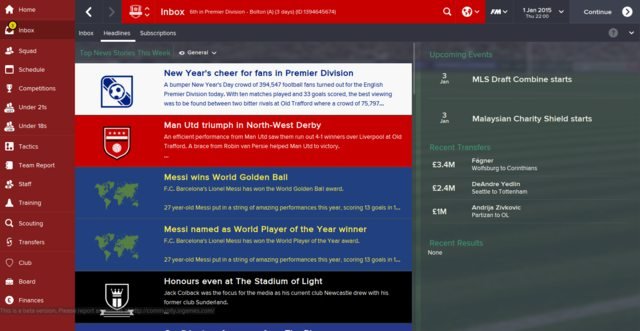 Review
While this game was not as revolutionary in overall development as FM14 was, a lot of changes have been made to the game to make it as life-like as possible. The Match Engine of the Beta was not the finished product, for those who played it and were worrying that this year's FM15 game would be a disappointment. It will be improved for the final release and will be much more enjoyable to play with. For me, I personally like the tactical system and I'm happy it hasn't been altered much. My only real criticism of the game is the new bar on the left. I would rather it stay a universal black instead of copying the colour theme of your current club as it would be rather distracting if you were managing a club who wear bright yellow. All-in-all, I am very happy with this year's version and I hope to enjoy a very good long-term save. Good luck to all of you FMers this year, and thank you Sports Interactive for producing a another great example of video gaming!