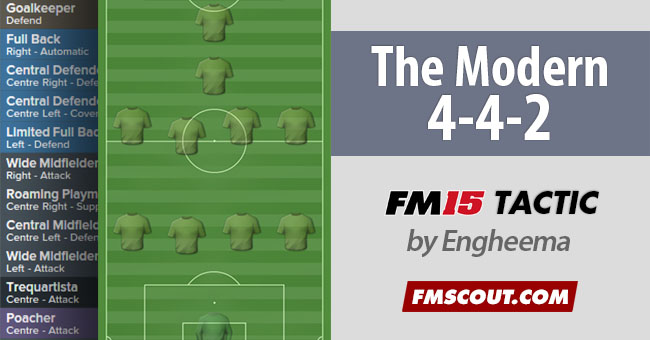 Most FM players, if not all, try at some point creating a successful 4-4-2 tactic. It is tempting to recreate the arguably the most famous formation of all time. The classical implementation of having two central strikers, a big man and a small man, and a double pivot central midfield pair usually fail in front of the more modern possession hungry and high pressing systems such as the 4-3-3 and 4-2-3-1 (which is in essence a 4-4-2 itself). However, the flexibility of the 4-4-2 allows it to adapt to the modern game by making subtle yet crucial changes, as Diego Simeone and Manuel Pellegrini have recetly demonstrated with Atletico and the Citizens respectively. Both are 4-4-2 in formation, but the setup can’t be more different from each other. My tactic here is based on my favoured 4-4-2 system of Atleti.

P.S: although my tactic is inspired by El Cholo’s Atleti, it is not a recreation of their style of play

Many tactical gurus much better than myself (yes Cleon, you!) have spoken in great detail and depth about the strengths and weaknesses of the flat 4-4-2. You can find Cleon’s great article here.

In short, the two main weaknesses of the 4-4-2 are:
1. Being too rigid in the midfield causing the team to play in straight lines
2. Being too exposed in between the lines for AMCs to exploit 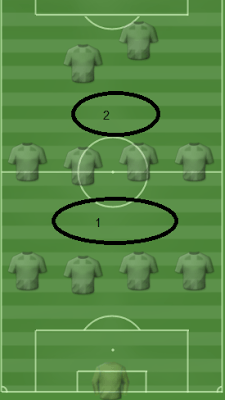 To overcome the first problem, you need to encourage dynamic movement by your players; hence a mentality of Fluid or Very Fluid is a must. For poorer teams, Fluid mentality combined with More Disciplined team instruction is sufficient to have more control over your team. This primarily solve our first problem.
In order to solve the second problem, we need to squeeze and remove the half spaces from between our lines (marked 1 and 2). Obviously the wide half-space 1 is much more dangerous to be kept open than 2, because a skilful and a pacey AMC can rip us apart from there. To remove this space, we need either to push very high up or drop very deep. The first option will make all the space behind our centre backs which in turn will make it easy for pacey and skilful strikers to exploit. The latter option gives the opponent more space to dominate possession and threaten our team more, especially if we fail to regain possession. However, the more attacking the opponent is; the more space that will be available behind his formation to exploit. And this is exactly what Atleti does. They pull the opponent quite deep and strike using the pace and skill of their widemen. Koke and Turan, in addition to the pace of their furthermost striker.

The half-space 2 can be nullified by using a very deep lying forward or a false nine, or by using a dedicated AMC. Deep lying forwards don’t really either drop too deep for my tastes, or don’t contribute enough defensively. I prefer using an attacking midfielder, to provide better defensive cover and create enough chances that the striker should only focus on scoring them

The roles in my tactic are as follows, and the type of ideal players I want. (Too much LFC reference since I’m a Reds fan and LFC players are the best I know!)

Left Centre Back: CD-C, Quick and strong centre back. (Varane and Hummels).

Right Centre Back: CD-D, Powerful, towering and hulking centre back. (Sakho and Kompany).

Full Backs: Limited Full Backs. Think of them as wide centre backs, with pace more important than strength. Good passing and vision is important as they usually launch direct passes to the forwards to initiate counter attacks. If you have balanced FBs, consider using FB-S (Filipe Luis and Jon Flanagan).

Left Center Midfield: CM-D, a sort of a centre-back in midfield. This will be our destroyer, requires being tall, strong and tenacious. The more creative the better as he can be instructed to play More Direct Pass from deep. I avoid DLP role to prevent the team playing mainly through him. (Nemanja Matic and Lucas Leiva).

Right Center Midfield: RPM, my favourite sort of player. Our runner is an engine and powerhouse in the midfield, required to do a range of defending and attacking duties. Expect him to bang a few goals too. The more round the better. (Jordan Henderson, Young Steven Gerrard, James Milner, Yaya Touré and Aaron Ramsey).

Wide Mids: WM-A, Think of them as wide Box to Box midfielders. They require high workrate to track back and cover defensively as well as provide our main attacking threat from the flanks. Ideally they are quick and technically proficient. Lazy players will unbalance your team. (Adam Lallana, Koke and Arda Turan).

Attacking Midfielder: Treq., This is our creator in the strike pair. He must be skilful with eagle vision and intelligent off the ball movement. Expect him to be your top assister and expect quite a few goals from him. (Philippe Coutinho, Luca Modric and James Rodriguez).

Striker: Poacher, Our scoring threat. A fox in the box, the quicker the better. He requires high rating in determination, off the ball, finishing and pace generally. The more rounded as a striker he is, the more he will score. (Luis Suarez, Michael Owen, Karim Benzema).

You should also tweak the TIs per your team. If you have quick wingers, you can Pass into Space. If your opponent uses DMCs, you can set your AMC to AP-A to allow him to run from deep. These small changes may be the difference between a point or three.

Without further (boring?) ado here is the tactic. Implemented in my Notts County save in my second season, after spending the first season and the first matches in the second season trying to prefect it. 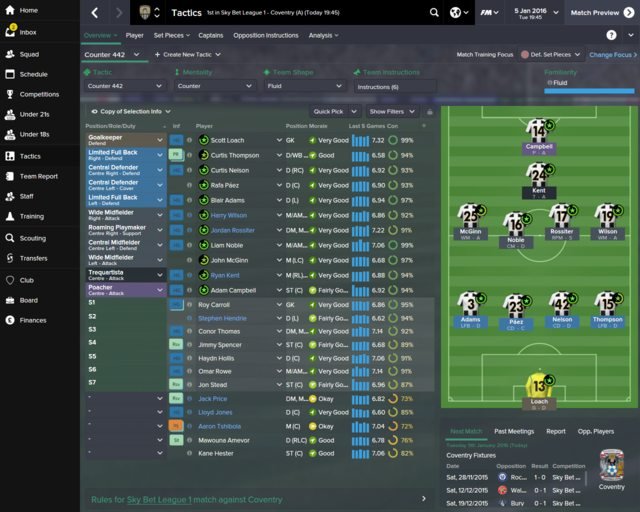 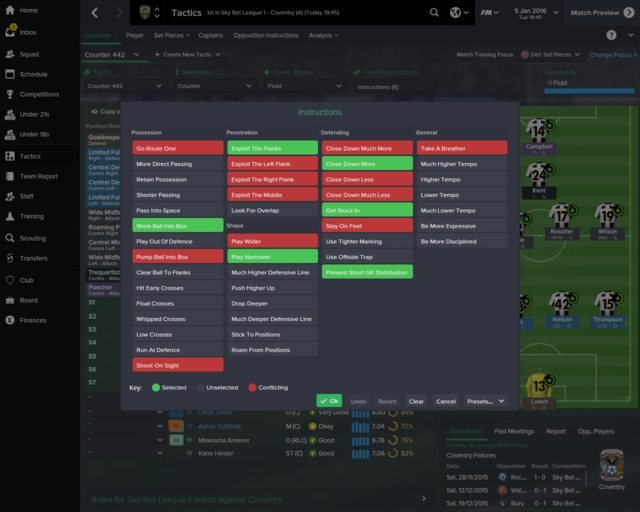 I started using the final version of this tactic since Bradford’s game. We conceded least in the league and we look deadly on the counter. Conceding 9 goals in 23 matches is quite spectacular given my average defence. My striker, Adam Campbell is flourishing in this style, scoring 15 in 23. 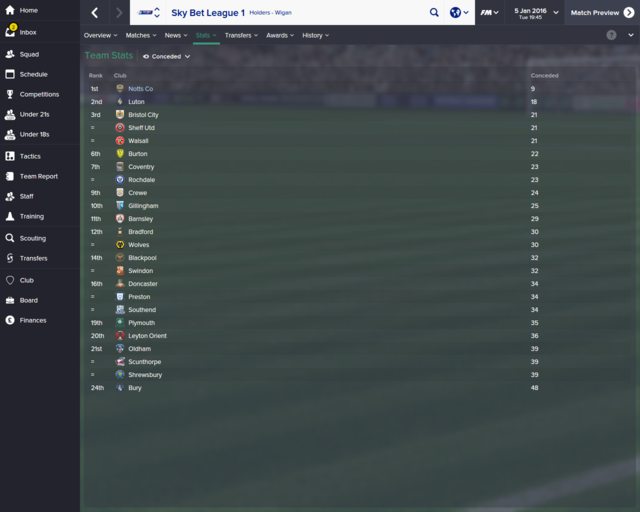 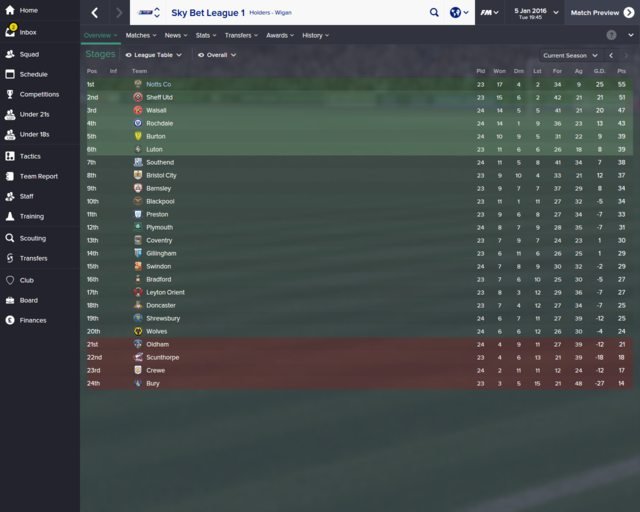 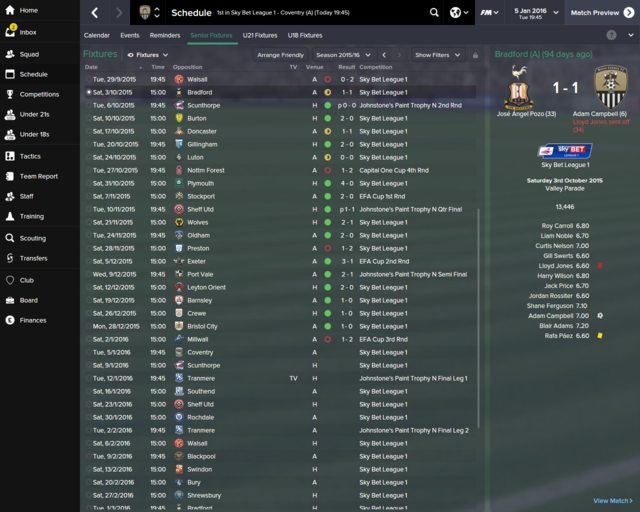 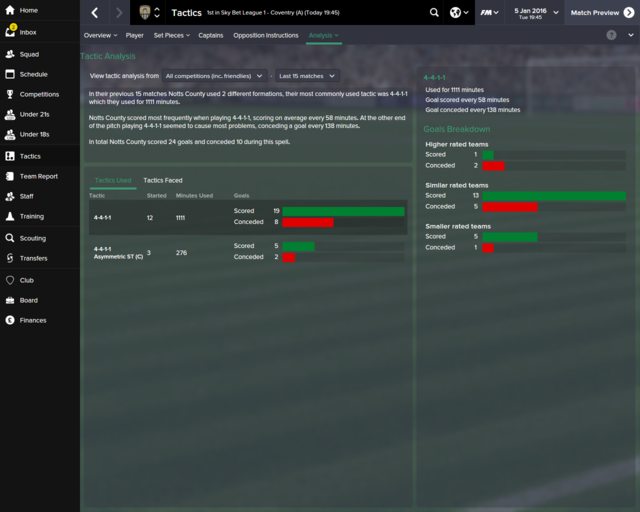 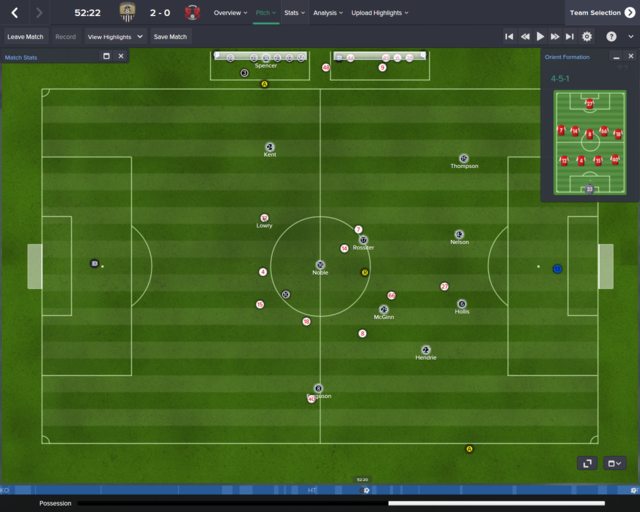 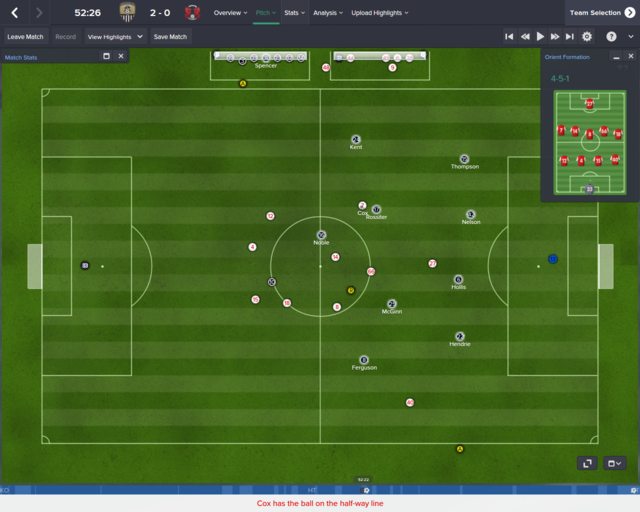 The team re-positions after losing the ball as Lowry plays a ball to Cox. Notice the narrow defender line relative to the midfield line. The AMC (Noble) also presses. 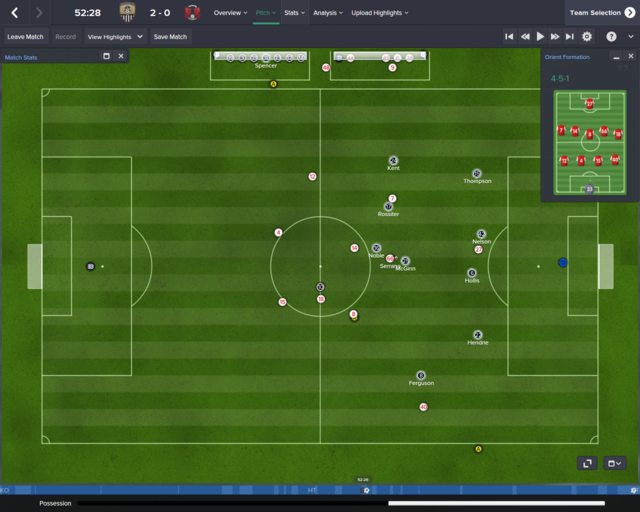 As Serrano receives the ball, he faces vigorous pressing from Noble (AMC) and McGinn (MCL). 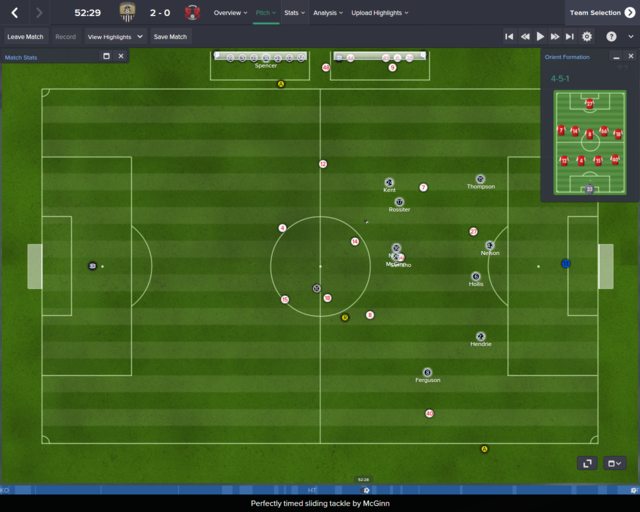 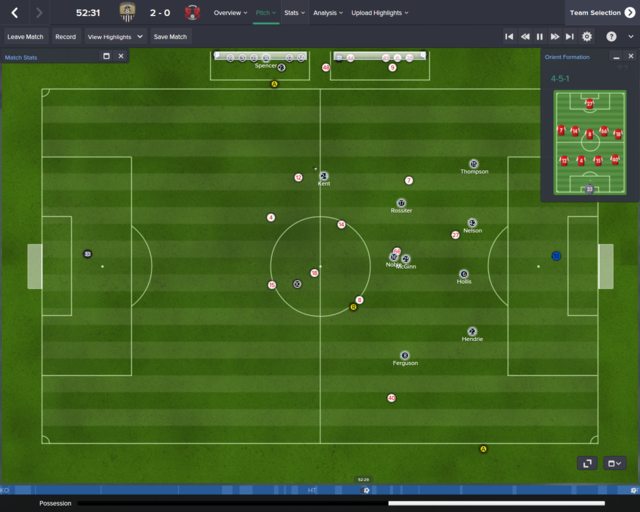 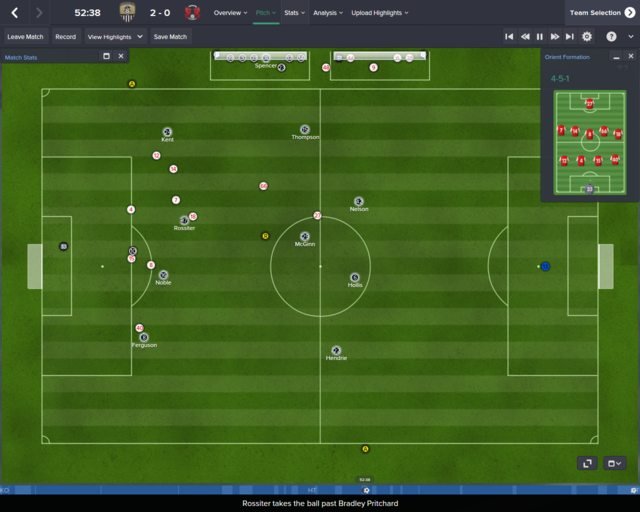 Rossiter takes the ball to the edge of the box and looks for Hester (ST). 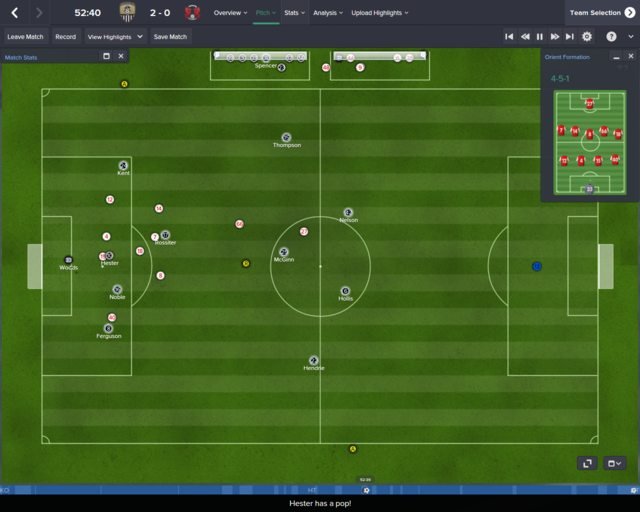 Hester shoots, their GK blocks it... 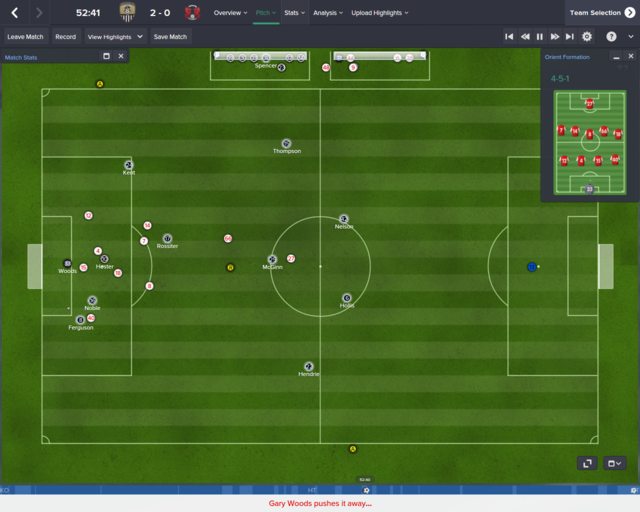 ... and it falls for Shane Ferguson (ML) for a simple tap-in.

In just 20 seconds from losing the ball, we played a lovely quick counter attacking move to score a beautiful move.