Wolfsburg were the team I used for my very first FMScout story, and it went surprisingly well and they are a team I will forever follow. They are currently doing very well in the Bundesliga and you will have to learn how to do well with them in FM15.

After having a relatively disappointing 2013-14 season, finishing in 5th place and missing out on the Champions League, Wolfsburg will be looking to strike back immediately and improve. Dieter Hecking is the current manager and has been 2012. During the off-season, Hecking dove into the transfer market and picked up some terrific players like Niklas Bendtner and Joshua Guilavagoui. If you use the latest update for FM15 you will also be able to use Andre Schurrle who transferred to Wolfsburg in the summer.

The Bundesliga is very competitive and you are going to need to get everything correct if you want to beat Bayern Munich and Dortmund in the first season.

So as you can see you are presented with pretty standard qualities of Training/Youth facilities for a top league. The further you get into the save the more you can upgrade it and eventually make a much bigger stadium.


When meeting the chairman of Wolfsburg, Francisco Garcia, he initially presents you with the measly budget of £0 and a wage budget of £4.8M. If you ask him to discuss it further he does not give you another choice and the same budgets will be offered.

In the bank, you have a balance of £26M which is projected to turn into £94M by the end of the season, so Wolfsburg are sitting on a very fair amount of money that allows for big improvements in the future assuming no takeovers or other events take place. This is the tactic that I used as a back up in FM14 but has worked really well for me in FM15. With the creative prowess of Kevin De Bruyne in the CAM (Advanced Playermaker [a]) Role he dominated the league, picking up 12 goals and 19 ASSITS in the first season alone. He is the key to this formation but it is important that the two wide midfielders have the pace to blast up the wings. I suggest playing Schurrle in the LM position (Winger [a]) and the same with Pione Sisto (FC Midtyjlland) who I purchased. They are both quick and have good shots if they need to cut inside, but the crucial part is the crossing towards Bas Dost at the (Target Man) striker role. Your go to wingbacks should be Ricardo Rodriguez (Wing Back [a]) and Christian Trasch (same) who are incredible always. The CB’s Naldo and Knoche should be still on CB [d] and same with Benaglio in goals.

The mentality should be counter attacking and fluid. 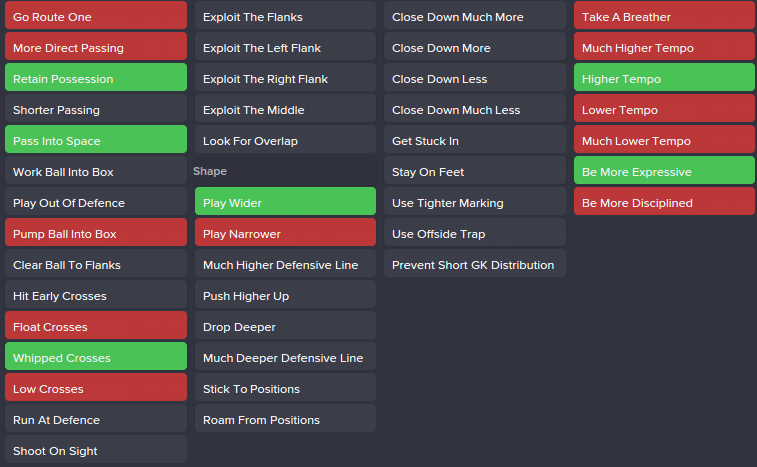 
This formation may be one of the go to formations in Football Manager, but you can’t not use it if it works. So once again I suggest that you leave the defenders and goalkeeper (Benaglio, Ricardo Rodriguez, Naldo, Knoche and Träsch) all on the standard player roles. The CM’s are a lot more important in this formation as they control the play. Luiz Gustavo should be playing as a defending Ball Winning Midfielder, due to his strength and composure. The other midfield role should be in a deep lying playmaker role with the support duty Joshua Guilavagoui will be able to fill that role while he is at the club but a long term option should also be scouted for after his loan deal finishes. Lucas Romero, Tielemans and I even played Dorin Rotariu in the CM role and he worked well.

I found with Wolfsburg that the same instructions worked over all three tactics, it was very strange but I only lost 3 games in the first season. Two being to Bayern and one to Stuttgart. You can edit them if you want but I would suggest the same.

The mentality should be attacking and fluid.


A bit of a stranger formation for Wolfsburg and very different to the ones that I have proposed already in this guide but still very affective. The triple CB pairing of Timm Klose, Naldo in the middle and Knoche on the right worked well and shut down the opposition. This formation is used for the big games, the Dortmund, Bayern and important Europa League games where you need to lock down. The same midfield pairing of Gustavo and Guilavagoui using the ball winning midfielder (d) and deep lying playmaker (s) should be used. De Bruyne is key in this formation for linking the midfield to the two attacker, the Advanced Playmaker role [a] will work well for Kevin in this one. The two strikers compliment each other extremely well. Andre Schurrle is fast and a good small space dribbler, while Bas Dost is tall and a terrific header of a ball who can kick the ball very hard. Bas Dost should again be playing as a target man and Andre Schurrle as a false nine who can link the play.

The mentality should be counter and structured.


Goalkeepers – Diego Benaglio is currently the captain of Wolfsburg and the number 1 goalkeeper. He has been at the club since 2008 and is one of the best players in your squad. His backup is Max Grun who can step up if needed but if you have a big game (Bayern, Dortmund) he would not be one to play. I would suggest getting some potential scouting options for a youngster who you can tutor. But because you don’t have a transfer budget you will either need to sell on some dead wood or bring someone in on loan.

Right Backs – The first choice is Christian Träsch who is personally one of my favourite right backs in the game. He is a very good choice and at 27 he will last a few more seasons playing at the top of his game. He also is presented with some good choices of backup with Patrick Ochs and Sebastian Jung able to step up if something was to happen to Träsch.

Centre Backs Arguably the position with the most depth in Wolfsburg, you are lucky to have a good mixture between potential and current talent. The best CB option right now is the Brazilian centre back Naldo he will only be the best option for a season however as he is now 32 years of age. He is tall, strong, great heading and if needed he can kick a ball very hard. His partners in the CB role are Felipe, Timm Klose and Robin Knoche, all who are first team quality.

Left Backs – Ricardo Rodriguez is arguably the best LB in Germany right now and you are lucky enough to have him on your team. He is very talented and at the age of 22 he will be able to go for a while. Assuming you do not get him injured you will be good to go. The backup however is Marcel Schafer who is talented enough to play if you need to.

Central Midfielders – Another position of great talent for Wolfsburg where they have many players who can play in a variety of roles. Luiz Gustavo is the strongest player, by rating and in the statistics and he is a very good Ball Winning Midfielder or Box to Box Midfielder and he will prove very important to your team if you want to succeed. His partner in crime is Joshua Guilavagoui who is currently on loan for Atletico Madrid and is a bit more creative then Gustavo. The more creative options are Maxamillian Arnold and Aaron Hunt, both young and plenty of years ahead of them.

Wide Midfielders Talent is brewing on either side of the Wolfsburg side and the recent addition of Andre Schurrle only makes it better. Leading the wing is Andre Schurrle, the recent £23M signing from Chelsea. He is backed up by the talented Croatian Ivan Perisic who is versatile enough to be able to play on either side. Vierinhina is also talented and can step into the side if he is needed.

Central Attacking Mid – Kevin De Bruyne is hot on the radar of a lot of big European sides and that is because he is class. He can play most roles in the CAM and he is the number 1 choice on the team sheet each week. He is very consistent and performs in the big games. If you were to get a VERY good offer for him, Maxamillian Arnold and Aaron Hunt are both strong enough to step in.

Strikers – Bas Dost is a tall, strong tank who can kick a football very hard. He is another player who is crucial to a good first campaign and I strongly suggest not selling him. Your second choice striker should be Andre Schurrle and push Vierinhina onto the wing. Niklas Bendtner is also good enough to play in the first team.


This Wolfsburg team is very strong and once you have a set first team it is very hard to break into. But depth is still needed. In the striker position you need someone who can back up Dost. Someone tall and strong. In the central midfield you need a creative youngster, personally I trained Dorin Rotariu to play here and he did very well. More depth is needed in the CB role after Naldo gets to old. I hate to say it but Balanta is the perfect person to fill the role, also look at Eric Dier, Vallejo, Rekik. Moving on ‘dead wood’ is also important to free up some cash in the clubs budget as well.


Wolfsburg are turning into a competitive club in a competitive league and being successful in season 1 can happen if you get everything to click. Wolfsburg have all the makings of a team that you can take deep into Football Manager. Star players, strong finances and a terrific fan base.

Thanks everyone for reading, leave any advice in the comments and tell me about your experiences with Wolfsburg.