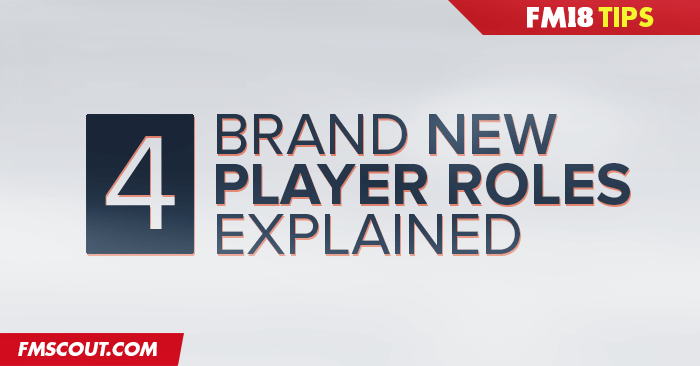 Sports Interactive unveiled the 4 new roles which are being introduced in Football Manager 2018 on one of their feature reveals videos showcasing some highlights behind the whole tactical revamp they've worked on.

The new roles are all situated in the midfield area.
These are namely the four roles: Segundo Volante, Carrilero, Mezzala and Inverted Winger. 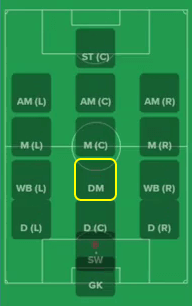 The Segundo Volante role can only be assigned on the DM spot. It can have Defend, Support or Attack Duty.
Here's the official description of the role:


The 'Segundo Volante' is different from the Deep-Lying Playmaker in that their role is primarily a defensive one best suited to being paired with an Anchor Man, and is also different from the Ball-Winning Midfielder, in that they often run with the ball, or arrive with a late run, into the opposition area in much the same way a Box-to-Box Central Midfielder does.


This tells us Segundo Volante is best suited with a defensive duty and paired with another player also on the DM spot (as in DMCL and DMCR), hence the title "segundo" (second).

Players who would be a good match for this role:
Fabinho, Emre Can, Danilo Pereira, Thomas Partey 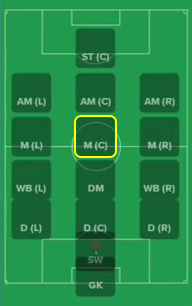 The Carrilero role can be only assigned on the MC spot. It can only have Support duty.
Here's the official description of the role:


The Carrilero - or "Shutter" - is a supporting role more often than not utilised as part of a midfield three, or as two central midfielders in a diamond midfield. It is the job of these shutters to cover lateral areas of the pitch and link the defensive area with the attacking midfield area. This is what separates the Carrileros from a Box-to-Box Midfielder, as they are not expected to shuttle between boxes, but merely between lines of the midfield.


This tells us Carrilero is more of a glue player who links your defense with your attack, moving between lines. Best suited to formation with 3 central mids or 2 central mids in narrow diamond. It's a role that should require a lot of stamina and high work rate.

Players who would be a good match for this role:
Casemiro, Eric Dier, Jordan Henderson, Morgan Schneiderlin

The Mezzala role can be only assigned on the MC spot. It can have either Support or Attack duty.
Here's the official description of the role:


Similar to a Box-to-Box Midfielder but with less defensive responsibility, the Mezzala gets into attacking positions that an Inside Forward would usually be found in.


That description is clear enough. Player is more offensive minded than a BTBM and moves in channels an IF would normally move. This is the more offensive role out of the 3 new ones in the centre of the midfield.

Players who would be a good match for this role:
Axel Witsel, Radja Nainggolan, Sergej Milinkovic Savic, James Milner 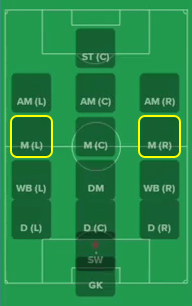 The Inverted Winger role can be assigned on the ML or MR spot. It can have either Support or Attack duty.
Here's the official description of the role:


The Inverted Winger aims to frequently cut inside into the attacking third to open up space for overlapping full-backs and to subsequently overload retreating defenders. The Inverted Winger works best when the player's strongest foot is opposite to the side of the pitch he's playing on.
With a Support Duty, the Inverted Winger will cut diagonally across the defence to play the ball through the middle while overloading defenders and defensive midfielders ahead of the penalty area.


This seems similar to an Inside Forward, but remember this role cannot be selected on the AML/AMR spot. The player will move diagonally towards the AMC area and beyond in order to make space for the full-backs going forward.
The movement should be similar for either duties, except the IW will likely look to score when having an attack duty (therefore he would need finishing).

Players who would be a good match for this role:
Giacomo Bonaventura, Senad Lulic, Marc Pugh, Florian Kainz