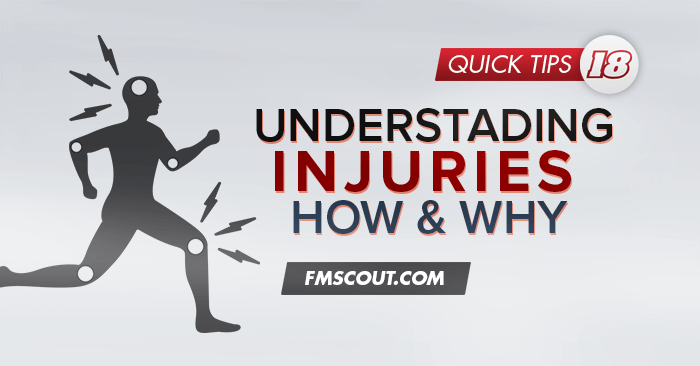 There are numerous complaints when it comes to injuries in Football Manager 2018. Some people believe the amount of frequency of injuries is not realistic at all. And this annoyance turns into grief, when those great new signings you have just made, somehow suffer an injury shortly after arriving at the club you are managing.

Sports Interactive have always insisted that injuries are perfectly realistic in-game, and it's no different with FM 2018.

There are certain factors that can affect injuries for your players. And there are certain things you can do to try and keep injuries under control by being proactive and understanding what's causing them.


For FM18, we have a number of official insights on injuries, which I'm going to list below. The average numbers per season have been calculated by Sports Interactive.

How many injuries should be expected over a season?

In the real life English Premier League, there are 1,400+ injuries per season.

How many injuries should I expect my team to suffer in a season?

There is an introductory injury news item sent from your medical team that will highlight the expected number of injuries for your team that season. For an average English top division club in 2017/2018 this could be expected to be around 65. It is important to note that this is an expected average, clubs will certainly fall outside of this on occasion as they do in reality.

How many injuries should I expect per match?

On average there are 0.6-0.75 injuries per team per match. The proportion of these that will enforce a substitution varies depending on the injury type. All major injuries require a substitution.

Injuries are influenced by:
The Medical Centre will feedback to you on each player’s injury risk. The above factors all combine to give a player his Overall Risk, when this becomes High or Very High you should look to address the above in order to lessen this risk, especially in players particularly susceptible to injury. The main factor contributing to a player’s heightened risk will be referenced, for example “Team training focus”. Whilst in the short term a heightened injury risk can be acceptable and even preferable in order for optimum training development, over the longer term it is not recommended.

Some players are simply more injury prone than others, or have a number of recurring injuries. See a player’s Injury Susceptibility for some insight into this.

Pre-season is also a vital part of the season, especially when it comes to building up your players’ Condition and Match Sharpness in order to avoid an early season injury crisis.

How many first team injuries are realistic to expect at once?

English Premier League clubs in reality often have anywhere from 0 to 12 first team injuries at once. Anything in the 4-8 range would be considered normal.

What impact do the Physio and Sports Scientist have?

Physio – Key attribute: Physiotherapy. Treats injuries that are not treated by an outside specialist or the club doctor, a better physio may slightly reduce treatment time. Estimates time out for injured players, a better physio will be more accurate. Presents information on injuries within the club, for example current injuries and statistics on these. Responsible for taking over the Sports Scientist’s duties if none is employed (using the Sports Science attribute).

Sports Scientist – Key attribute: Sports Science. Reduces the likelihood of certain injuries. Slows the rate at which players become jaded. Provides feedback on a player’s injury risk and injury susceptibility, a better Sports Scientist will be more accurate in his assessment.

What are recurring injuries?

A recurring injury is a specific injury that a player is susceptible to suffering from. Sending a player to a specialist when this injury flares up can on occasion cure it and remove its recurring status.

What are injury relapses?

An injury relapse is when a player suffers a recurrence of an injury that they have just recovered from. This can be brought about by over-training or overplaying too soon following recovery. Players that are “orange injured”, i.e. in light training, have an increased risk of this occurring if selected to play in a match.


While we don't disagree with SI that injuries may be as realistic as possible when compared to real life, this doesn't mean an injury crisis is fun; especially if certain key players of your team are on the injury list.

You can choose to accept the situation and adjust things in your team accordingly. That's the hard way for those of you with ample patience and solid anger management skills.

Or you can choose to cheat your way out of an injury crisis using a real-time editor, in case it's getting out of hand. Of course that's the easy way, but hey, no judging. Or if you don't like full on cheating, you could mass edit your players and lower their injury proneness attribute...