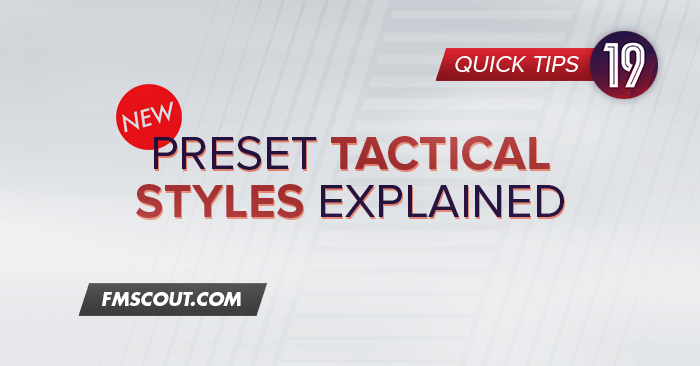 For me, what is most exciting about the new game is the Football Manager 2019 tactics revamp. With about a dozen preset tactical styles to choose from, it means there is just so much to try out.

Let's take a look at each of the new tactical styles / philosophies we can choose from on FM19 and try to explain what each style is about. Wenger’s Arsenal? Southampton? All I can think this would be is slow build up play, low intensity pressing, a packed midfield and not counter attacking. You're likely need Inverted Wing Backs, great passers in the midfield area and Ball Playing Defenders.


A tactic that focuses on retaining possession and pressing high to win the ball back. Looks to play out of defence and create chances through patient, short-passing build-up play. 
Gegenpressing relies on every player in the team working hard and, above all else, being fit and mobile enough to press the opposition immediately after losing the ball.

2008-2012. Guardiola’s Barcelona. Del Bosque’s Spain. Brendan Rodgers’ Swansea. A positive philosophy that focuses on ball possession and systematic attacking waves. Playing out from the back will likely require good composure and passing ability. Inside forwards will allow supporting Full Backs to support either by overlapping or underlapping.


Tiki-Taka places the emphasis on the short passing, extreme pressing and movement, waiting for space to open up as opponents lose focus. An extreme variant of the Control Possession style.

Liquid football. Intent. Sarri-ball. This is surely most people’s #1 choice when it comes to selecting their first philosophy (either this or Gegenpressing). A few years ago, the idea that Tiki-Taka is boring was (and still is) en vouge. Many teams found ways to overcome it, most through impressive organisation. But technical ability in football has greatly improved and players can play long and accurate ground passes with great first touches at the other end of the pass. A slightly more direct approach than Tiki-Taka. Will have to be incredibly fluid with this tactic


A quick passing style of possession and movement, with a narrower, more direct approach than the standard Tiki-Taka.

This reminds me most of Ferguson’s United. Maybe not the side of 2008, maybe a little before that. The idea to play wide, have overlapping Fullbacks all trying to cross into 1 or 2 strikers in the box has gone a little out of fashion at the top level of football although it is still a more than viable tactic in the lower leagues. Your wing players will need great crossing ability.

Positions of maximum opportunity. A little before my time although I think everyone is well drilled on what route one is. Extremely direct play and quick transitions are the bread and butter for this philosophy.


The aim is to try to play the furthest forward pass available, with the intent to penetrate the opposition's penalty area as early as possible.

Manchester United 2008. Roonaldo. Although Manchester United were arguably more positive the philosophy would suggest, they were certainly fluid and counter attacking. This is my favourite philosophy to try in FM19. The idea of having a low line of engagement to invite pressure may seem negative although it can be devastating for the opposition. Players will need the physical attributes and off the ball ability to move up the pitch at lightning speed.


Looks to draw the opposition forward to leave them vulnerable on the break. Players will be fluid on the counter, trying to combine with each other and carry the ball with clear intent. Leicester City. Vardy’s infamous party. They took the league by storm by playing a relatively simple way to a very high standard. A nice low and narrow defensive block, inviting pressure from the opposition before quickly releasing to an outlet (Vardy) meant that teams couldn’t cope with the gaps that they had left behind whilst attacking.


Draws the opposition forward to leave them vulnerable on the break. Players will look to move the ball forward as quickly as possible on the counter-attack to exploit spaces in behind.

The Door Bolt. Old Jose. With Porto and Inter Jose mastered the art of nullifying the opposition. Copying this in Football Manager can be incredibly rewarding. Identifying a dangerous player in the opposition, altering your tactics slightly and seeing the “threat” get a 5.9 match rating and a 46’ substitution is what gives us the confidence to apply for actual managerial roles in football. It is hard to pinpoint a modern tactic for this (historically 5-4-1 with Libero) but it's about nullifying threats. Will likely need Defensive Wingers against overlapping Wing Backs, Fullbacks against Wide Target Men and physical presence in the center of the pitch.


A defence-focused style that primarily looks to deny the opposition goalscoring opportunities. A Libero is traditionally deployed to offer cover behind the defensive line.

New Jose. Probably a little harsh although it has become synonymous with the Manchester United manager. I suppose this would just be time wasting, cramming more defensive players onto the pitch and playing a nice 5-4-1 or similar. This would surely only be used in 2-legged European games.


Players will look to get behind the ball and protect their defensive third, focusing more on the clean sheet than on possession.

Clean Slate - Create Your Own Style

The Carlo Ancelotti. Cramming all of your good players into a 5-1-3-1 WB DM Asymmetric AM(L). No, he’s not that extreme but trying something new and becoming the new tactical innovator in world football is what the game is about for me. I’m personally interested to try something with a low line of engagement, high defense line, high pressing intensity, counter-press, counter, narrow width, high tempo, short passing.


Please note this is a work in progress; will update this article as new information becomes available.