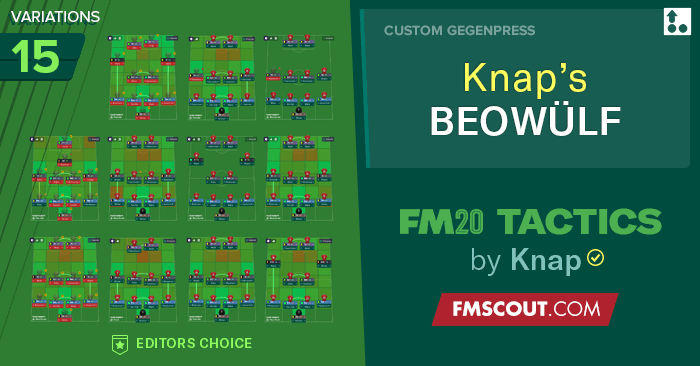 Wing play, looks of crosses (wing men to be on side of preferred foot), solid and compact.


Beowülf was THE best tactic on FM19, with the wide midfielders acting as both wingers, and extra set of wingbacks. The mezzalas created incredible amounts of chances for the pressing forwards to score. It almost did not concede goals either. Now it is back, redeveloped by Knap for FM20, and it is still great for 442 lovers!

The two strikers are gonna score loads of goals. One will probably get more assists, and the other goals.
DLP will get some assists as well via through balls.

This set of tactics is very disciplined out of possession. The midfield goes to a flat 4 turns into a flat 442.

Simple shape, suitable for most sides with pretty general roles.

Two Advanced Forwards harass the opposition out of possession and sit on the shoulder, leaving room for both Wingers to cut inside or hug the line.

What's included in the BEOWÜLF Bundle of FM20 Tactics

You will find 18 variations of Beowülf Tactics inside this bundle. They all apply to 20.3-20.4 Match Engine versions (mostly 20.4).

Beowülf should be suitable to most teams, as it's a simple shape with pretty general roles.