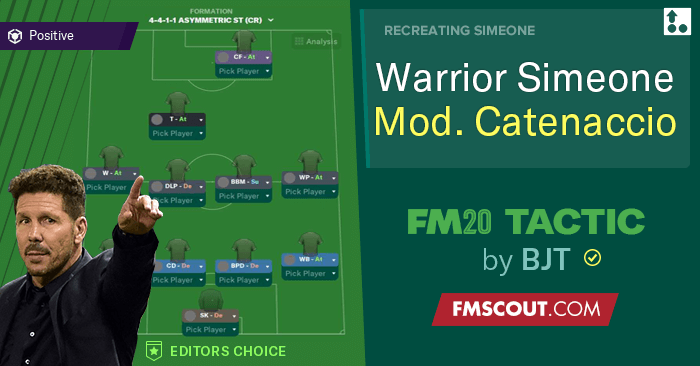 Please Note – given the objective was of creating a modern catenaccio system, with the current ME it’s not going to be the most consistent or successful system.

And like Diego Simeone, his teams are highly combative but are solely reliant on individual quality in the final third. They aren’t the most free scoring side, so breaking down defensive teams will be a problem.

So you aren’t going to get massive point totals with this tactic used on its own – but what you will get is to see your side be competitive and defend like warriors on the pitch, Italian and Diego Simone style.

Following a personal request to create a Diego Simeone tactic, I’ve tried my best to create something that resembles his philosophy.

This tactic will incorporate talents throughout his time at Athletico.


A mix of Italian and Spanish Football

There were two main routes I could have gone. The defensive / route 1 tactic focusing on extremely quick transitions after absorbing large amounts of pressure on the back-line, or the more Spanish styled controlled possession in looking to break down weaker opposition and in the first instance, press high up aggressively.

I went with the later as I found results a little more consistent using this approach – which is what you would expect, as when facing the more defensive sides you’ll struggle more to break them down when playing very deep and purely looking to hit with speed.

And at this point it was then choosing how high a defensive block to play with. Higher would probably have been more effective and has been used by Diego at certain times. The mid-block comparatively is more often used more as a containing job and would be less strenuous on the back-line compared to the lower block.

However irrespective of this ME, I’ve decided to play a retreated lower-block Catenaccio style on the positive mentality - which can be considered a defensive mentality in itself. It’s different to the normal, and it is what Diego has become famous for – that solid two banks of four ahead of the keeper playing deep. My conscience would not allow me to produce anything other.

So here it is explained, and I hope you enjoy this approach taken.

Although Simeone most of the time uses a bog standard 442, he has fairly frequently dropped a striker a little deeper to play in behind the front man. This could be in a 4231, but with Griezmann playing much like a Trequartista, I’ve gone with an Asymmetric 4411 formation.

Having him drop that little bit deeper, I hope it will also bring about some of the more fluid counter-attacks Athletico Madrid are very capable of producing instead of the Route 1 direct counter approach.

He will also move wider to give the outlet down the channels, especially when our back-line is put under some prolonged pressure.

Alongside him is Diego Costa on Complete Forward attack, with all the attributes of a deep lying forward, a target man and poacher. He’ll be the other focal point of our attack, and will be the player to holdup the ball out of the two strikers, and to help allow our side to move up the pitch.

As above, with the more Spanish and passing football approach taken, I’ve gone with the positive mentality.

I watched a game just the other night, and got to see them play some slow and patient, probing build up, resulting in a lot of attacks coming down the right from Kieran Trippier, who also launched long throws into the box at every opportunity.

Not a lot has changed on the Athletico right flank from a few years back. I really liked Atletico when it had the Turan and Valero combination back around 2014 time. Valero always there on the overlap, and would dribble frequently looking to get to the byline.

So the right side is filled with a Wide Playmaker on Attack, along with a Wing-Back on attack on the overlap. This instead of the full-back, to supplement the more positive passing approach taken.

On the left hand-side I’ve gone with Lemar playing a more natural game. With the system employing an extremely narrow width, naturally the winger cut into the middle and play closer to the strikers giving room for a full-back on the outside.

And so he’ll be supported by the very dependable full-back in Filipe Luis. Crossing either from deep or from the byline, he’ll give added options to maintain the fluidity of our offensive approach play.

The centre midfield slots are filled with a DLP-D on defend, and a BBM that will get forward more often. Simeone has been willing to allow Llorente to get forward frequently, and you just need to look at his goals against Liverpool proving his effectiveness here.

A standard 5 at the back Catenaccio involves the flat-back four defenders all on tighter marking including the wing-backs.

And watching Atletico, it looked like both full-backs were tasked to mark their flanks tighter. So all four defenders have tight marking implemented.

Rather than having all players retreat and pressing in our own half, with the approach to be more pro-active in achieving the win I’ve implemented counter-pressing and a very high line of engagement.

Simeone has used this in the past, with the aim of stifling a Juventus side’s ability to build up from the back and allow their offensive wing-backs comfortably ease into the play.

I also have a Sweeper Keeper on defend duty – there may be times the team does get caught high up and unable to retreat quick enough into the positive mentality low line / retreated lower block. And rather than long-kicks directed to the flanks or target man, aiming to roll to the full-backs seemed to compliment this particular style of approach play.

Looking at Simeone, his league performances have a highest points total of 90 winning the league that year, with 88 his second best. He’s also won the Copa del Rey and Europa League.

So he does win trophies, but will never hit the higher point totals playing in this Catenaccio style. I’ll be happy if I can replicate success anything near to this.

Here are my most positive results:

Well this test run brought my best ever defensive performance in football manager. Clearly the players were in a warrior’s mood in this particular season. We conceded just 9 goals in the league, and only 1 at home all season.

My best points tally with the Catenaccio system with 96, which given the system’s generally more negative approach whilst being a favourites team I’m very pleased with.

Winning the ECL was the icing on the cake – beating Real 1-0, another clean sheet.

We had 32 clean sheets in the EPL season overall – very pleasing.

This hit the Simeone points mark, or thereabouts. We only lost the one league game all year and had the meanest defence. So objective in the domestic league achieved here.

An amazing season this one. Scraped top spot in the league, but also won both the Serie C cup and end of season Serie C Super Cup. A treble in Italy’s basement league on the game, Simeone would be proud of my warriors.

I would say this tactic is inconsistent overall when coming to league point totals. But like Simeone’s sides, they are always very competitive and will be a tough side to beat – but will struggle to win enough games to win the league consistently.

The great emphasis on a low-block will mean the opponents won’t be put under the cosh for extended periods of times, and against sides that are happy to stifle a team that plays catenaccio will mean you’ll struggle to win these sort of games.

With that said, in a good year it can bring some really satisfying results. 9 goals conceded all year is my finest defensive achievement in football manager – thanks to the Simeone philosophy.