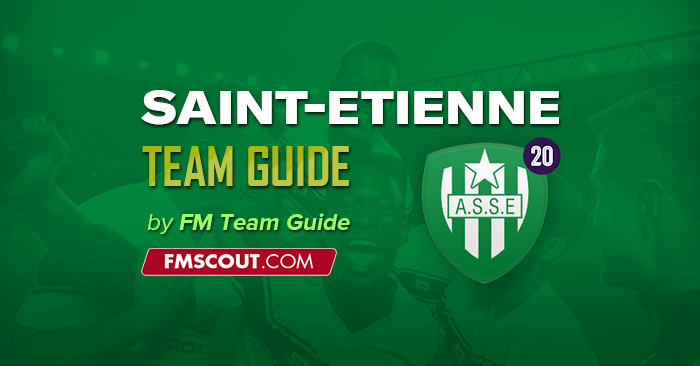 Forget PSG, Monaco, Lyon, Marseilles and the rest. In terms of title wins St-Etienne are the most successful French club of the professional era.

Their greatest period stretched from the mid 60’s to the mid 70’s during which they won 7 Championships in 10 seasons. They also reached the 1976 European Cup Final only to be unfortunate in defeat to the great Bayern Munich team of Muller, Beckenbauer and Rummenigge.

The following season they were again unlucky in defeat in the quarter finals losing to eventual winners Liverpool, David Fairclough’s famous late winner typical of their experience as nearly men in the competition. The signing of Michel Qatar Platini in 1979 was a real coup though and a sign of their ambitions.

In 1981 they won the 10th Championship in their history but a year later Platini left for Juventus. That same year a financial scandal engulfed the club (St Etienne not Juve, they’d never do any dodgy stuff) and the fall from grace began. Just 2 years later ‘Les Verts’ were relegated to Ligue 2. 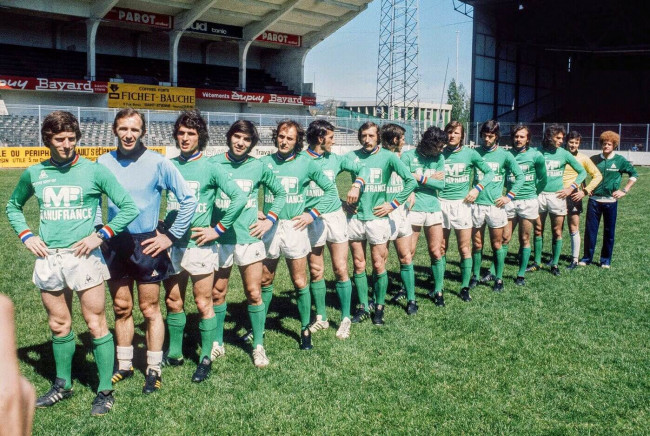 The 1976 squad with the legendary coach Robert Herbin.

Ligue 1 isn’t exactly full of rich clubs aside from Lyon and Paris Sportswashing Germain, the figures look low but most Ligue 1 clubs on FM20 have a balance below £30m. The projections look ok and you have a reasonable transfer budget compared to most of the rest of the league. Worth noting also that you will receive annual installments of £7m for the next 3 seasons as part of the deal to sell William Saliba to Arsenal. GOALKEEPER
1st choice Stephane Ruffier is entering his 9th season at the club and as vice captain is a highly influential presence at the back. Jessy Moulin is an ok back-up but no more. Spending priorities are elsewhere for the moment.

RIGHT BACK
Debuchy will be one familiar to Premier League fans. The former Newcastle player and Arsenal spectator is still going strong at the age of 33 and has good all round attributes. Spaniard Palencia isn’t great in possession but can improve. All good here for now.

CENTRE BACK
As mentioned previously Saliba has agreed a move to Arsenal but as part of the deal you retain him on loan for the 1st season. Lacroix is limited technically and his mental attributes suggest he lacks a bit of fight, he’s entering the final year of his contract too so should be moved on immediately. Kolodziejczak (big thanks to Ctrl, C and V for that one) is a useful loanee for the season. Loic Perrin is an experienced and dependable captain but at 33 a replacement will be needed eventually. A signing is needed now along with further additions when loanees return to their clubs.

LEFT BACK
Peruvian new signing Trauco is a good all rounder but reserve Gabriel Silva simply isn’t up to scratch and should be moved on at the earliest opportunity. CtrlCandV can cover here but that may leave you short centrally. A cheap reserve would be good, the bulk of the budget needs to go elsewhere though.

RIGHT MIDFIELD
Honorat is an ok backup winger who can improve but Hamouma is limited and past his best. An upgrade is definitely needed.

CENTRAL MIDFIELD
Assane Diousse is a promising deep playmaker and the on loan Aholou is an excellent box to box midfielder. Yann M'vila is a classy holding midfielder and one of the best players at the club. Teenager Zaydou Youssouf is one to watch also. To add to this Yohan Cabaye is still a classy player at the age of 33, with high mental attributes and a technique of 17 he can still contribute massively. This is perhaps the strongest area of the squad so a formation involving a 3 man midfield could be the way to go. Further up the pitch Boudebouz is your set-piece king, implementing routines and focusing training on making the most of his deliveries will make a huge difference.

Boudebouz excellent delivery from set-pieces should be exploited.

LEFT MIDFIELD
Wahbi Khazri may have failed to deliver at Sunderland but in his defence he was having to play for Sunderland. He’s your highest value player and was the club’s top scorer in the 18/19 season, he’s also capable of filling in as an ACM or up front. Nordin is a good prospect and new signing Bouanga can be effective when cutting in. Monnet-Paquet is an adequate backup but no more than that. You’re overloaded in this position and can afford to lose at least one of these to generate extra funds.

STRIKER
The squad is so lacking in options here that Lois Diony is the only out and out striker in the first team squad and he lacks the composure required to be relied upon for goals. This position and right midfield are the key areas to prioritise when making moves in the 1st transfer window.

Centre back Moukoudi is maybe the pick of the bunch. He can be a squad level player when he returns and save you money for the top centre back or 2 you will need in time for the 2nd season. There’s little else of note so much will depend on your development of youngsters. Which leads us to...

The likes of Payet, Gomis and Matuidi have played as youngsters for the club in previous years. Currently the most promising is young goalkeeper Stefan Bajic who is in the under-19s but can develop into your future number 1. Benkhedin, Abi Tormin and Fofana are amongst several others with good potential. You will be so badly lacking the financial muscle of the top clubs that long-term success will likely depend on how well you develop these young talents.

Bajic if developed properly can become an excellent keeper and your number 1 for years to come.

The current assistant manager is Jacky Bonnevay but his underwhelming coaching attributes could make him a man to be replaced. The rest of the first team staff are of a good level though and the medical and scouting departments are particularly strong. Staff are required at u-23 and u-19 level as they are lacking in both quantity and quality, the right appointments will be vital in young players development. The club could use a Technical Director to ensure the staff improve in tandem with the youngsters.

Board expectations are initially to secure a top half finish but you have to aim higher. Qualification for the Champions League would of course be transformative for the club status and budget but is a big ask in the 1st season. The longer term goal is to bring the real glory days back by adding to their 10 titles, after all PSG are currently on 9 and huge favourites to draw level with you in the 1st season. If you like a really tough long term challenge, they are still waiting on that European trophy.

I hope you’ve enjoyed reading this.

Discussion: AS Saint-Etienne Guide for FM20