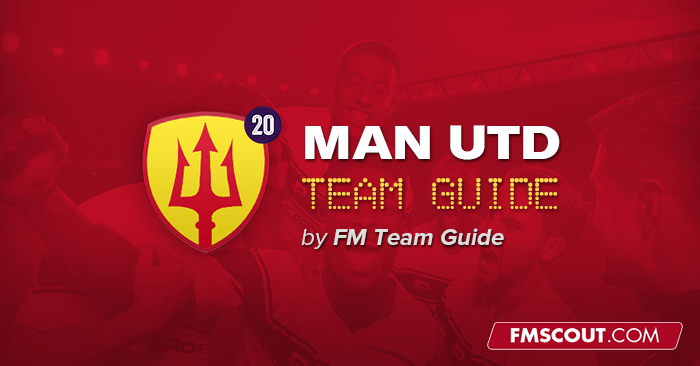 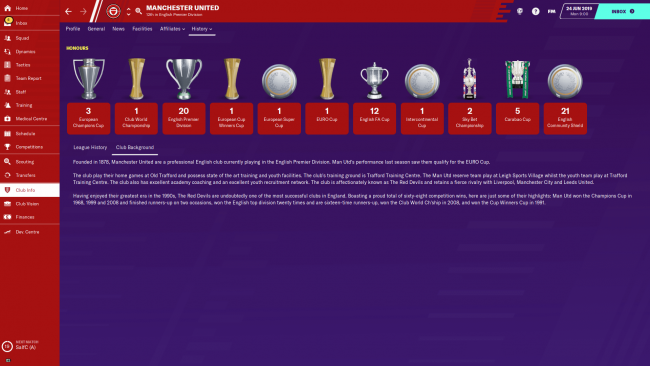 Man United are clearly a special club with an illustrious history and incredibly impressive trophy haul. However by their own high standards, times have been hard since the retirement of the legendary Sir Alex Ferguson in 2013.

First to follow him in the hot seat was David Moyes. His tactics proved too predictable though and fans wanted more than hopeful diagonals to the ball magnet that seems to be planted in Marouanne Fellaini’s chest. He had the Glaswegian accent and the no-nonsense demeanor of Ferguson but always seemed a poor tribute act. A Shakin’ Stevens to replace Elvis, he still left the building.

Next up was Louis Van Gaal, the Dutchman had just led his national team to the 2014 World Cup semi final and had an impressive CV. Alongside him as assistant manager was club legend Ryan Giggs returning home to ‘keep it in the family’. The duo ultimately proved a disappointment also.

Then Jose Mourinho had his customary strong start before his equally customary demise at the hands of his own ego. The Katie Hopkins of Football™ bagged a Europa League and League Cup in his 2 full seasons before being sacked in late 2018. Just before Christmas, presumably so he couldn’t ruin that as well.

Enter James Harries Ole Gunnar Solskjaer who immediately took full control of the wheel and enjoyed an incredible beginning to life at Old Trafford. His finest moment undoubtedly coming with a dramatic victory over PSG in the Champions League. And then... it all went wrong. A run of just 2 wins in the final 12 games of the 18/19 season shows much work needs to be done to return them to the very top. 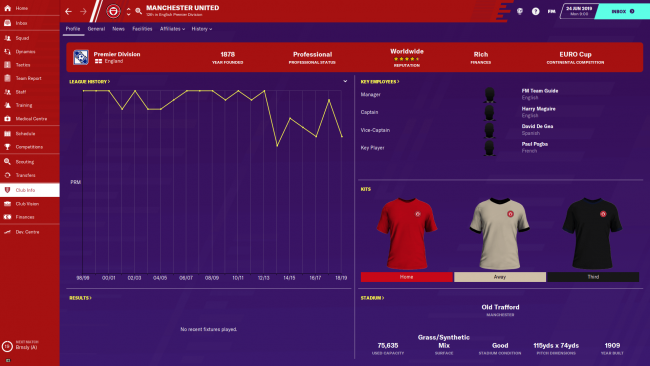 The post-Ferguson decline is clear to see in Premier League finishes.

Despite the Glazers taking money out of the club to pay off the debt that they used to ‘buy’ the club (think I got that right, football is strange) there’s still a substantial amount of money to play with. In fact, you’re filthy rich. The future seasons projections are extremely positive too. This is important in terms of recruitment as it will allow you to stretch the budget to the limit. You can pay in installments and other ‘pay later’ clauses and bonuses safe in the knowledge that the money won’t be drying up anytime soon. 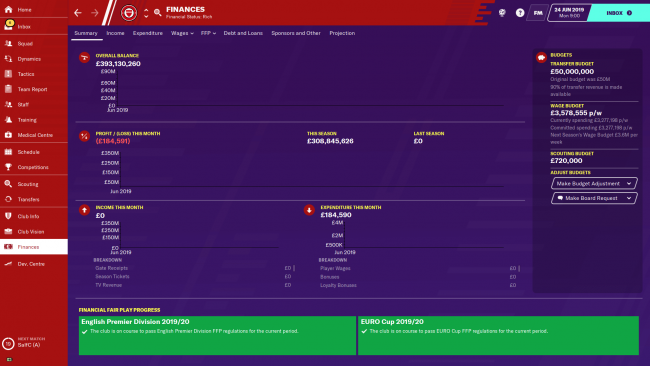 There’s a tractor sponsorship deal already in place too, so you don’t have to worry there either.

GOALKEEPER
De Gea remains a top-class goalkeeper and Romero is an experienced and able back up. Nothing much to do here.

RIGHT BACK
Newly recruited Wan-Bissaka significantly strengthens defence and is one of the best tacklers in the game. Dalot offers potential. All good here too. This is easy, so far...

CENTRE BACK
Half man / half head Harry Maguire is a great new addition but slow on the turn. A top-quality partner for him with a little pace to protect against counter attacks would be ideal. Lindelof is good but not great and preferably not one for the best 11. Tuanzebe is one of many players at the club with a bright future. Bailly has a long-term injury but has never convinced anyway. Phil Jones was never gurner be the next Duncan Edwards as Ferguson once claimed, so bid him farewell. He ruins the calendars anyway.

LEFT BACK
Luke Shaw’s diet has resulted in a natural fitness of 8 so cut on the catering costs and wave him goodbye, West Ham always need players. Brandon Williams looks like a future star but is still very young, he’s certainly ready to be 2nd choice but a new main man is required.

RIGHT MIDFIELD
The much-maligned Jesse Lingard is actually a useful and versatile squad player, but not good enough to start. Time to go shopping for a new starter here too.

CENTRAL MIDFIELD
Don’t believe everything Graeme Souness says. Paul Pogba is a great playmaker and matchwinner in one, he does need the right players alongside him though. Mctominay is a good squad player with further improvement to come. Mata has been a classy player for years but is clearly in decline. Andreas Pereira looks to lack game-intelligence. Fred is Fred and Matic moves like Micky Quinn in slow motion. Luckily you have Bruno Fernandes whose profile and rounded attributes should be the blueprint for future signings to come. He can play deeper or as a number 10. New recruits are still badly needed though. A box to box midfielder would add balance and aid in counter attacks. A more creative addition would help in unlocking tight defences from open play, a major weakness in the current squad.

LEFT MIDFIELD
New signing Dan James has talent but is not ready to be relied upon. Martial can be frustratingly inconsistent but has talent. He can also play as a striker but can struggle and become isolated if playing as a lone frontman. You could sacrifice him to raise funds if you want to go on a real spending spree as you may be overloaded in this position, depending on your use of Rashford.

STRIKER
Mason Greenwood is a great prospect and a very useful sub when chasing a game. Former Watford man Ighalo may be a current Man Utd level player but that’s not the level you should be aspiring to, his loan shouldn’t be extended. Rashford is the current main man but is possibly best suited to a role out wide on the left. An out and out elite level striker at his peak is lacking. 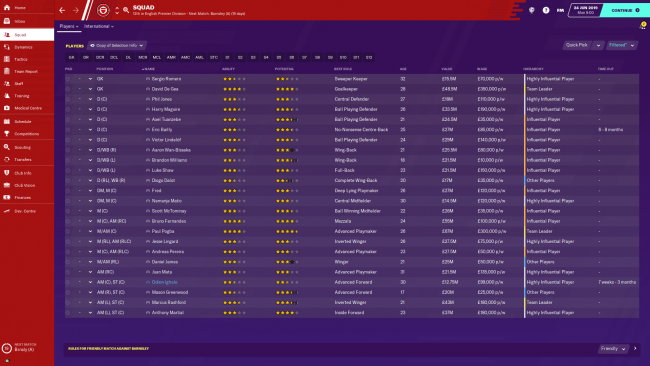 The current first team squad minus those on loan.

Both Rojo and Smalling lack the mental attributes of top centre backs, particularly in terms of concentration. They will also be 30 when they return, let them go. Dean Henderson will return for your 2nd season to challenge Dea Gea for the number 1 spot. The decline of Alexis Sanchez is shown clearly in his physical attributes, sell him when he returns and just get whatever you can for him as he’s on £20m a year until 2022. What. An. Agent.

The likes of James Garner, Ethan Laird and Angel Gomes are just some of those with potential and their development should be monitored. Hannibal Mejbri from the under 18s looks to have a great future and already has a great name. If you have a problem, if no one else can help, and if you can find him, maybe you can... give him some game time in the Cups.

Particular focus should be on the development of these youngsters and they should be given opportunities if possible, but generally not in the Premier League as Champions League qualification is a must. Their progress will also allow future budgets to be spent on the elite level players needed to compete with the very best. Arguably more importantly, the progression of young players into the first team is a huge part of the club’s identity. From the Busby Babes to the Class of ‘92, it’s in their DNA.

I hope you’ve enjoyed reading this.

Please follow me @FMTeamGuide for more team guides, features and other articles.