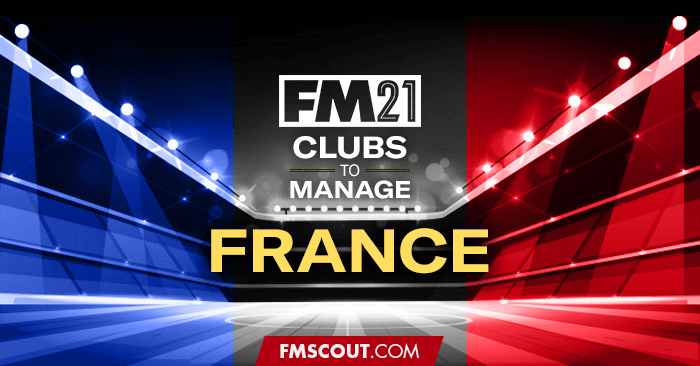 The article is divided by league's; Ligue 1, Ligue 2, Championnat National

Let's start off with Ligue 1 where Paris Saint-Germain continued their dominance by winning the title;

So close to their ultimate goal of winning the Champions League - PSG nearly went all the way only to lose 1-0 to Bayern Munich. Now they must go at it for another season to be crowned champions of Europe. Marseille still hold the proud record of being the only French club to win the Champions League, though PSG over the next few seasons do have a chance of toppling that record - it's up to you to guide them.

Finishing second and back in the Champions League for the first time since 2013/2014 where they were knocked out in the group stage, Marseille seem to be back near the top of the table and doing so consistently. An extremely disappointing Europa League campaign helped them to focus on the league before COVID shut down the 2019/2020 season. Marseille are still one of the most decorated and best clubs historically in France despite PSG’s recent success, plus they’re the only French side to have won the Champions League – something PSG are still in search for after their final’s loss to Bayern Munich.

Renowned for its impressive youth academy, Stade Rennais are not known to compete at the top end of Ligue 1 as their best ever finish was last season where they finished third and are now qualifying for the Champions League for the first time in their history. This impressive combination may not last though as other clubs circle around their players for potential transfers. However, trying to maintain and build Stade Rennais into a proper French and European powerhouse is something which could be on the cards – especially since silverware has come recently with a Coupe de France win in the 2018/2019 season (their third only).

It is hard to remember but Lille did do a domestic double by winning Ligue 1 and the Coupe de France during the 2010/2011 season which involved a squad with players like; Mathieu Debuchy, Idrissa Gueye, Yohan Cabaye, Moussa Sow, Gervinho and Eden Hazard. After coming 17th during the 2017/2018 season Lille have been back competing near the top with coming second then fourth last season. Lille could be a club to push PSG off the top spot in France with some wise and consistent investment and going far within Europe.

An impressive run in last year’s UEFA Champions League doesn’t mask what is a poor performance from Lyon where after COVID – they finished seventh which means no Europa League or Champions League football for the upcoming season. A big blow to a club who are trying to compete back at the top end of the table once again. Big names and impressive talents litter the squad who haven’t won Ligue 1 since they won it seven times in a row – their last in 2007/2008.

Another one of France’s “big” clubs who had another poor season by finishing 9th. Monaco have been struggling ever since they finished 2nd in the 2017/2018 season after winning Ligue 1 the season before. Monaco are underperforming especially with several big names and talents coming through the squad. Getting back to competing for Champions League football is a big challenge considering that many excellent clubs are in the way or want to do the same.

Strasbourg is one of six clubs to have won all three major French trophies, one of six teams to have played more than 2,000 games in France’s top flight and has taken part in 52 European games since 1961. However, they have never really been able to establish themselves as one of France’s leading clubs – with on average one relegation per decade. Most recently they found themselves in the Fifth Tier of French football for the 2011/2012 season after going into financial liquidation. Now several consistent seasons have seen Strasbourg stay in the top flight – time for them to establish themselves as one of France’s big clubs?

Despite PSG’s success, Saint-Etienne still hold the record for the most Ligue 1 titles with 10. They also reached the Champions League final in 1976 – losing to Bayern Munich at Hampden Park in Scotland. Not too far after that, Saint Etienne won their last league title in 1981 and have been in decline ever since including several relegations. Recently it seems they are on the slide again as at the suspension of Ligue 1 they found themselves 17th, one spot above the relegation zone where just in the 2018/2019 season they finished fourth. They did however reach the Coupe de France final this year losing to PSG 1-0 – but the signs are worrying for Saint-Etienne who never look to be competitive at the top in France again.

Clermont have never been promoted to Ligue 1 in their history but were in with a shout before COVID ended all seasons prematurely in France – they ended up 5th in Ligue 2. Corinne Diacre became the first woman to coach a men’s professional football team in a competitive match in the top two tiers of European football by managing Clermont Foot. A good youth academy mixed with an open minded board can see Clermont reach the promised land for the first time in their history.

The oldest French Football club and won France’s first ever-championship, they have still yet to win Ligue 1 with their last honor to date was the Coupe de France in 1959. The club is most notable for their youth program which develops and nurtures young talent – bringing them into the first team and selling them on to fellow French clubs or across Europe. The key to getting back into Ligue 1 is to hold onto these talents or wisely invest and who knows – under your care they could gain a Ligue 1 title.

Grenoble were liquidated in July 2011 and relegated to the fifth tier of French Football and for the past two seasons have been playing in Ligue 2 after quickly rising up the tiers through several promotions. A spot back in Ligue 1 looks way off the books though as struggles continue at the club.

Chambly were only founded in 1989 and currently don’t play at their 1,000 capacity stadium because of regulations for playing in Ligue 2. Recently Chambly came into the spotlight after drawing 3-3 with AS Monaco in a Coupe de la Ligue match and defeated Strasbourg 1-0 to reach the semi-finals of the Coupe de France. Mostly in the public they’re known for their club colors, crest and jerseys to be heavily influenced from Italian club Internazionale – at one point nearly having the same badge. That doesn’t take away from what is a growing club who have ambitions to get out of Ligue 2.

Literally a one trick pony; Chamois have only ever played in the top flight once in their history 1987/1988. After that they have remained in the lower divisions; where the lost their professional status as recently as 2008. They nearly dropped to the third tier if it wasn’t for the fact COVID stopped the league with Chamois coming 18th out of 20 and not allowing a relegation playoff.

Based on the island of Corsica – Bastia are one of France’s more famous clubs… with crazy fans. Recent years have seen the club however go through difficult times where due to financial difficulties in 2017 they were demoted from Ligue 1 to the 4th tier of French football. Now in the 3rd tier Bastia have a slow climb back to Ligue 1. Bastia reached the Europa League final back in 1977/1978, losing to PSV in the final as their biggest European achievement – and no Ligue 1 titles to their name.

The second oldest French football club, after Le Havre and the fifth most successful club in terms of Coupe de France titles with five. Red Star are a widely recognized club thanks to its social culture off the pitch and the fans identification with certain politics, social activism and a hell of a party atmosphere during matches.

Sete are the first club to win the French League and Cup Double. Historically they are one of the most important clubs in French Football but were forced out of professional status due to financial issues in 1960. Just recently promoted out of the fourth tier thanks to a high finish after COVID shut down the French leagues – Sete look to remain in the National and push on to hopefully a brighter future without financial mismanagement which has plagued them.

Le Mans were controversially relegated to the Championnat National last year as COVID stopped French football. They were placed 19th in Ligue 2 last year when the league was suspended – the LFP proposed that Ligue 2 would temporarily be bumped to 22 clubs which meant that they would remain in the division. However, the FFF ruled that they would be relegated instead. In the meantime, Le Mans FC find themselves in the third tier, playing in MMArena which is based in the interior of the famous circuit within the city hoping to get back to where they believe to belong.

The club was founded in 2017 after CA Bastia (not SC Bastia) and Borgo FC merged together. Within the division they share a rivalry with SC Bastia who are also on the island of Corsica. They gained promotion to the third tier in 2018/2019 season and just survived relegation as COVID shut down the Championnat National. Still a brand new club, they are ripe for taking over and forging a path up the tiers to the top.