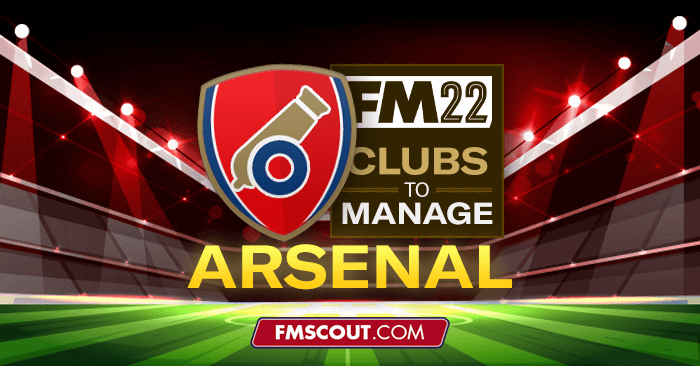 Taking a look at each of the 20 Premier League Clubs and why a save with them in FM22 could be fun and what challenges you may face or like to set yourself.

A bit about Arsenal


Formed in 1886 originally as Dial Square – turning into Royal Arsenal soon after. Changed name to Woolwich Arsenal whilst in Woolwich become just Arsenal in 1913 after moving stadium.


Obviously Arsenal have more history than just the premier league however arguably their most successful spell has been during the Premier League era. Especially during the reign of Arsene Wenger which included 3 Premier League Win and most iconically 'The Invincibles' season.


The glory days seem to be slipping away with the club finishing 8th outside the European places in consecutive seasons – before this Arsenal had fallen down to Europa League qualification for two seasons after qualifying for the Champion's League for 19 successive seasons which represents a sharp dip.

Understandably the passionate fans of Arsenal are not happy with the sharp fall – understandably frustrated with management, the players and the board in equal measure.


So What is happening then?


A mixture of behind the scenes poor decision making at both board and recruitment level is causing negativity with the fans as well as the poor performances and results the team are getting. It is hard to pinpoint one specific area as it is a multitude of all these things.

Arsenal were the highest spenders in the transfer window but lost their first 3 games of the season without scoring a goal or really looking like they were really competing.

Pressure began to mount on Mikel Arteta despite not being helped with a breakout of Covid within the squad at the season start as well as perhaps two of the toughest teams to play in the first three games.

Two 1-0 wins against Norwich and Burnley has taken Arsenal off the bottom of the league and removed some pressure though the performances have not been massively better and if VAR hadn't intervened in the Burnley game that could have been a further disappointment with a drawn game.

An amazing victory against North London rivals Tottenham have boosted them up to 10th though question marks remain especially after a 0-0 draw with Brighton where they were not at the races and were fortunate to leave with a point.


A Look at the team


Arsenal have a relatively young squad with an average age of 25.

They have two experienced forwards and whilst last season and the start of the current hasn't been the best for him Aubameyang remains as one of the most lethal forwards in the league and if he can return to his best can easily reach 20+ goals and boost Arsenal both in real life and in the game.

Potential – if there is something Arsenal are hoping for it's that the squad will come good with the potential and understandably there are several rated talents though so they are hoping for fortunes to turn with these prospects:

Ben white has cost the Gunners £50m or there about after two impressive seasons with Leeds Utd and Brighton respectively, they are hoping his trajectory keeps going and he becomes a mainstay of their defence for years to come, they will be hoping to bed him in with Gabriel, signed last season.

Saka and Smith Rowe have come through from the academy and have both proven in the last season they are vitally important to the cause having been given lower squad numbers for the current campaign.

Arsenal will again look to Martin Odegaard to recapture his great form from the second half of last season where he was on loan – turning the move permanent was high on the to do list and now he is there they will need his capable creative spark.

There likely is a difference of opinion with the fans about each of these but the squad contains several players whom either are not cut out for the level Arsenal are aiming for, have let the club down or perhaps just not a fit for Arsenal.

I'm not a fan but I think Xhaka is a hothead and has had too many chances, the defence overall does not have enough strength and has let them down far too often for the last few seasons.

Pepe is a talent but something just hasn't clicked too often when he has had a chance, it does look like Arsenal are working better with transfers but there is still work to be done.


So Why Manage Arsenal in FM22?


So that's why I think Arsenal would be a good save in FM22, perhaps you've given them a try with the update in 21 or you are planning to do this in 22, maybe you've been convinced?

Let me know how you get on with the Gunners in your FM Save!