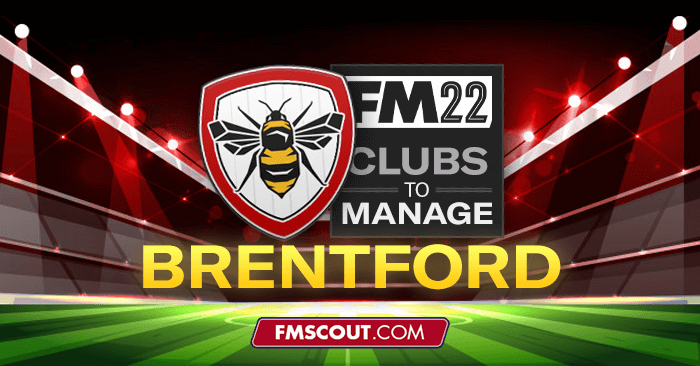 A bit about Brentford

Nicknamed 'The Bees'
Played at former ground Griffin Park since 1904 until moving to the new 'Brentford Community Stadium' in 2020 with a new capacity of 17,250
Formed in 1889 turning professional in 1899.
Most Frequent opponents at Brentford – Bournemouth.

Newcomers to the Premier League

After sealing promotion via the Play-offs in the 20/21 Season Brentford become the 50th different team to feature in the Premier League since its inception in 1992/93.

They have not experienced top flight football since 1947 some 74 years ago.

Head coach Thomas Frank took charge after former manager Dean Smith left for Aston Villa – he has continued their positive momentum whilst tweaking to his own way and his infectious personality makes him an undisputed fan favourite in his few years at the helm.

Brentford for some time have had a sensible and clear plan with their transfer dealings for the squad. They like playing positive football and aim to buy young talented players for lower fees and are happy to develop them – if they stay - great for Brentford – but if clubs come in for them they will sell for a premium.

They have done with with greater success each passing season.

Maupay left for Brighton for £16million* after developing with Brentford who signed him for £1.8million*
Similarly Said Benrahma was bought for £1.53million and sold for £20million plus add ons.
Ollie Watkins was sold to Aston Villa for over £30million* after costing Brentord about £6.5million*

They could potentially do this again if needed with Ivan Toney and Mbeumo – both of them with their starts this season surely would have them rated between 20-30million at least.

As mentioned Brentford have a strategy and though many clubs do Brentford execute this successfully, unearthing excellent talent who get the job done and work hard to get the results on the pitch.

This season remains no different adding Ajer, Wissa and Onyeka to their ranks as their main signings.

All 3 of these signings are 25 or under though boast decent experience in their careers. All three fit the profile and have all settled in very well boosting the team and being key to their early good form in the new Premier League season.

They are deservedly 9th after 8 games with 12 points, the best out of the promoted clubs in the current campaign, they may have been higher if they'd have taken one of their many chances against Chelsea.

A key component to any successful campaign is keeping the goals out or at least limiting the opponent's conversions. So far Brentford are performing well in this area with 3 clean sheets in 8 games a strong start for a newly promoted side only conceding 7 times so far.

David Raya is the man between the sticks and is well trusted as the last line of the defence, strong reflexes and only being 26 means he still has many years ahead to improve even further. Impressively has the most passes currently within the whole Brentford squad (346).

Pontus Jansson is the elder statesman of the squad and brings a wealth of experience finally getting his chance at the big time.

Sergi Canos is a skillful winger/wing back who had an appearance in the premier league previously with Liverpool, he is ranked joint 12th for tackles in the league with (21)* so far.

New signing Kristoffer Ajer offers further protection and has settled into the club and division nicely immediately becoming a first team regularly and providing extra quality with his play from the back.

And whilst it is so important especially within the top flight to concede as few as possible – this strength is less important if you cannot score either. A key feature though of Brentford and Frank's style is to be bold in doing so – attacking with pace and power and being incisive when in the final third.

Mbuemo and Toney have a very good understanding which contributed to Toney scoring 32 goals and 10 assists last term whereas Mbeumo notched 8 goals and 10 assists.
Yoane Wissa has been added and already has 5 goals in 6 games in all competitions for the bees making for an impressive front 3, scoring 6 of Brentford's 10 goals in the league.

So Why Manage Brentford in FM22?

Forget form as this doesn't always translate in Football Manager anyway – can you just keep them up? Always a challenge in FM just to keep newly promoted sides in the division, can you beat the drop and then take Brentford to the next level? They play good football so can you do the same and survive or are you more pragmatic – take a draw here and there and make the most of set plays?

Brentford have an efficient Strategy and have applied it well to their debut Premier League season, might you be able to effectively work within this strategy and look for gems to shape up swiftly maintaining the attacking football and selling for high profits as needed? Or can you break the mould and keep the better players at the club?

As they have started well in the league in real life can you replicate the impressive form they have shown?

Can you do so with the same formation? 3 or 5 at the back whilst more used in real life this has been tricky to work consistently in FM21 so can you get it to work to the same degree as Brentford have in FM22 perhaps with the new wide centre backs you can.

If you can do one or all of these things you'll do well with Brentford and surely enjoy a save with them, hopefully take them to some silverware, their current cabinet is not especially large so you could be an instant icon if you can bring home any trophy.