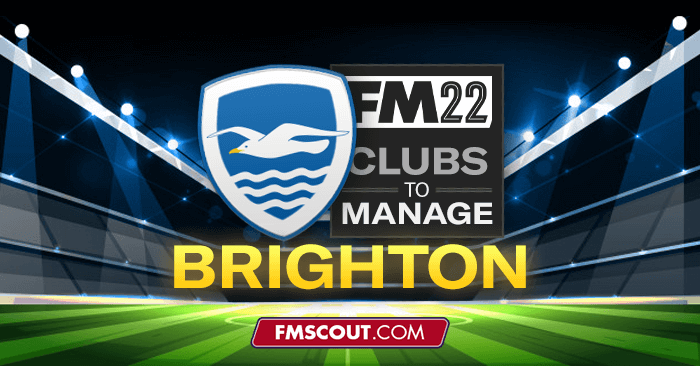 A bit about Brighton

Brighton were formed in 1897 playing at the Sussex cricket ground though collapsed 3 years later.

They reformed as Brighton & Hove Rangers but only lasted 1 year before again collapsing.

A third attempt proved successful in 1901 which leads us to the Brighton & Hove Albion which exists today.

A lengthy process taking 10 years saw Brighton get permission for current ground 'The Amex' the community stadium which they moved into in 2011. Current capacity of just over 30,000.

Brighton were promoted to the Premier league after several seasons getting close with the play-offs, finally crossing the line being promoted in the 2016/17 season where they have remained since.

In their first season in the Premier Brighton finished a respectable 15th place reaching the magic 40 point mark and surviving the first season. The second season was much less certain and though they did survive it was a close thing, only 36 points in that season just 2 points ahead of Cardiff, this saw then manager Chris Hughton relieved of duty.

This saw the arrival of current manager Graham Potter whom had been in charge of Swansea, he was brought in to implement a more positive style of play to the club.

Whilst he has done so the positions arguably have been less impressive than the actually performances on the pitch though they have maintained survival in the league.

So under Graham Potter Brighton have gone back to more attacking football which was a feature of their game when they were promoted initially to the championship and whilst they were playing there to be promoted to the Premier Leagee.

Hughton was a pragmatic coach however and whilst in charge worked on staying up only rather than focusing on the playing style.

Under Potter this has changed and we can see in comparison to Hughton's last season in charge (18/19) with them there were two steady seasons of similar improvements.

Most noticeable are the number of shots Brighton were getting off approximately 100 more each of the last two full seasons as well as improving their passing game drastically with more passes per game equalling 4000+ more passes over the season and a largely improved accuracy when doing so.

We can also see the big chances created has improved with over 10 more per season than with Hughton, in can be said that their league positions did not necessarily reflect their ability with the ball, the biggest issue has been chance conversion.

This season currently the stats are improving further with an even higher passing rate in the first 8 games of 83%, but their shooting accuracy is also improving and the number of shots - whilst the goals per match isn't quite as high as last season at the moment it certainly looks like this could also be their best season on this front with a tad more ruthlessness.

Brighton have been working with a core of players for the last few season, of course there are ins and outs but there are a few key players making the core of the team.

Neal Maupay is now the main scoring threat after Brighton shelled out for him in the 19/20 season. Now in his 3rd season the goals are flowing better, and this seems to finally be clicking – Brighton will hope the vein of form he is in continues.

Trossard is a skilful inverted winger/inside forward whom has partnered Maupay up front this season in a slight tweak to his normal left sided role though it is paying dividends and he also has shown an impressive start to this season.

Lewis Dunk is the mainstay of the team whom has been at the club his entire career, except for a brief loan spell at Bristol City, the captain is the heart of defence and his consistency has seen him flirting with the England squad several times.

After staying up and improving the style of play – Brighton are seeing a good select of younger players making the grade and developing at the club, whilst not considered a selling club it may be that the prospects they have could make the leap to a bigger side.

Cucurella has come in from Barcelona and immediately has made the left back position his own taking over from Dan Burn whom did his best but this is possibly Brighton's best acquisition in the Premier League.

Jakub Moder is a very hardworking midfielder and has featured in all of their league games this season, his willingness to work hard for the team in and out of possession will surely pay dividends for him and Brighton this campaign.

Alexis Mac Allister, a nimble attacking midfielder with impressive passing range, he is still young but features often for the Seagulls registering 1 goal and assist this season so far.

So Why Manage Brighton in FM22?

Brighton are an interesting challenge as I feel in FM21 they were not fairly regarded as a passing team and their players were not perhaps fairly given stats. This is my opinion, whilst looking at them perhaps some are not built for this style but they play it and do it well.

Those interested in recreations would do far worse than to try and replicate Potter's style of play easy on the eyes it would certainly make any highlights for your side pleasant viewing.

Their league positions possibly hindering their stats in game. I have tried several times to implement a short passing game tactic with them only to see it fail.

Also achieving a higher placed finish than 15th – their current highest finish in the league a realistic aim would be to gain a few more positions perhaps top half as well as trying like several other teams will have mentioned in this series, but Brighton do not have many trophies in the bank – very capable I think for a cup run this season but can you add one to the cabinet something currently lacking for the south coast side.

Regardless of style can you develop the younger prospects further either turn them into superstars for the Seagulls or into better footballers to make profit – Brighton I would not say were a selling club so to speak but there are numerous younger players who possibly could make the club some good money on the game – Moder, Mac Allister, Cucurella already mentioned however also at the club on loan elsewhere or fringes of club are Aaron Connolly, Andi Zeqiri, Moises Caicedo, Tariq Lamptey just to add a few more – these players have the stats to suggest they could be stars but can you harness this talent pool to its full potential and reap the rewards.

Can you get the Seagulls to soar higher than they ever have, do think about them for FM22 and let me know how it goes.