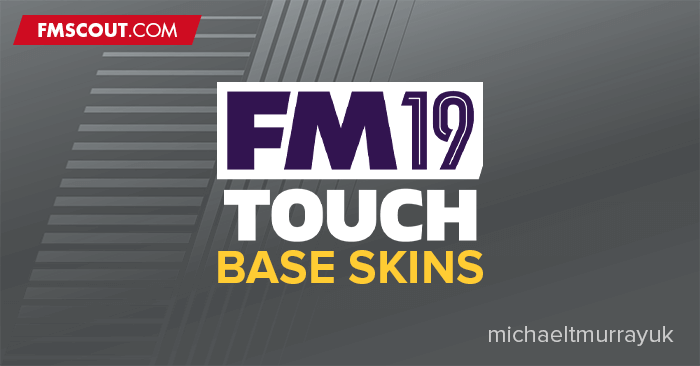 So to make things easier for people, this pack contains base skins that are identical to the default skins that come with the game, so you can add new files/graphics to these without messing up the original skins, and anything that isn't located in these new skin folders will be taken from the default locations within the game.

Also the download includes each of the four Touch Mode Base Skins you just need to select the one you want to use after you have downloaded the file and install that one.

For Football Manager 2019 Touch you have four skins to choose from a Dark one and a Retro one pluse Touchscreen versions for both of them.

Base Touch - Dark - (basetouch_dark folder) This is the Dark Base Skin for the FMT (Touch) Mode and is identical in appearance to the Football Manager Touch - Dark Skin.

Base Touch - Retro - (basetouch_retro folder) This is the Retro Base Skin for the FMT (Touch) Mode and is identical in appearance to the Football Manager Touch - Retro Skin.

When you extract the file you have downloaded you should have four folders (with a name starting basetouch...) and a readme.txt file.

First pick which version of the Touch Base Skin you wish to use and then copy the folder into your skins folder within your User Data Location, by default this is:

If done right your skins folder should look something like this:

And inside for example the basetouch_retro folder you should have the following folders:

When you load the game up if the skin cache is off any skins in the skins folder should appear in the skins menu like the below image:

If the skin cache is on you'll need to turn it off, exit the Preferences menu and re-enter it and any new skins should appear, if not tick 'Always Reload Skin on Confirm' and change skins, click confirm and go back in and your skin should appear.

How To Stop the Blurring Effect when Processing

FM2016 introduced a new feature where when the main screen isn't the focus of the screen it blurs out, however if you don't like this effect it is simple enough to disable it, to do this simply browse to the following location within the Base Skin you are using:

Inside will be a paper.xml file open that and locate this line:

and change it to read:

Then reload the skin and the background content should now be clearer.

Base skins are prepared and edited by Michael Murray who also provided all the skin editing information on this very page. He is a moderator at the official forums of Sports Interactive and has been sharing his skinning knowledge on Football Manager since late 2006.