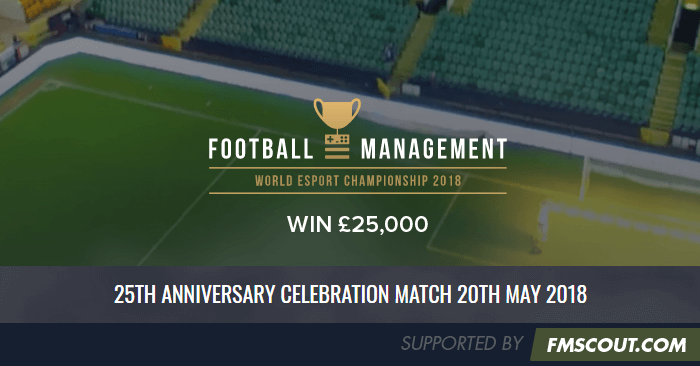 Do you remember Copa Manageria? I'm pretty sure many of you would love the opportunity to take part in such a competition. Copa Manageria was an international 16-man tournament which took place earlier this season (November 2017) in London on Sports Interactive headquarters.

Now Bidstack is looking to unearth the world's best virtual manager and give them the opportunity to experience real life football management. The Football Manager gamers will compete at Insomnia Gaming Festival 2018 at the NEC Arena in Birmingham on March 31st for a £25,000 prize plus a very unique opportunity.

Thanks to the good people at Norwich City Football Club and the superb Community Sports Foundation, the winner of this game changing eSport tournament will be up and close with the stars, tactics and behind the scenes action in the upcoming Norwich City Legends vs. Inter Forever charity match on May 20th, at Carrow Road.

Celebrating Norwich’s 25th anniversary of their historic European Cup Run, where the Norfolk side famously dispatched German giants Bayern Munich before being toppled themselves by eventual winners Inter Milan, the match will see the return of legends from both Clubs.

World Cup winning Marco Materazzi, goalkeeping legends Francesco Toldo and Bryan Gunn, as well as one of the great right backs of all time - Javier Zanetti, are just some of the names already confirmed.

Further details of the match taking place on May 20th, can be found here.

A first of its kind eSports competition with a once in a life time prize.


“We’ve created this tournament to unearth the best manager in the virtual world - and then bring that person into the real world of football management. We wanted to create a new Esports Tournament to prove to the market Esports skills are transferable.”


64 entrants will be randomly selected for the chance to battle it out and showcase their skills from within the technical box. The bring-your-own-computer 64-man knockout tournament will run on a specially designed Draft version of the game, in which players will be able to hand pick their teams using the full extent of their Football Manager knowledge and their knowledge of the footballing world.

You have until February 26th to enter the tournament, and it will only take a minute to fill out your details. Don't miss this opportunity!

The tournament is free and includes free entry into the event for the 64 contestants.