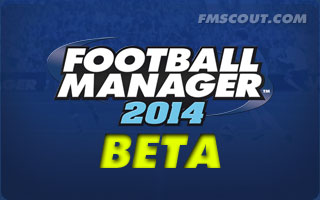 For those of you who have pre-ordered through our store we are delighted to let you know that the beta version of Football Manager 2014 is now available to download via Steam!
For more information about the beta, see this page: FM14 Beta Explained

You can still pre-order FM14 at our official store at any time between now and October 31st and get access to the beta version.

Important: You are actually buying the full game which will be released on 31 October, but you get to play the beta now as a free bonus for your pre-purchase. The beta is not a demo, it's a full game (not final but full).

What is this beta version?
The beta version is a full version of the game without limitations. It has small known issues that will be fixed when final version is released on October 31st.
The career mode and Classic mode including Challenge mode will all be playable in the beta.

Is this the Demo?
No, it's NOT the demo. It's a pre-release version of the game and you can play as much as you like, there is no season limit or anything. The demo will be released 1 week before the final game release, so around 24 October.


Talk me through the process how to download the beta.
You buy your activation code from our store and you will receive two emails containing codes for the beta and for the final version, along with instructions how to redeem them on Steam.
Here are steps:

Is the editor included in the beta?
No, the editor will be available when the final game is released at 00.01 GMT on Thursday 31st October.