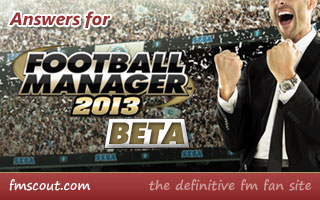 Many people seem to have questions about the beta version of FM13. So here are the answers to these questions.

Why pre-purchase FM13?
Anyone who pre-purchases Football Manager 2013 through our store will be given a beta key which will allow early access to the game. The early access period will be 2 weeks – so you can start playing the game two weeks before its actual release.

What is this beta version?
The beta version is an early version of the game normally produced a few weeks before the game itself is mastered. Sports Interactive will continue to work on the game until a couple of days before it is released.


What do I get when I pre-purchase?
Your activation code will be sent to you electronically via e mail and you will be able to redeem it on Steam. We only deal with the digital edition, so we don't ship any DVDs.

What time, exactly, is the beta going to be released?
Sports Interactive have set no time or date that the beta will go live apart from "approximately 2 weeks before release". However we believe the beta access will begin on Friday 19 October.

How long does the beta code take to install?
This will very much depend on your internet connection speed. For example with an average speed of 2 MB per second it should take 20 minutes. Please note however this is only a guide and it will vary.

What happens when the game is released if I have pre-purchased from your store?
Your game will automatically update from BETA to final version on the launch day, given that your Steam client is in online mode.

What happens to my beta game post release?
Your beta game will remain as a saved game in your computer and you can continue it on the final version.

Can I play all game modes in the beta?
The career mode, and new Classic mode including Challenge mode will all be playable in the beta. However it is not the full and final version, so some elements will not be activated until you install the final version.

How long will I have to wait for the full game to download, following my beta install?
As with the beta install, this will depend on the speed of you internet connection so times will vary. We estimate an average install time from beta to complete game would be approximately 20 minutes.

If serious issues are found in the beta version, will they be fixed in time for the games release?
That is the plan, although both Sports Interactive and SEGA are hopeful that there won't be any!

Is the editor going to be released at the same time as the beta?
No – the editor will be available when the game itself is released at 00.01 GMT on Friday 2nd November.