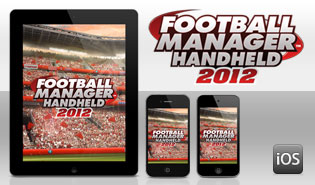 Football Manager Handheld 2012 has passed through Apple's submission process, and will be released in your local region (excluding Germany, Brazil & Chinese Taipei) around midnight tonight, depending on the server propagation for iPod Touch, iPhone & iPad (with iOS 3.0 or above), all in one package so if you have multiple devices, you can play the game on all of them.

The Welsh League and Conference North & South are playable for the first time.

Improved user interface, with a graphical emphasis on newspaper items, sorting on the shortlist page, a transfer window rules page, visibility of future transfers and lots of tweaks to make this the easiest to use version of Football Manager Handheld to date.

A couple of fan requested features – the addition of Facebook to the social networking options and “star players” which identifies the 3 star players in the squad.

The ability to load & save shortlists and search filters, so you can share them with your friends.

Dozens of other little features that will make your management experience easier and more fun, ranging from more media interaction, through to being able to automate sending players from your reserve team on loan.

A brand new addition to the Football Manager series of games.
Challenge mode.

Challenge mode is a new game mode for playing Football Manager Handheld that allows budding managers to take on some pre-defined scenarios to see how good a manager they really are. You select the challenge, select your team (and with all of the challenges bar one they can be played with any team in the game) and see if you can complete it – similar to the challenges that were in International Superstar Soccer all those years ago.

As well as the main management game mode, and the free car/station/stadium finder that helps you get to and from football stadiums, you now have another game mode.

The 4 challenges that come with the game are:

"The Saviour Cometh" – Your team are in a relegation battle half way through the season. Can you guide them to safety? [playable with any club in a league that has relegation]

"Injury Crisis" – Your team have an injury crisis leading to most of your first team players getting injured. Can you avoid getting the sack by still putting together a run of results.

"Unrest at home" – Your appointment as manager has left some senior players unhappy. Can you avoid being sacked before the end of the season by still achieving the boards ambitions?

"The Invincibles" – You’ve gone on a long run without losing. Can you keep it up and avoid losing for the rest of the season?

If you’re lucky enough to have Apple TV and iOS 5, you can now mirror Football Manager Handheld 2012 from your iPhone or iPad onto your TV screen, whilst controlling it with the handheld device.