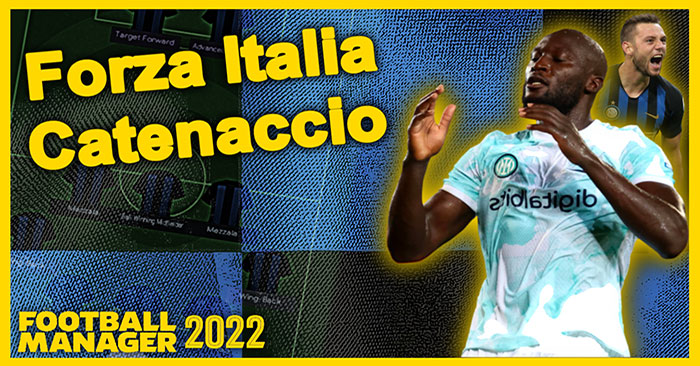 
No sport evokes emotion quite like the beautiful game. From the swashbuckling Brazilian Joga bonito, the free-flowing total football of the Dutch to the art of defence made famous by the Italians.

No other nation took more pride than winning 1-0 than the Italians, Seria A prided itself on its defensive structure no greater example of this was the 93/94 season with Milan winning the scudetto by scoring only 36 goals and conceding only 15. They had mastered winning 1-0 and won nine times that season by the scoreline. Milan had gone from playing an attractive vertical tika taka under Sacchi to the pragmatic and efficient side that made winning ugly an art form.

That great Milan side used the 4-4-2 formation but when I think of classical Italian formations I instantly think of the 3 at the back systems highlighting the libero role. The libero was key in the catenaccio philosophy, which literally translates to door bolt and is associated with negative football and in today's terms you might call it parking the bus.

Catenaccio is misunderstood and in fact contrary to belief it was not a defensive way of playing the game it was all about balancing attack with defence and playing in a way that blunted opponents before hitting them with the perfect counterattack. Catenaccio used a man-marking system with the libero sweeping and sniffing out any danger behind the defensive line.

Catenaccio would later evolve into Zona Mista which translates to mixed zone. Zona Mista took everything good about catenaccio and combined it with total football which catapulted Juventus to the top of the game. Both catenaccio and zona Mista used what can be described as a lopsided 4-4-2 shape with three centre backs including a libero and three central midfielders. The width was provided by the left wingback and on the right, the wingback was pushed into the midfield zone. 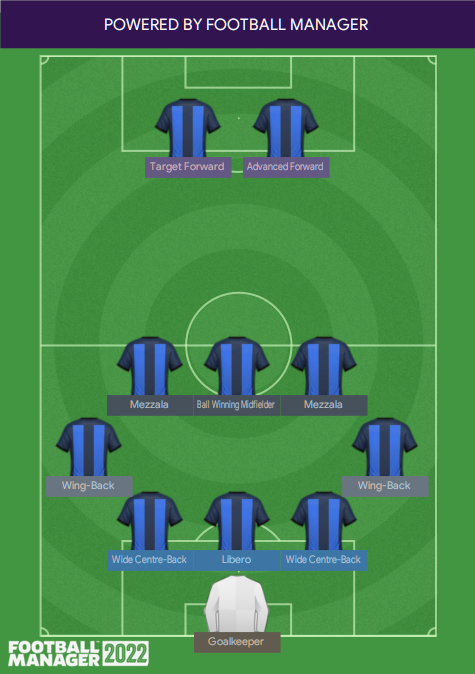 This tactic takes the principles of the classic styles of Catenaccio and Zona Mista combining the dark arts of Italian defence. Rather than playing with an asymmetric 4-4-2 like the systems mentioned above I have used another classic Italian formation the 3-5-2.

Like all tactics and styles, it’s important to build your system around the players available to you or to bring in the right players to fit into the system. This system utilises the libero because it wouldn’t be suitable to use anything else when implementing an Italian style of play.

Starting from the back

The goalkeeper is your classic goalkeeper no need for them to have fancy feet they are here to be a shot stopper and command their area, collecting crosses before kicking the ball to the target forward.

The back three consist of a pair of wide centre-backs flanking the libero. First and foremost our defenders need to be able to read the game well to stifle opponents' attacks and be physical and dominant in the air heading balls back out of the box. The libero is the last line of defence and is tasked with dropping deep to sweep up loose balls and prevent strikers from having a clean run to the goal.

With the ball, the libero brings the ball out of defence and links defence and midfield. They should have good passing and vision to allow them to switch the ball to the wingbacks or go long to the target forward. The wide centre-backs support the wingbacks by creating a passing triangle with the outside midfielders allowing the ball to be moved risk-free.

The most important positions in the system. They are required to provide the width bombing up and down the flanks whipping in crosses. The wingbacks also pull defenders into the wide areas creating space in the half-space for the mezzalas to exploit.

The wingbacks are not just crucial for the attacking phase they have a big responsibility to defend when the opposition is on the ball. They need to have great stamina, concentration and awareness to ensure the team's lines are compact and no gaps for the opposition to exploit.

The midfield three is the engine room of the tactic. The middle of the three is the ball winner and sits in front of the back three offering protection and giving the wingbacks the freedom to bomb forward. Just because I have used the ball-winning midfield role doesn’t mean they can’t create from deep, I used Brozovic in this position and he was able to ping balls out wide to the wingbacks.

The mezzalas are the runners who will get forward and overload the half spaces creating almost a front six in attack. They can also play off the target forward collecting the knockdowns before driving into the final third committing defenders before playing the killer ball.

This combination can make or break the tactic, the brute is the target forward. They are going to be the battering ram bullying defenders, holding up the ball winning knockdowns before getting into the box and onto the end of crosses.

The partner is the advanced forward they will play on the shoulder of the defenders. This combination aims to stretch the opponents' defence with the target forward dropping deeper to contest the ball, whilst the smaller and quicker forward looks to run in behind on to flick-ons and through balls.

In possession, the team is going to play more direct aiming to go from back to front using the focal point of the target forward. The target forward possesses the strength and composure to hold up the ball allowing the wingbacks and midfield runners to join attacks.

Here you can see Brozovic has time and space to switch the ball to one of the fullbacks. If a team looks to press then he can play a safer pass to a midfielder dropping deeper or to one of the centre-backs. The right wing-back receives the ball before whipping in the cross for the attacking players flooding into the six-yard area resulting in an easy tap-in. 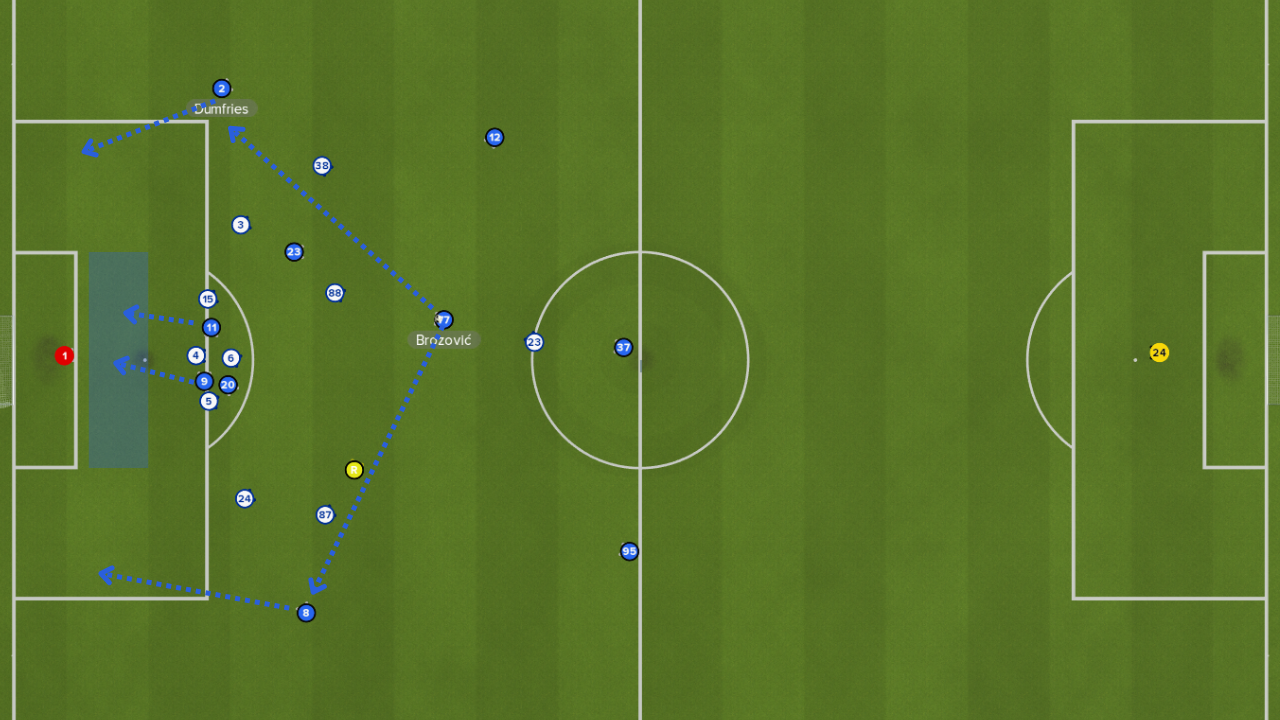 Wingbacks and mezzalas combine in the half spaces and wide areas creating overloads for through balls in the channel or for time on the ball to whip in dangerous crosses.

This time the target forward has dropped deeper to link up with play, he is now looking to rejoin the attack. Barella has got the ball between the lines and now is able to drive at the defence looking for a defender to commit themselves, which would allow the through ball to be played. There is so much space in the half spaces that the ball can be played through these areas to on rushing wingbacks and the left mezzala. 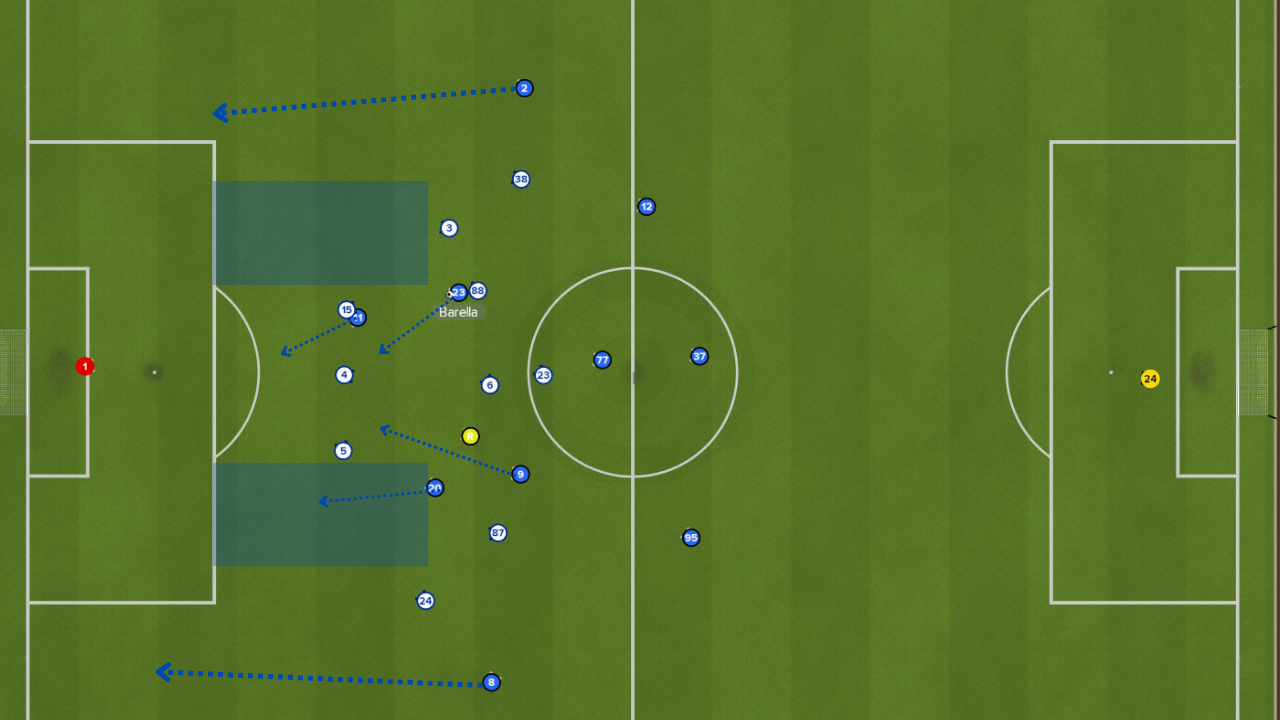 The teams ultimate aim is to be ruthless and efficient in attack not worrying about possession but being direct and executing rapid and clinical counterattacks to knock the stuffing out of the opposition.

The aim is to regroup and make it difficult for teams to play through the compact lines. The team will shuffle in unison from one side to the other depending on where the ball is. The objective is to control space shepherding teams away from danger only pressing to win the ball when teams make a mistake.

Here you can see the defence resembles a back five out of possession and that almost everybody is back behind the ball. Damsgaard is not under immediate pressure but his options are limited to passing backwards. Allowing the team to reset their positions looking for the chance to win the ball back and counter quickly. 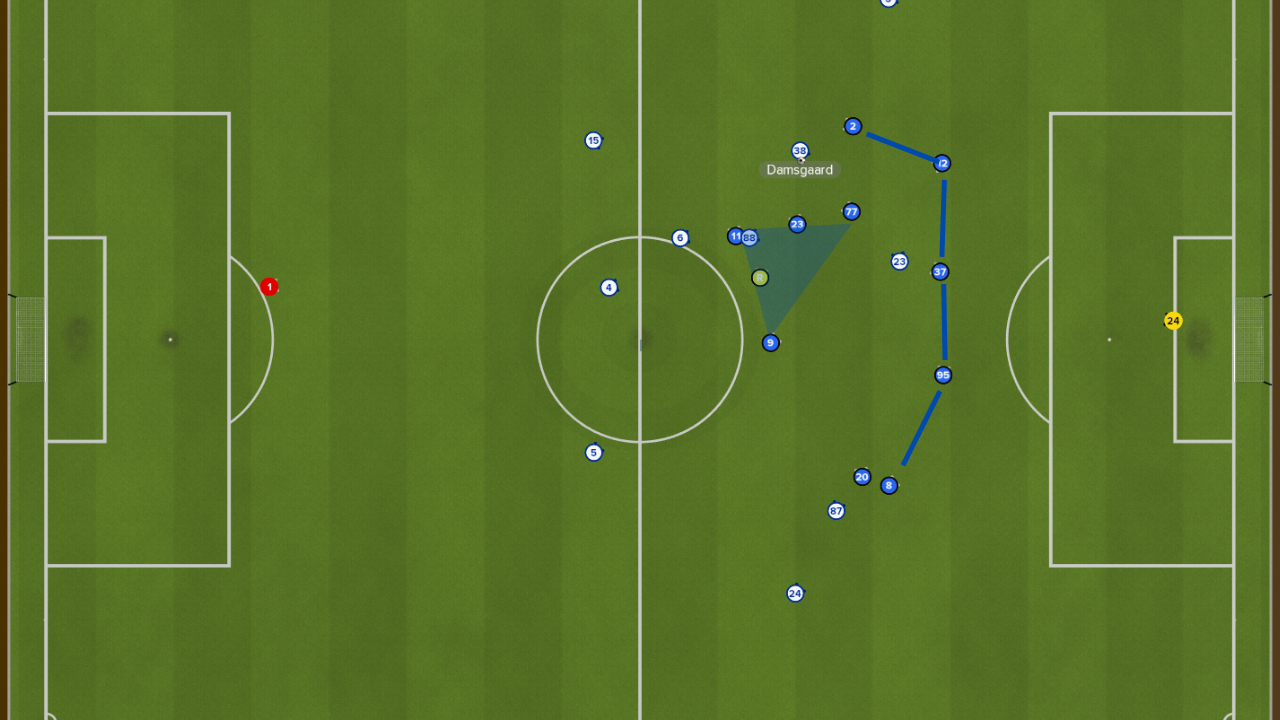 Once again you can see how the team is holding a deep and compact shape leaving the ball carrier little to no choice but to play the ball backwards. This forces teams to commit more players forward in order to try and break down the deep block. This aids our counter-attacking potential by opening more gaps for the transition once the ball is one back. 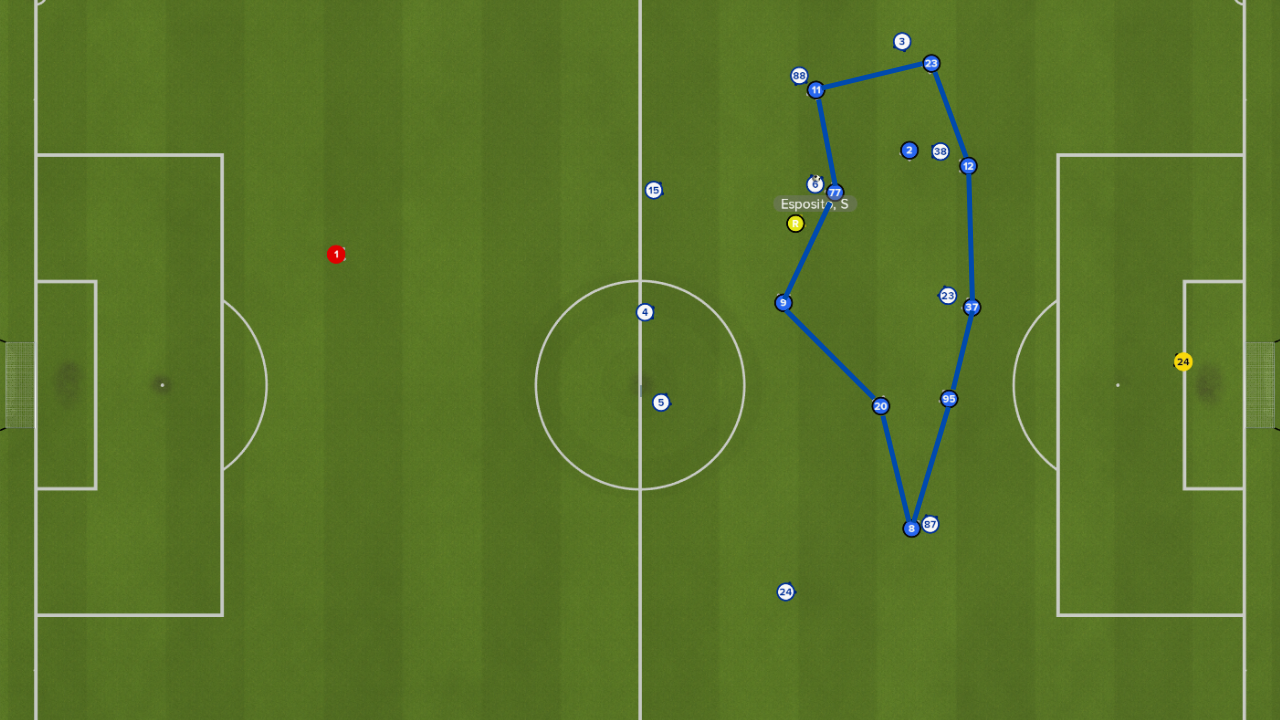 To ensure the lines are compact the line of engagement is set to low whilst the defensive line is left on standard. This limits the space opponents have to play in, to further nullify and frustrate opponents you can implement opposition instructions in an attempt to force the ball into areas where you are strong. 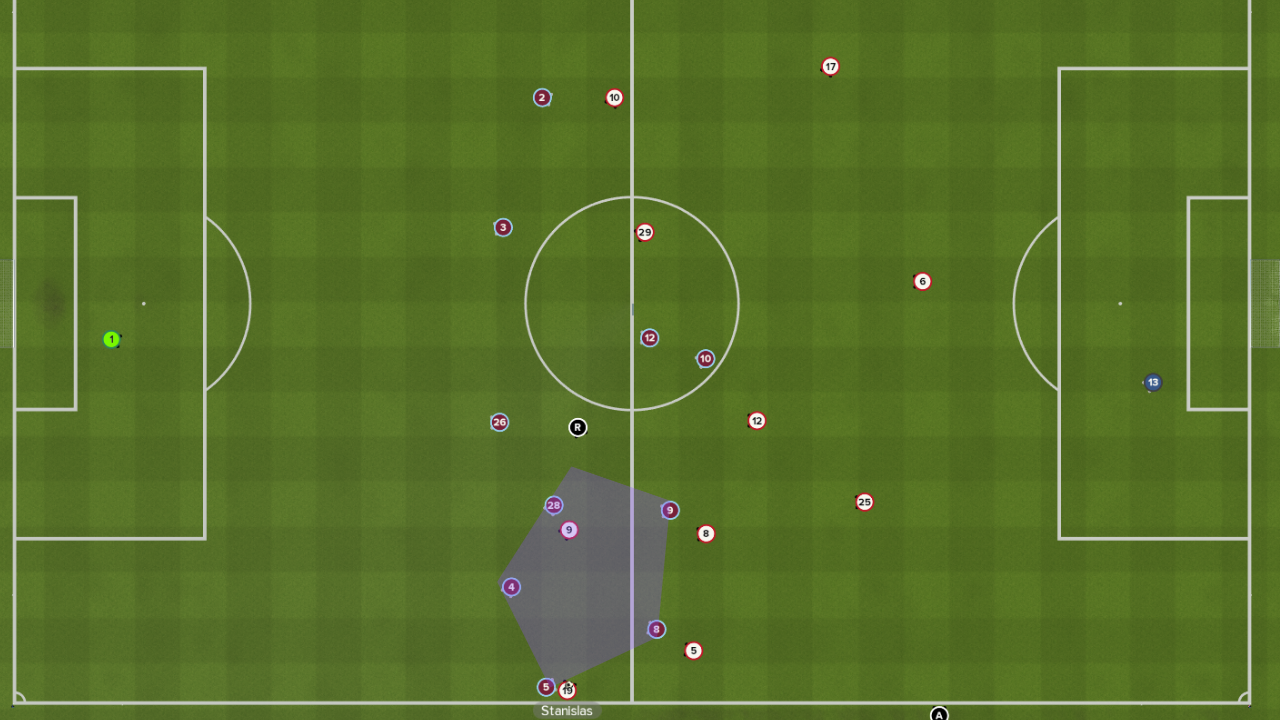 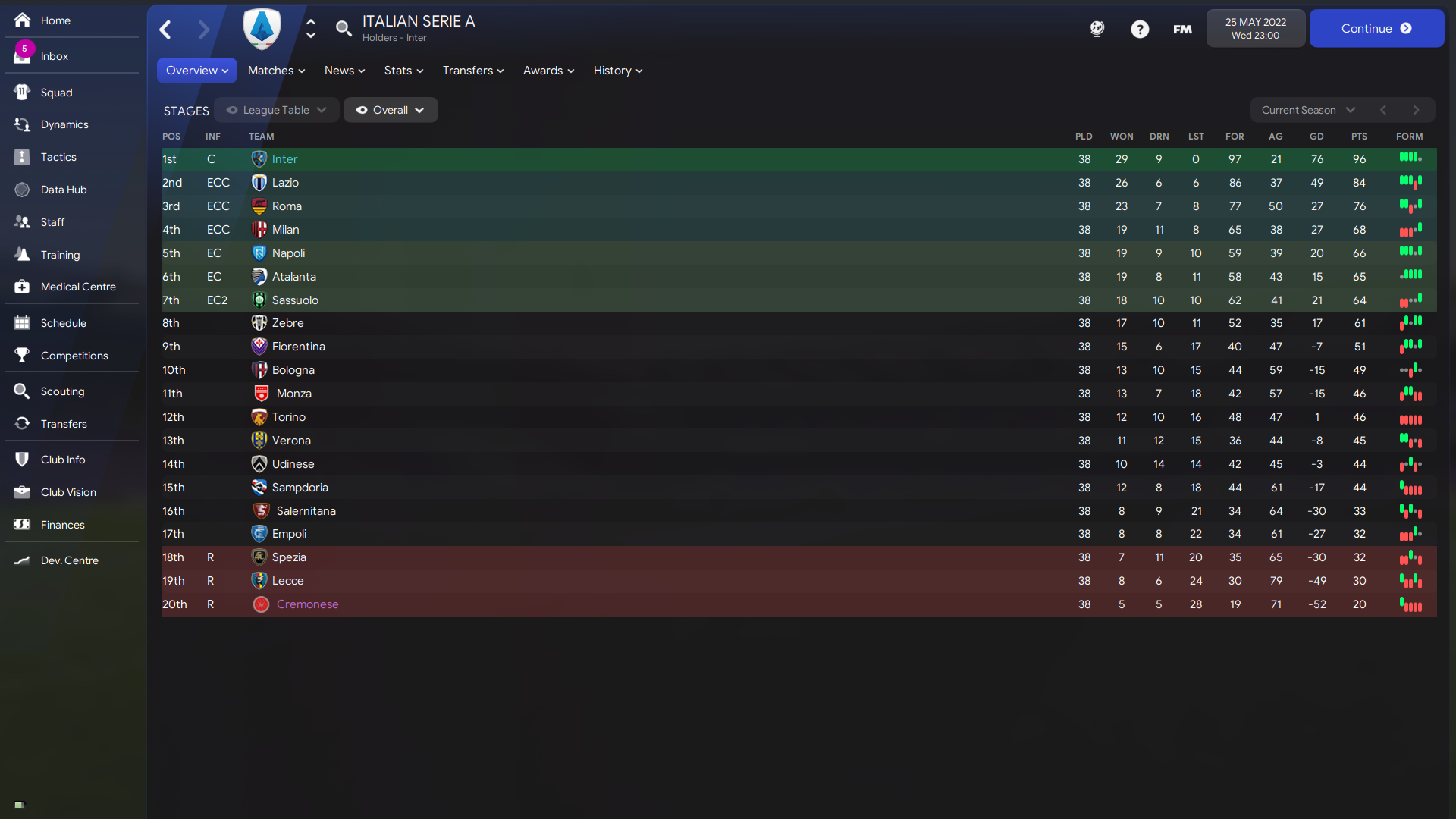 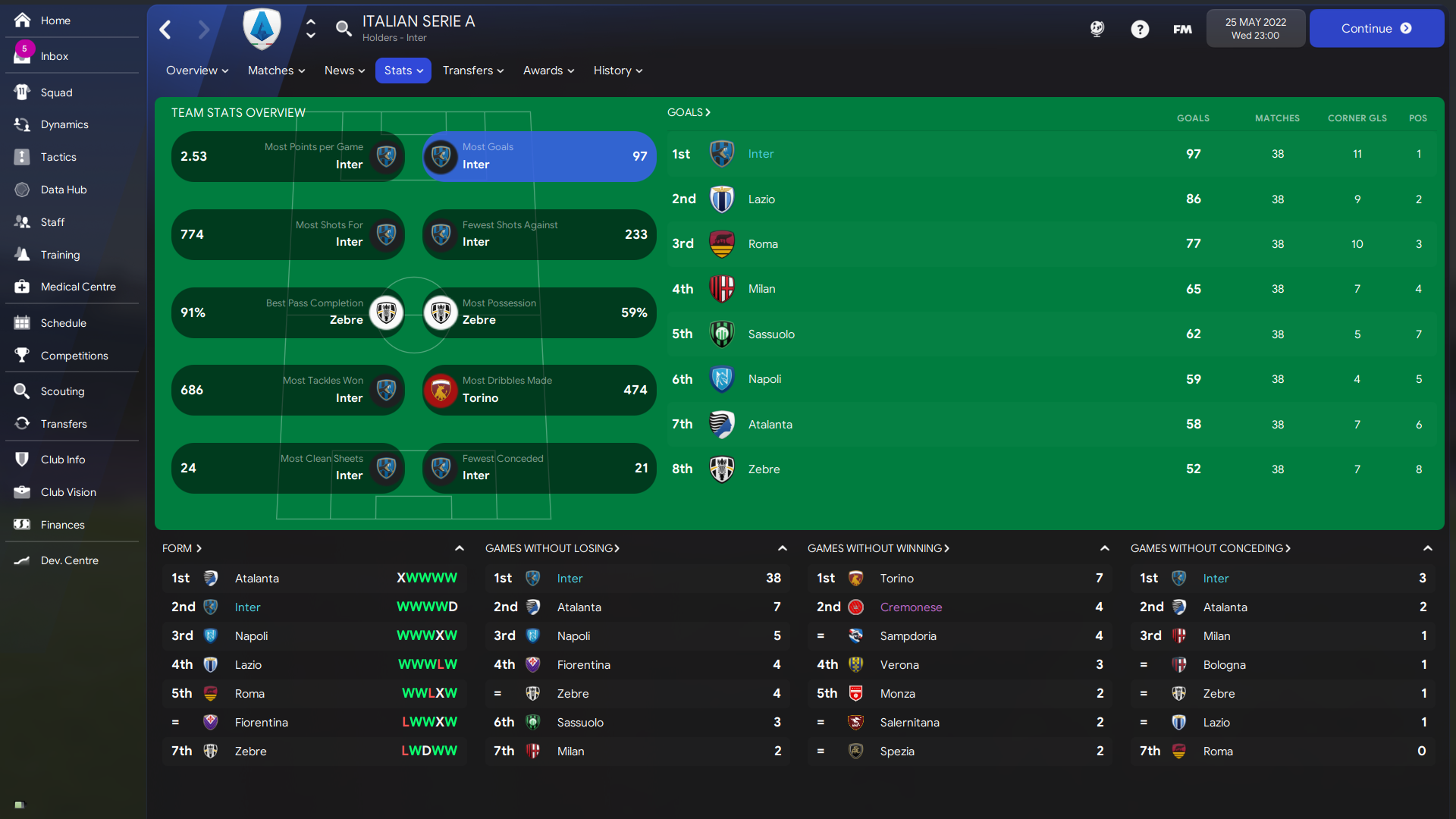 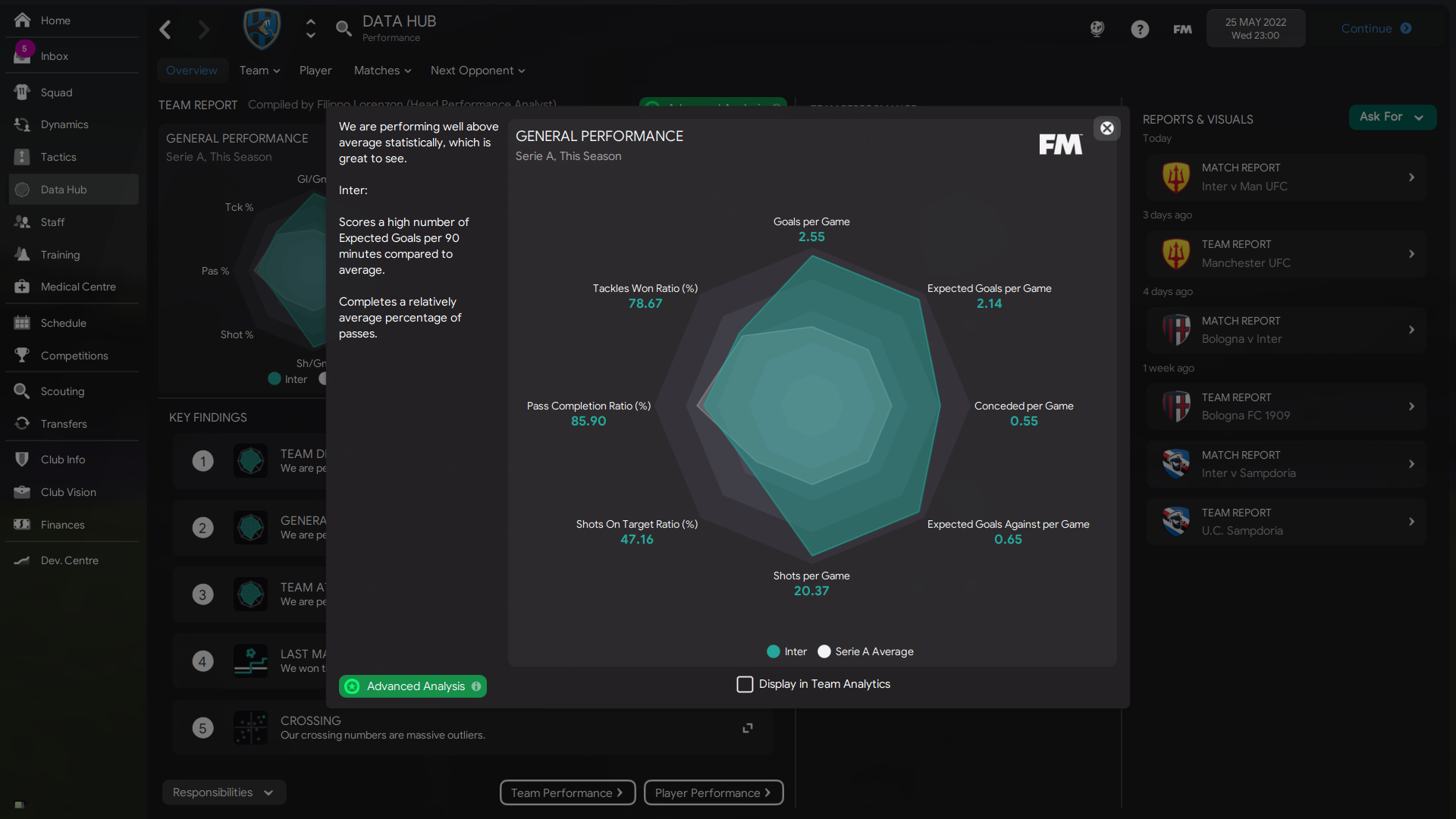 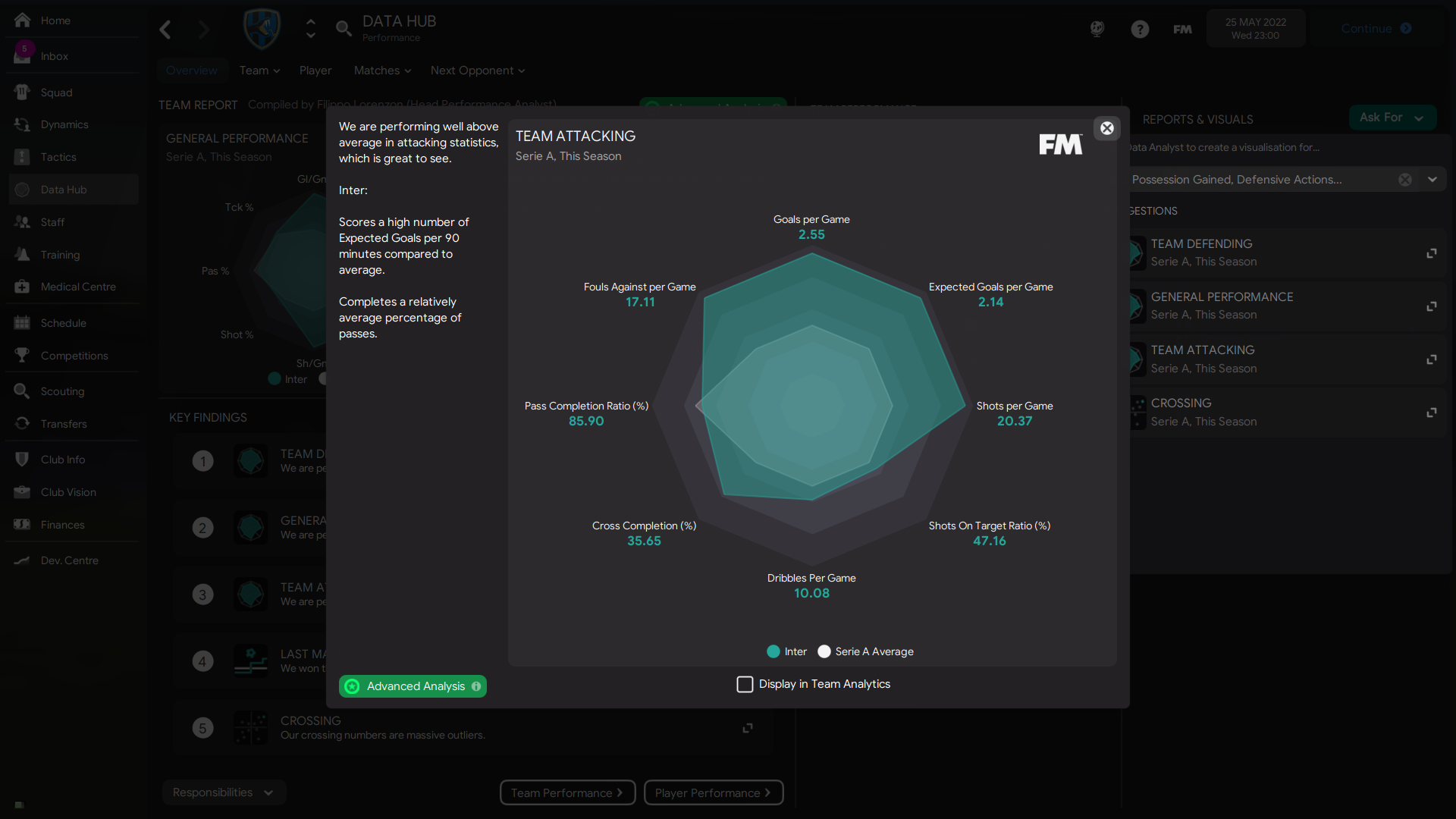 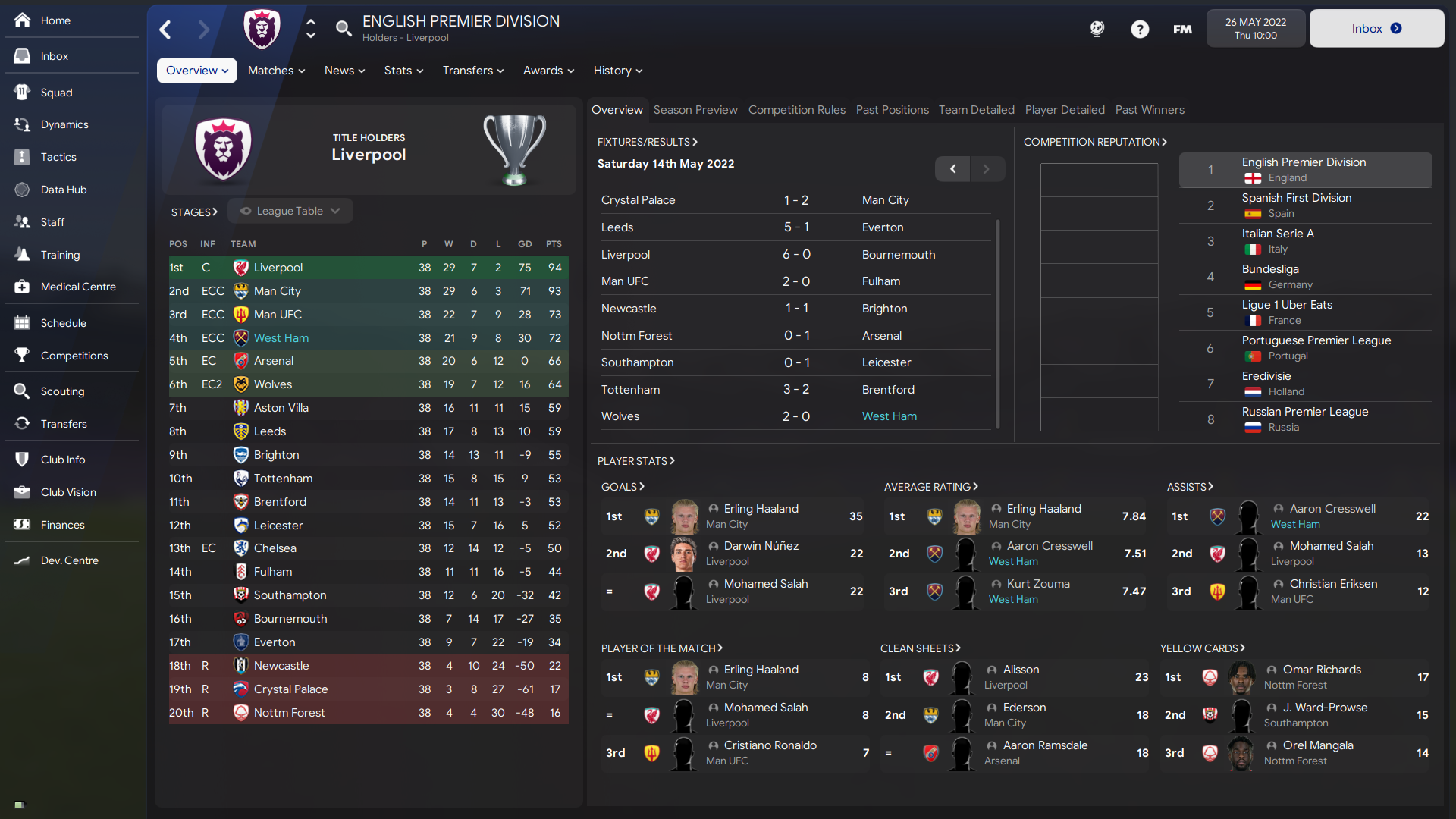 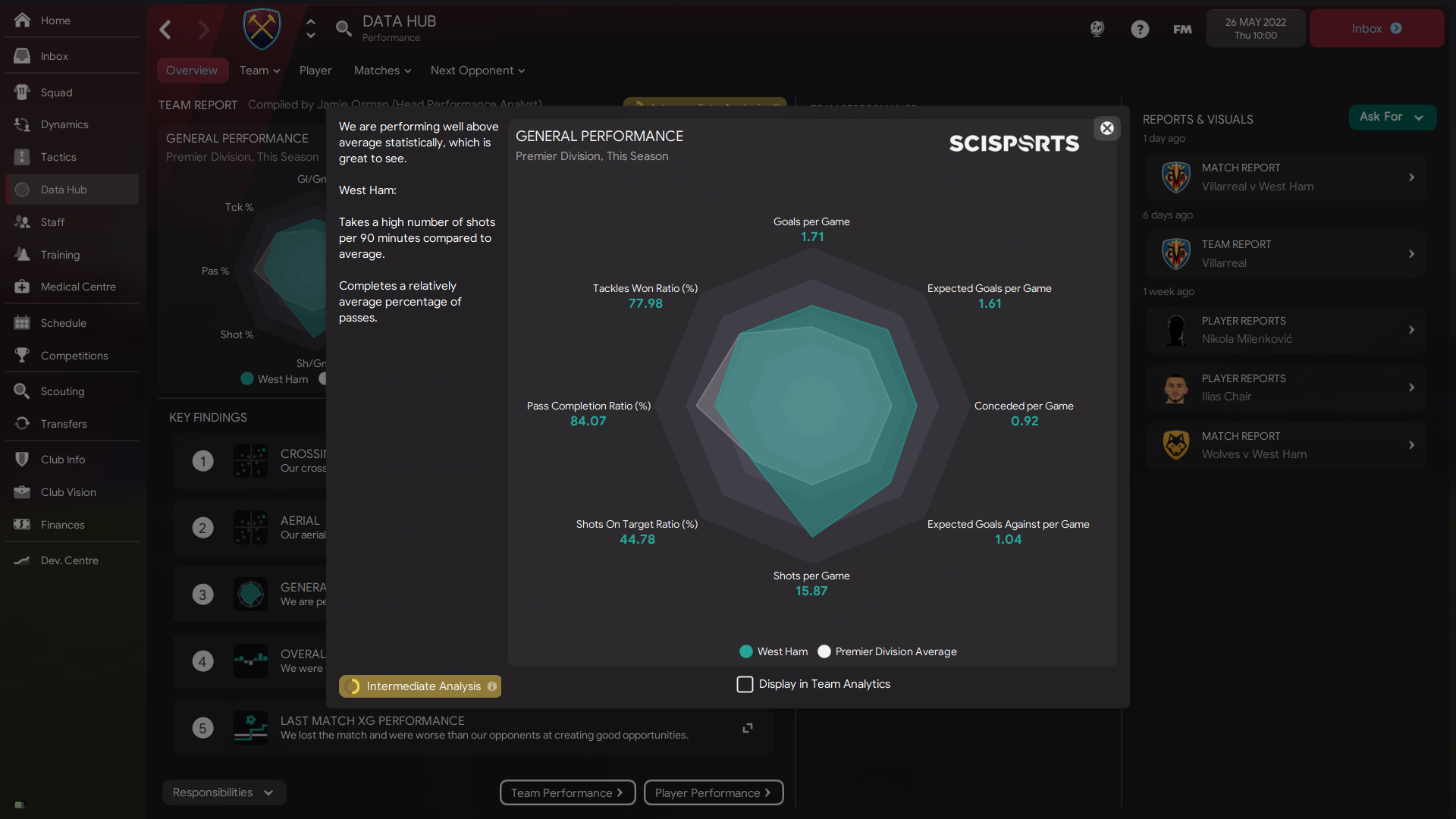 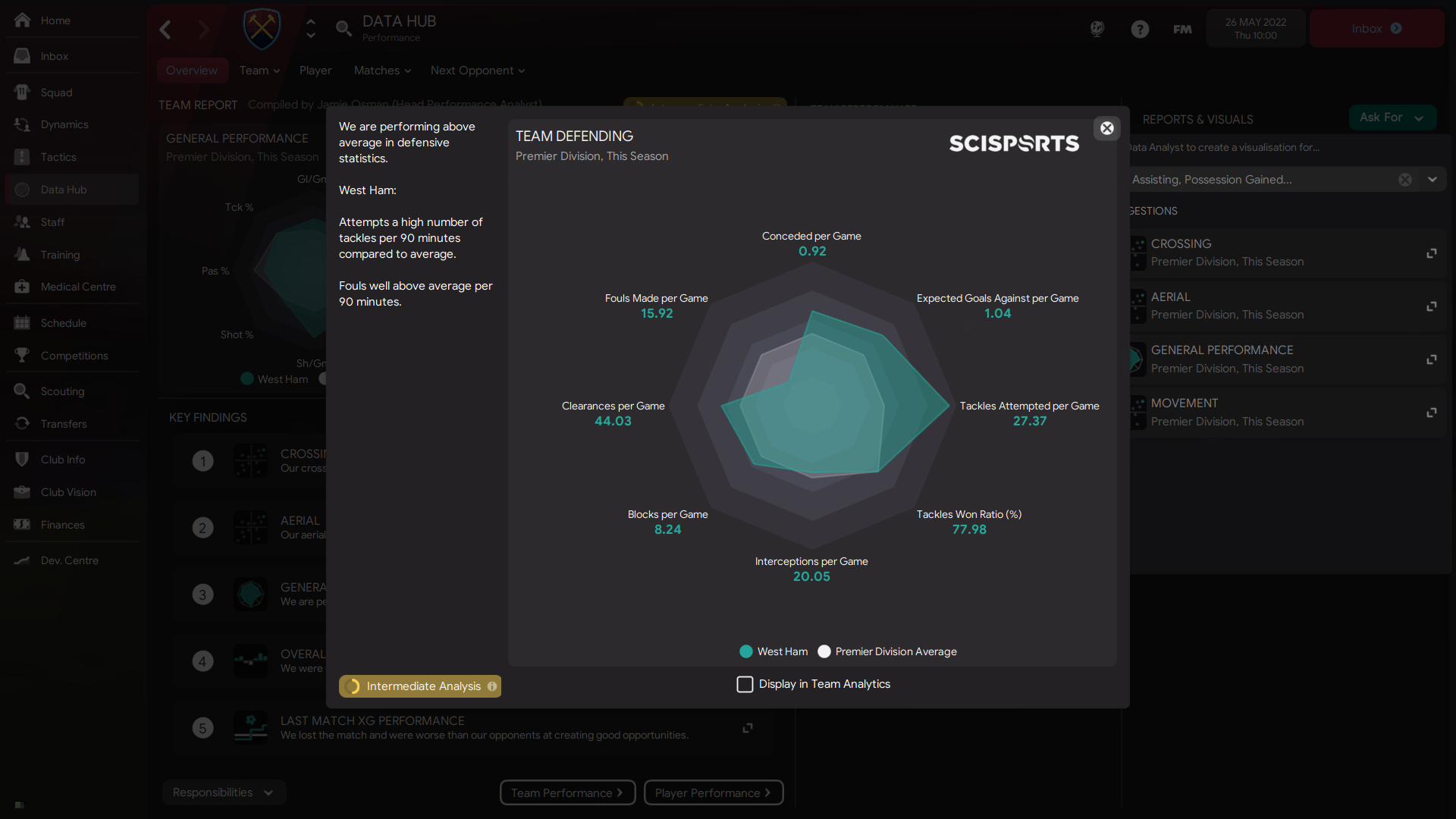 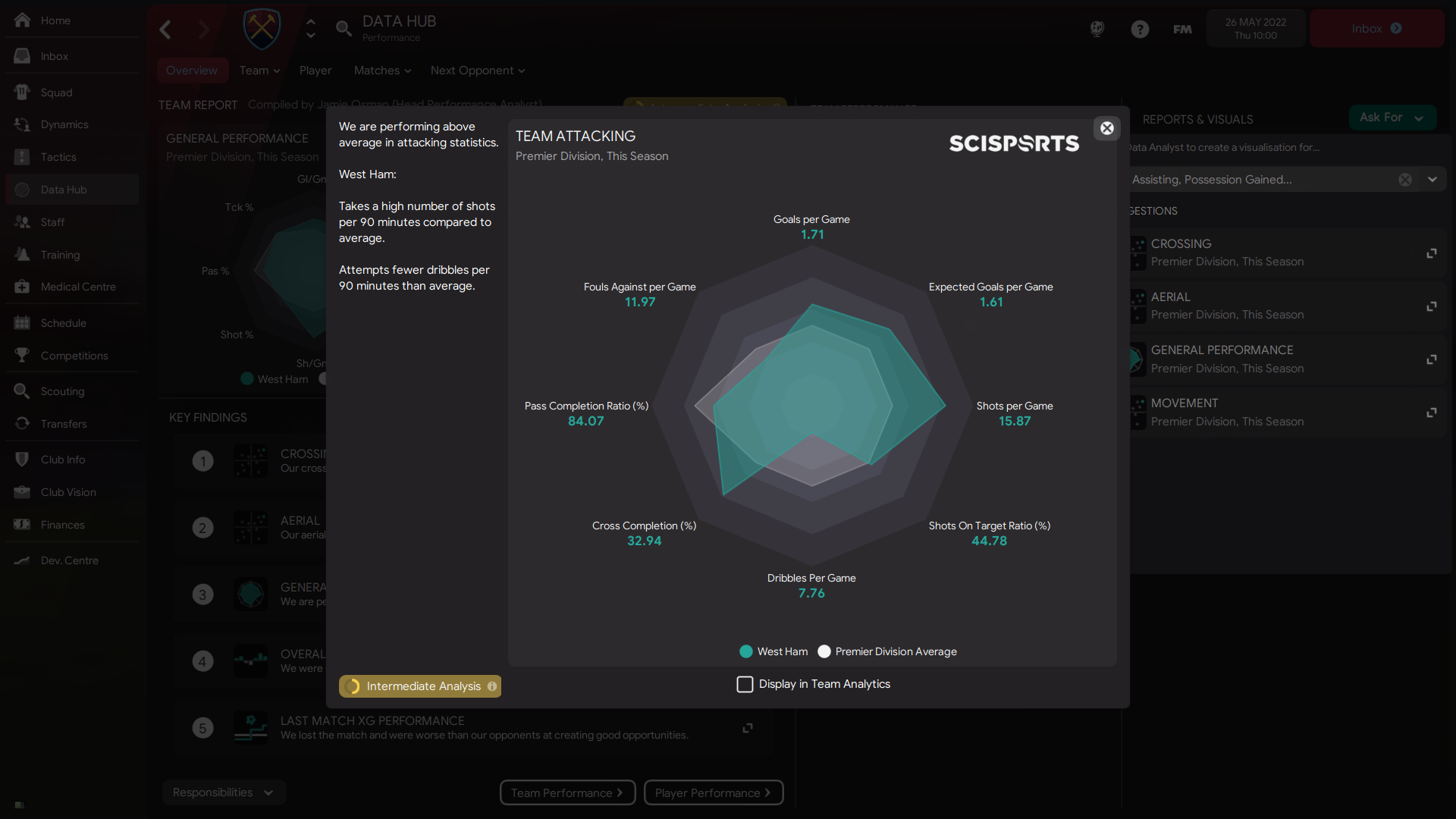