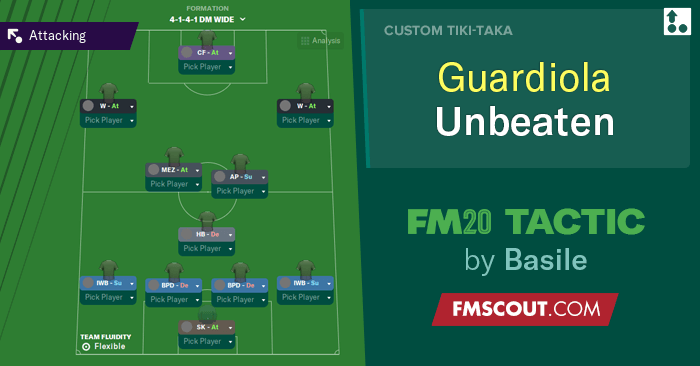 I've been playing for a number of years but this is the first time I've decided to upload one of my creations (Probably due to the increased time inside from a certain pandemic).

The tactic is inspired by Guardiola's Bayern team utilising IWBs. It's been hugely successful for me with Inter Milan, winning the league twice in a row with only 1 loss over the two seasons.

I went 66 games unbeaten in the league and 1 loss over 2 seasons. Crowned champion and 102 and then 105 points respectively. You're looking at conceding a goal once every 2 games and scoring around 2 per game. 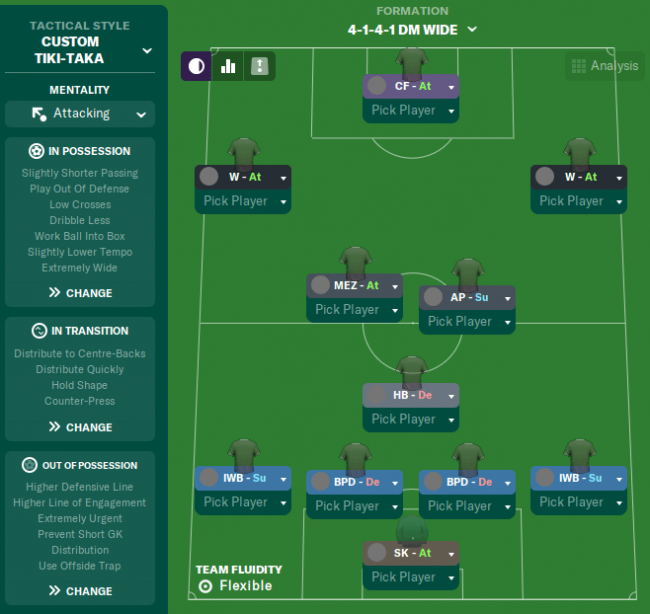 Aim for all players to be good on the ball, I looked for 13+ passing stats and have a high work rate. Generally speaking I also like to have players who are okay with both feet.

SKA - Nothing particular to note here.

BPD - D - I prefer to find centre halves that are fast for recovery if needed.

IWB - S - Quite important part of the team. You want highly intelligent players with decent passing stats but also physical as well to get back into position. I've converted midfielders with average tackling stats for these roles. Think Joshua Kimmich.

HB - D - Another very important player, aim for Busquets but with more physical attributes to get around the pitch. Florentino Luis became the perfect player for me.

The two advanced midfield positions I've played around with a lot and depending on who you are playing/what you have available this can be flexible. Most often I've ended with mez -A (bruno fernandes) and AP-S (Sensi) but a CM-A/S and B2B has also worked well. Think KDB/Silva combo.

W-A - Both wingers play an important role in providing width, assists and goals. Work rate, stamina, pace, crossing and passing and important here. I use players like Asensio and Adama Traore. Ensure their best foot is on the outside (Right winger, right foot).

CF -A Will get the goals! Lautaro Martinez has been perfect for me as he has great passing, work rate and finishing attributes. He scored 46 goals in my most recent seaso. 36 in 35 in the league.

I've used it as virtually plug and play, occasionally changing to balanced if it's a big away game. I've not had as much success in the champions league, reaching the semi final in the second season but where this tactic may struggle (or require some more tweaking) is against really good teams.


Given how important the IWBs and therefore their stats are I wouldn't advise trying this with a lower league team but do let me know if you do and it works.

Please post any feedback/questions, cheers all and wishing everyone good health!