When you first take over a club you will be emailed an overview of the clubs' plans going forward, this includes the type of football the board expects to see. For example, they may ask for an attacking possession style or a counter-attacking style.

You should consider this before building your tactic, although if you are successful on the pitch the board won't mind what style you ultimately go with. 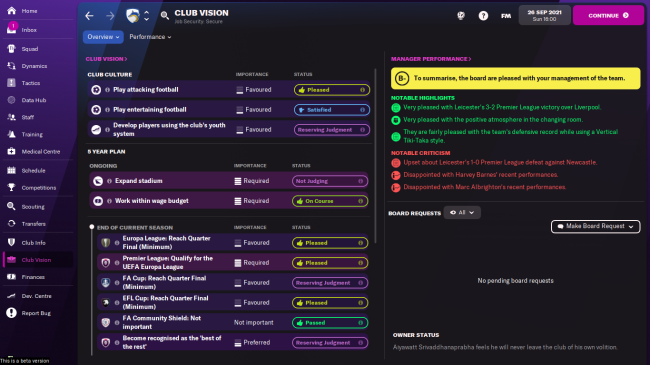 
After checking the culture it is a good idea to check your squad. The board may want you to play possession football but after checking your squad you might find you don't have the players to play that way. You can then keep this in mind when signing future players to fit your system.

Also, there is no point playing 442 if you only have one striker at the club, so build a system and formation around the squad you have. 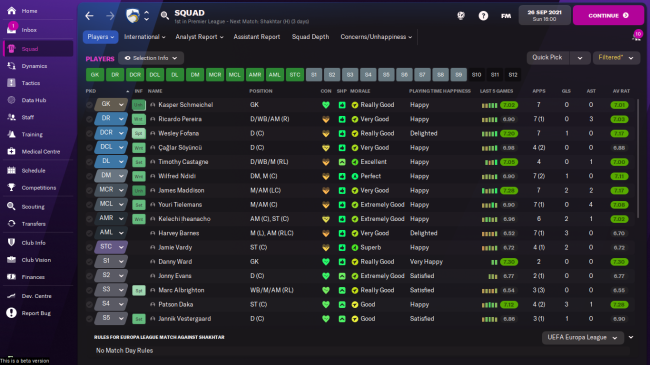 To get a better understanding of the depth in your squad you can utilise your assistant manager. He will provide you with lots of useful information and he will give you his opinion on who the best players are for each role and position.

This is a good base to start from but remember to always check the players' attributes yourself as the assistant can make strange decisions on occasions. 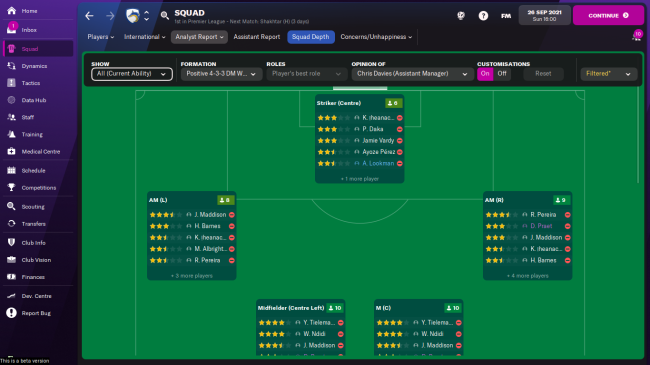 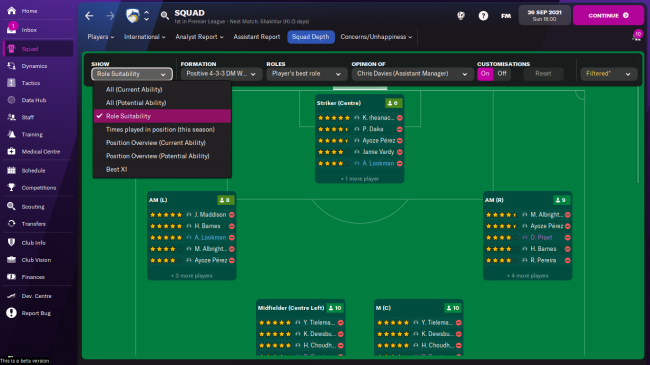 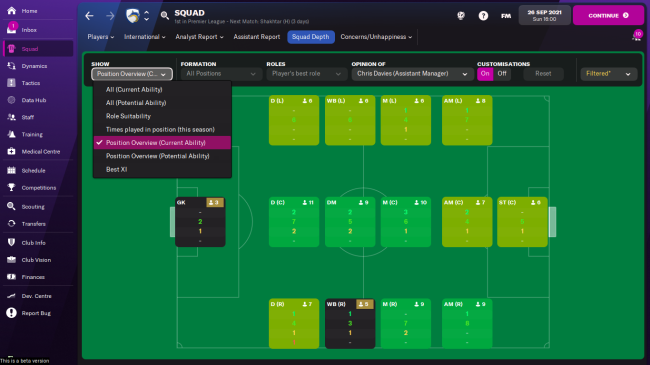 Comparing your squad with the competition


This is a great way to see how your team stacks up with the rest of the league, you can see everything from composure to height and work rate etc.

So based on the comparison I could see my defenders lacked pace compared to the rest of the league. My defenders were almost the slowest in the entire league, therefore it would not be wise to play an aggressive high lane and the offside trap leaving space behind for opponents strikers to run into. 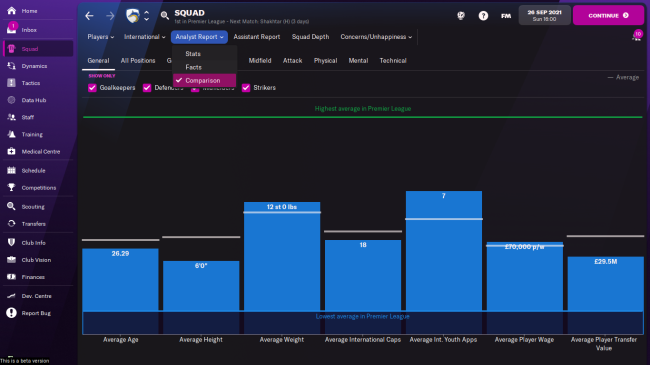 However, my team has a good work rate and tackling ability, along with decent passing and decision making. This can be the foundation of a pressing and possession-based system. 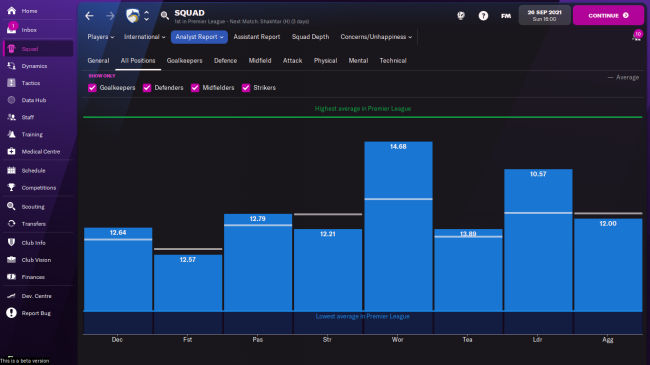 Leicester is quite well rounded and versatile so you could easily go the other way and play a more solid mid-block and look to hit teams on the counter with the pace of the front men running in behind. 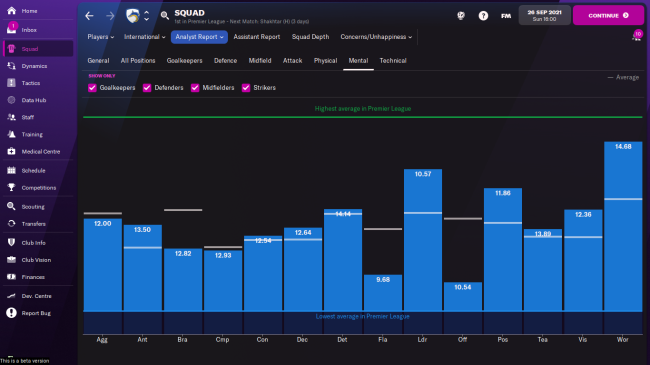 
Now you have all the information you need to start to build your tactic. Your assistant again is a great starting point as he will offer you some suggested playing styles if you are still unsure.

You could also use this information to build another tactic that you may want to use for tough away games or to switch into when seeing a game out. 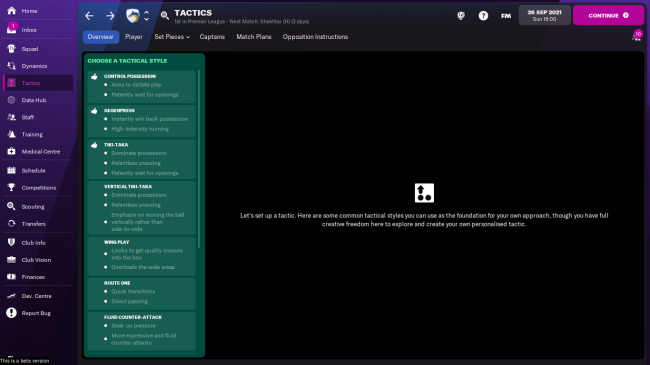 Before deciding your style of play you will see the team instructions that come with each type of style, shorter passing and lower tempo for possession styles, with high intensity and direct passing for gegenpressing systems. 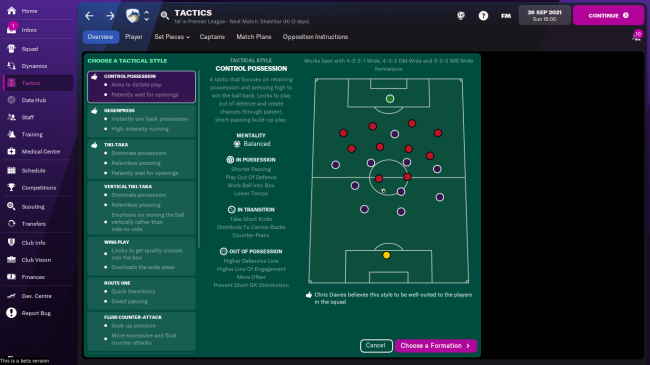 Once you have selected a style of play you will be presented with 3 ideal tactics that complement that style of play. Such as the 4-3-3 for possession or a 4-4-2 for direct counters etc. Your assistant will again recommend a formation based on your current squad. 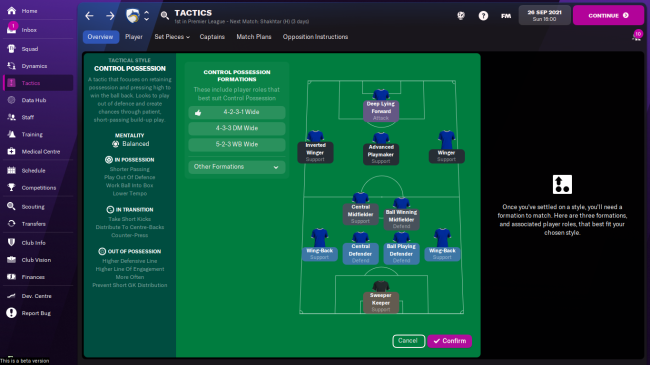 Then you can pick the roles you want your players to play, a good starting point is to simple give every player their preferred role and go from there. During the preseason games, you can then experiment with different roles and combinations to find something you like. 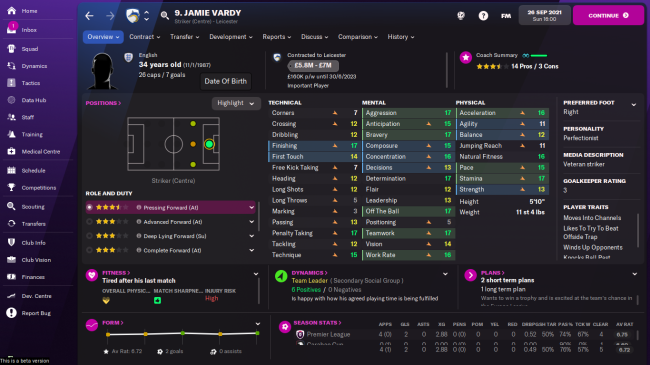 
These should be informed by your squad analysis and comparisons, for example, if you have players with low stamina and work rate it is not in your best interests to play a gegenpressing style.

I have set my team up to press but not to be all-out running and pressing, I have also kept a standard line to help take advantage of defenders good positioning and limit their weaknesses like lack of pace and acceleration. 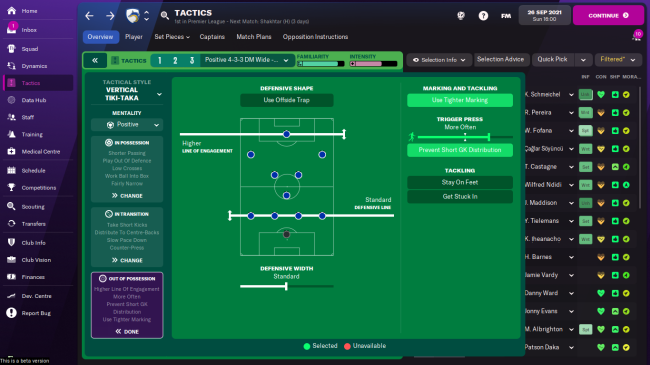 I will also set up to play more a ball oriented style of play, keeping the ball but not for the sake of it. Another reason I selected the standard line as if I set my team too deep it will have a negative impact on the teams' ability to play possession football. 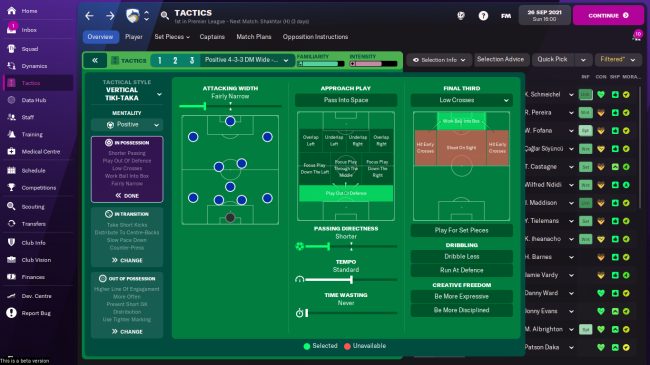 Finally, the team is set up to be more proactive than reactive and counter-pressing plays into the work rate and stamina of the team especially the midfield and forwards.

However to limit the amount of energy they use I will not select the counter option allowing the players to decide when is the right time to counter and when to hold their shape. 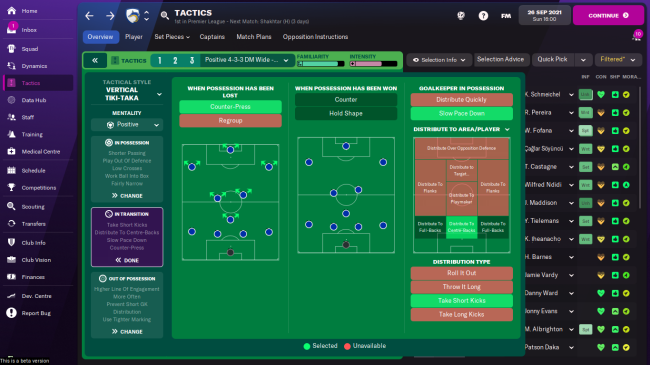 There's also a video of me walking you through how I set my tactic up here.

Discussion: How to create a tactic on Football Manager 2022