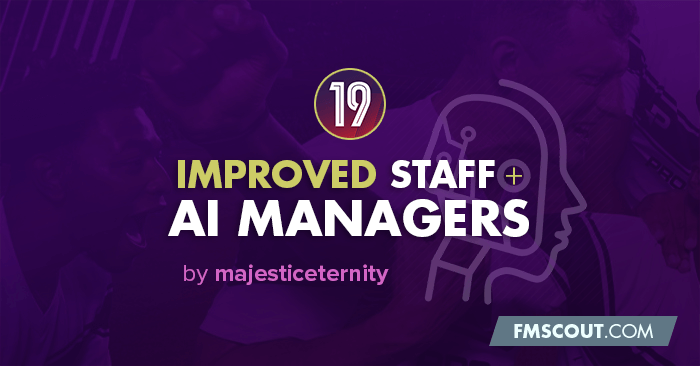 AI will always have issues, just like real-life managers and staff. But this is an attempt to improve (at least slightly) the AI; most importantly poor squad building, rotation, player development and the waste of youth that seems so prevalent.

AI is improved to varying degrees, so that each person still has individuality.

There are 2 Versions: Preferred Managers (staff who prefer to manage), or ALL types of staff(over 400,000 changes, which includes the Preferred Manager changes).
You can use ONE at a time: either to make things harder against just managers, or not sign any staff except those that retire and become "new" staff. Or make things easier and hire high quality staff to help you at your club. Whatever you like.

Note: Poor ability staff haven't been changed much, there are far too many to edit, and there would be little effect anyways.Also, due to Potential Ability caps, the settings added in the editor will not always apply exactly.

ALL Types of Staff
Preferred Managers Only

What does this include?


Tested for 10 seasons with 80 other data files.

How to get improved AI managers & staff on FM 2019

Move the downloaded .fmf file to your editor data folder. By default this is located at:
/Documents/Sports Interactive/Football Manager 2019/editor data
If that folder doesn't exist, you need to create it yourself.

Start a new career game with this file enabled.