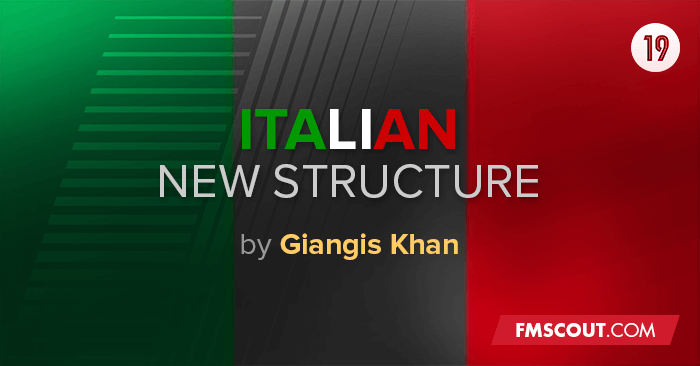 Season from 1/8 to 1/7
Market from 1 July to 31 August and from 1 January to 15 January
One disqualification day every 5 yellow, three every 10 and 4 every 15
TV rights and cash prizes for each Championship
Cash prizes each round of each cup
Each championship: 3 substitutions of 12, maximum limit of 25 players in the team, 2 U21 in training, maximum 7 foreigners (of which 4 are non-EU) in the team, minimum 4 U21


Serie A 8 teams, 4 rounds for 28 total days, 1 direct relegation 1 through play-off with the second in B

Serie B with 12 teams, 3 rounds for a total of 33 days, 1 direct promotion, 1 via playoff with the penultimate in A, 5 direct relegations

C series of 4 groups of 16 teams, 2 rounds for a total of 30 days, 4 direct promotions, 1 through the playoffs between the second, 8 direct relegations, 4 via playout between the third and fourth.

Serie D from 8 groups of 20 teams, 2 rounds for a total of 38 days, 8 direct promotions, 4 via playoffs between the second.

Italian Cup, five qualifying rounds in August, then one round per month until March, all teams from D to A participate.

Super Cup, between winning Serie A vs winning Italian Cup

Supercoppa C, among the four winners of the respective rounds

Supercoppa D, among the eight winners of the respective rounds