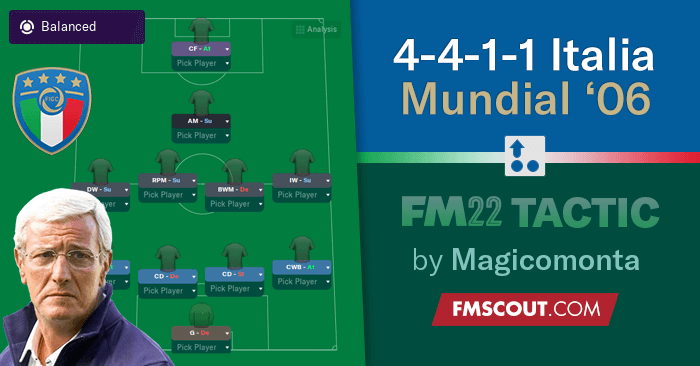 Today magicomonta presents the tactics of the Italian national team of Marcello Lippi world champion in 2006.

The strength of the national team was undoubtedly the defense, so much so that Fabio Cannavaro that year won the golden ball competing for it against Gianluigi Buffon and suffering only 2 goals in the whole world.

In the various modules tested by Lippi in that review there are 4312, 433 and 4231 which will then become the most effective because it could turn into 4141 when the team is not in possession of the ball and this is exactly what we are going to emulate.

The defense was made up of a classic central defender.

Alessandro Nesta up to the 3rd match of the group then by injury replaced by Marco Materazzi who will prove decisive both for that match and for the whole world since the goal in that match of 1 to 0 , the 2-0 was the most famous race without the possibility of receiving Simone Barone's ball on the counterattack with Filippo Inzaghi that anyone knew he would never give it to him, and the equalizer in the final as well as causing the expulsion of Zidane.

The two full-backs were at full thrust and attacked as if they were real wings, always remaining high and often entering the penalty area (see Fabio Grosso against Australia and Gianluca Zambrotta against Ukraine).

They were giants like Cannavaro and Gattuso on the right while on the left there was Perrotta which acted both as an offensive support on the left and as a cover for Grosso.

The genius of this team was Andrea Pirlo, a director a wide-ranging capable of restarting the action like no one ever and ahead of him was Francesco Totti, who even with only one leg (he played the world championship with a screw in his ankle) Lippi did not want to give up on him and pays off, despite the many criticisms, taking responsibility for that ball from the spot that weighs like a boulder in the recovery of the match with Australia.

In front the only striker was Luca Toni, a striker able to play both for himself scoring goals and for the others playing from the side both air and narrow of the foot.

The other winger was Camoranesi, a winger who tended to concentrate to allow the overlapping of Zambrotta alternating with him when the full-back cut inside he was wide.

Let's go to the tactics in Football Manager 2022 with the explanation you find in the video. 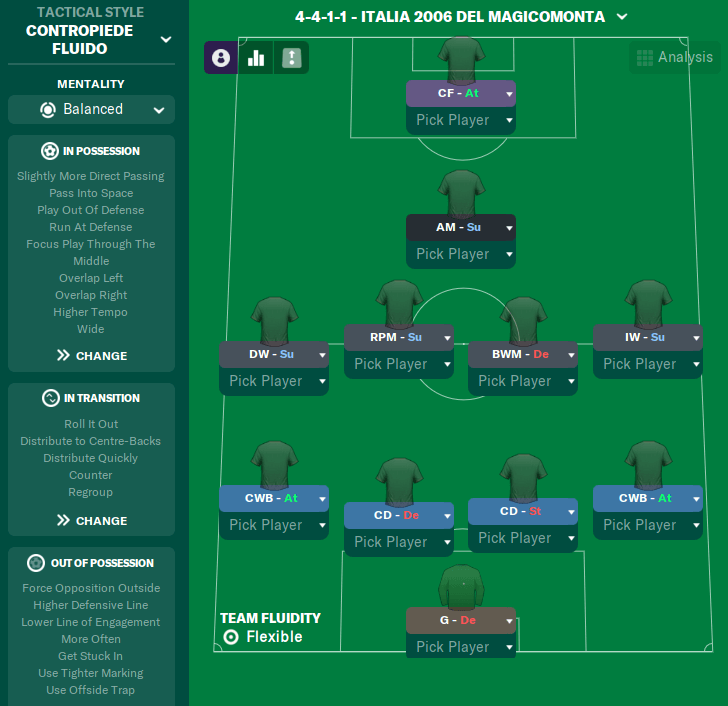 I played that world championship and you will find the result in the video.