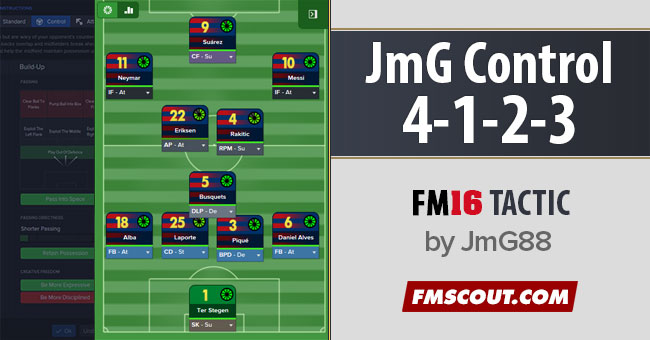 So, this tactic was created to play at a slow tempo and control the game, without necessarily controlling possession. You still create a lot of chances, but more patience and passing is the aim of the game.

You start off with a 4-5-1 basically, which when in possession will pretty much turn out to be a 2-5-3. This is because the wingers cut inside (Inside Forward Role) and the Fullbacks are set to attack, so they push up to midfield and above, making the midfield packed, and having 3 good attacking options moving inside. With this you're still able to control the width of the entire field.

Yes, you are a little open to counter attacks, but as long as you're controlling the game, you shouldn't be conceding a lot of goals.

Player Roles
There's nothing very special about these, all set to help keep the ball on the ground and build up the attack from deep. The Midfield is pretty much all playmaker roles, the Roaming Playermaker is a key player, the heartbeat as it's told on the description. Sweeper Keeper is another that I'm not sure is popular with a lot of people, but for this tactic it offers a bit more help in defence to cut out the counter attacking threats.

Team Shape
Very low tempo with the entire width of the field, and as mentioned before, with the fullbacks pushing higher up the field, it'll be sure you wont be caught short on that part.

Defence
Slightly higher defensive line, we don't want this set to the highest because it will increase the counter attacking threat. Slightly high gives you enough that you can still stay close to the rest of the team up field. Closing down is set to the highest, pressuring the opposition constantly to win the ball back, all part of controlling the game, forcing risky/poor passes. Tighter marking and preventing short GK distribution are other forms of pressing the opposition to control the game.I prefer my players to get stuck into tackles, receiving cards isn't a big issue. But this could be set to stay on feet, with the same effect, but may vary the effectiveness.

Build Up
Playing out of the defence is the best way to go, keeping the ball on the ground and picking out passes to move forward bit by bit. Personal preference if you want to "pass into space" or not, I use it as I have a lot of players with great vision and great passing ability, so if they see a key pass into space, they take it. If you don't have a player like that, best to take it off and allow it to create naturally with short passing. "Be more expressive" again, a lot of players with great creativity that I am comfortable with them having that freedom, but you can uncheck this if it doesn't suit your squad. It wont affect the overall gameplan, the only thing it does, along with not passing into space, is give you a lot more of a solid approach.

Attack
Look for overlap, work ball into box. They all speak for themselves really. Overlap, because we have those inside forwards cutting inside and the fullbacks pushing high up the field, over-powering the defence of the opposition. Low crossing is to help keep the ball on the ground, as well as maintaining control of the ball throughout, rather than pumping the ball into the penalty area to lose possession.

http://i1349.photobucket.com/albums/p758/JmG_88/Corners_zpsaefgurk9.png
Corners, keeping them short, keep the ball, building slowly to move into the box, also, with Run at defence set, this can create some lovely runs from the wingers, pushing into the box with the ball from the corner. Always keep your fullbacks and DM back for set-pieces, ensures you have pace and presence if you lose the ball quickly, also having one of the CM's lurking outside the area, giving a better passing option.

http://i1349.photobucket.com/albums/p758/JmG_88/Free%20Kicks_zpsskde4con.png
Free Kicks, set to near post to help keep the ball, my personal preference is to have it set to "short", this allows the team to spread out and utilise the full width of the field, either choice wont affect your tactics, so do as you please here.

My first tactic, so any constructive criticism is welcome.