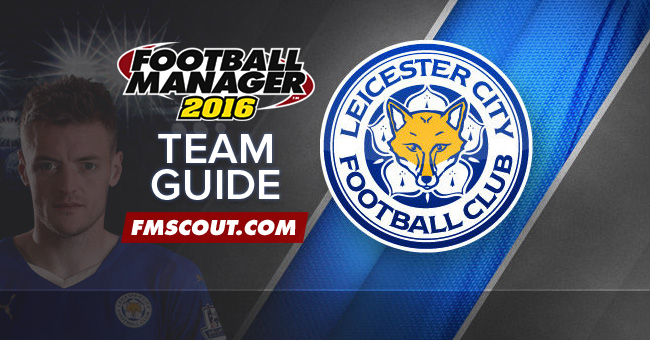 Leicester City, also known as The Foxes are in the limelight at the moment, they are flying high in the Premier League and have an on fire Striker in record breaker Jamie Vardy. They are my club and one I have supported since I was 7 years old (I’m now 35).

Leicester don’t have the richest history, their most successful period came in the late 90s early 00s where under Martin O’Neill he guided them to 3 consecutive top 10 finishes in the Premier League and 3 League Cup final visits, 2 in which they won. Now under Claudio Ranieri (or you if you take the challenge) they have a squad and the finances in place ready for a push up the Premier League and hopefully add to their mediocre trophy count

Club Overview
As you can see from the screenshots below Leicester City are “Rich” as they have a sugar daddy Thai owner, they also have a good % of Season ticket holders (23k) to their ground capacity (32k). Their league history has ups and down, but now they are definitely on their way back up!

Depending on how confident you are in your ability you can change the expectation. The board expect a minimum in the league of “Avoiding Relegation” but you can if you wish change this to “Mid table finish” or “Top half finish”. You can also change your expectations in the cup competitions, below I have done 3 screens, one the lowest expectation, one the middle and one the highest, transfer budgets vary on these from £9.3m - £13m

Leicester’s squad is pretty good for a team expected to fight relegation, if you compare them to other teams in the league they come out on average in the middle, here is the team comparison page

As you can see when it comes to Work Rate they are ranked 1st but come 20th when it comes to First Touch and Passing. Obviously this is an average of the whole playing squad, Leicester do have some good passers in their squad as you will see below.

Leicester have 2 very good Goalkeepers, obviously Schwarzer is getting on and will more than likely retire at the end of the season but with Schmeichel you have a very good standard Goalkeeper for the Premier League.

Leicester’s defense is OK, Liam Moore is one to watch as he is young and has good potential, if you train and tutor him right he can become a major player for the team, he is however out on loan for the first season. Fuchs at Left Back is quality and possesses 17 for long throws, this can be deadly on FM16.

One area you could think of improving is at CB. Leicester have a few average Centre Backs, Alvaro Balanta is one CB you could sign, he is amazing on FM16 as most people know 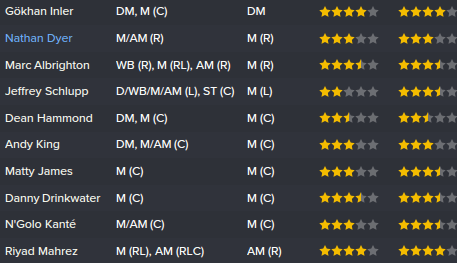 Leicester's midfield is very good, Inler is a fantastic holding midfielder but also can play higher up and in my 1st season he scored a couple of long range belters! The 2 main players I feel in midfield are Danny Drinkwater and Riyad Mahrez.

Drinkwater is a fantastic playmaker and train him right he can become a leading premier league midfielder, it’s not uncommon for him to get England call-ups on FM. He possesses some great PPMs and has all the attributes to control a match when required

Mahrez is fantastic on FM, his dribbling skills are second to none, I tried him as a Raumdeuter on my save and he was incredible, he can play anywhere in the attacking midfield, but for me he is best served on the Right.

If you want to improve the midfield then the Left Wing could be one to concentrate on,yes they have Strikers like Okazaki and Kramaric who are good on the left but if you want a Winger then Jefferson Montero from Swansea is usually available on either a transfer or on loan

Leicester have some very good forwards at their disposal, all with very different qualities. Ulloa is a very good strong target man, whereas Okazaki and Kramaric are hardworking and skillful. But the main man as in real life is Jamie Vardy. He has all the skills to run that line either as a lone striker or in a pair with one of the others.

To be honest Leicester don’t have the best youth players to start with but here are 4 of the best. Choudhury can be trained into a really good holding midfielder, but he requires game time and with the numerous midfielders you already have that could be hard work. Johnson although down as Rb for his best position is best served being trained as CB. Tom Lawrence will be a really good AM/AP if you train him right and Ben Chilwell could be a good LB in the future

So you have now seen the squad but what tactics should you employ?

A quick disclaimer I am not good at creating tactics, but these are the best 2 formation that you could use for Leicester City 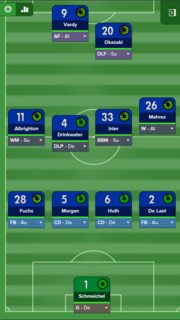 Player roles are hard to work out in a 442 but Drinkwater as DLP will be able to control the game and if you can get the best out of Mahrez and Vardy your right hand side could be deadly. With this formation you need to get them working as a unit, defending in 2 blocks of 4 and trying to hit the front 2 as quick as possible. This is the tactic I used with Leicester and it worked well for me, in FM16 3 in midfield seems to be most people's preferred formation

Both Fuchs and De laet are naturally attacking full backs so having the holding midfielder is a must and Inler is fantastic at that job, this frees up the other 2 midfielders to venture forward and control the game. I said earlier Mahrez played under me as a Raumdeuter but on here I have him as an Inside Forward, this is because you could easily make it so your wide players swap over during the game. I have Albrighton on the Left Wing but like I said before you have numerous more attacking options as well


Like I say these are what I would use but there are many other formations you could use.

With Leicester attacking full backs you could play 3 CBs and have them as Wing Backs, if you trained Mahrez as an Attacking Midfielder then you could be a 4411 or 4231 as well. There are lots of options.

Leicester City are one hell of a challenge on FM16, they have the potential to be a big club, they have the fan base and they have the backing; now they just need a manager to take them there, can they get to the very top? I wish you all the luck in the world!