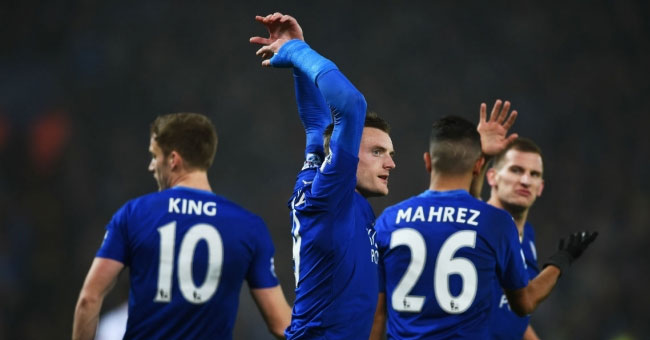 Not many people would have expected Leicester City to be leading the Premier League table after 26 games, but Claudio Ranieiri's men have been good value for their place on top of the table.

Although a majority may still expect their fairytale to fade away, there is a compelling reason to suggest that the Foxes should be favourites at footballtips.com to lift the crown come May.

One of the most impressive facets of the King Power Stadium outfit's campaign to date has been the way they have performed against the big teams.

Given that Leicester have already faced the majority of the division's frontrunners twice, including the current other members of the top four, a manageable run-in suggests Ranieri's side could well complete their amazing season with glory.

Although clashes against Manchester United and Chelsea still await them, both away from home, the King Power Stadium arguably have the most favourable run-in of all the teams hoping to be crowned champions.

Leicester also played seven of their games at home, but it could well come down to the final day and a trip to Stamford Bridge to potentially seal their fate.

Given the role reversals at the respective clubs, it would certainly be a fitting way for the Foxes to be crowned as division winners – by beating the outgoing champions in the last game of the campaign.

Elimination in the FA Cup at the hands of Tottenham also means that Ranieri and his overachieving side can focus their energies solely on league responsibilities.

All of the other three title hopefuls have European action to negotiate still for at least one more game, while Manchester City have domestic cup ordeals to contend with too.

Of the other three potential title winners, Arsenal still have to play both Spurs and City, where some of the contenders will lose points.

Spurs also have to play Liverpool and Chelsea on the road, while the Gunners still have old foes United on their list of fixtures.

Fixtures are also building up thick and fast for City and Arsenal in particular, which will surely have a telling impact down the track.

As such, despite Leicester's campaign to date being one of the most remarkable stories in recent football history, don't bet against the Foxes from completing the job and doing the unthinkable – winning the Premier League come May.

Discussion: Why Leicester City should be favourites for the Premier League title