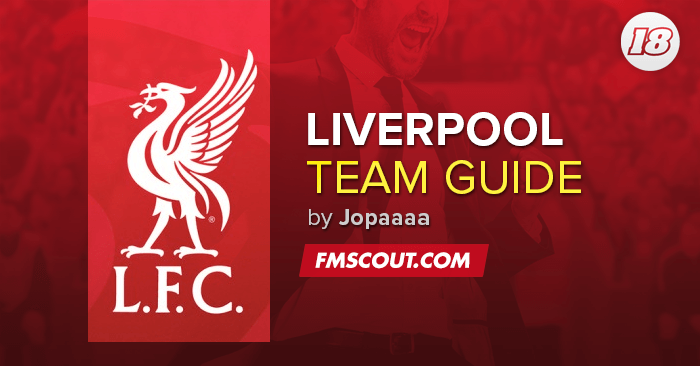 Once upon a time, Liverpool were the undoubted kings of football. Four European Cup titles between 1977 and 1984 cemented their place in history as one of Europe's most successful clubs. The eighteen-times English champions were feared across the continent, and played a brand of football which attracted fans from all around the world. The Reds were an unstoppable force of attacking power and defensive resilience. Whether it was the footballing wizard Kenny Dalglish, the ice-cool Ian Rush, or the hearty Emlyn Hughes, Liverpool always had a source of entertainment on the football pitch.


Fast-track 33 years since their fourth European Cup title, and Liverpool had dwindled in stature, and in ability. Despite lifting the UEFA Champions League title in unprecedented circumstances in 2005, England's most successful football club has failed to lift the league title since 1990, when they were crowned as champions of England for the 18th time. The heroes of old had never been replaced in full. While new heroes were born in the form of Steven Gerrard, Jamie Carragher, Robbie Fowler, Michael Owen, Luis Suárez, Fernando Torres and Sami Hyypiä, they were unable to restore Liverpool to the days of old. An era of greatness had certainly come to a disappointing end. In FM18, Liverpool are in a good state financially. New owners of the Fenway Sports Group, led by John W. Henry, took over the club during a time of true financial struggle in 2010, rescuing the club from near-certain doom. In six years of running the club, debts had been cut down to a manageable amount, and the club had begun making sizeable steps forward economically, as proven by the recent expansion of Anfield which took the stadium's capacity to a whopping 54,074, with the potential of future expansion to above 60,000. Liverpool are now at a place where they are battling the likes of the two Manchester giants, and their rivals from London, in the transfer market. Liverpool can now, as has been proven in recent years, spend big to bring in desired targets. 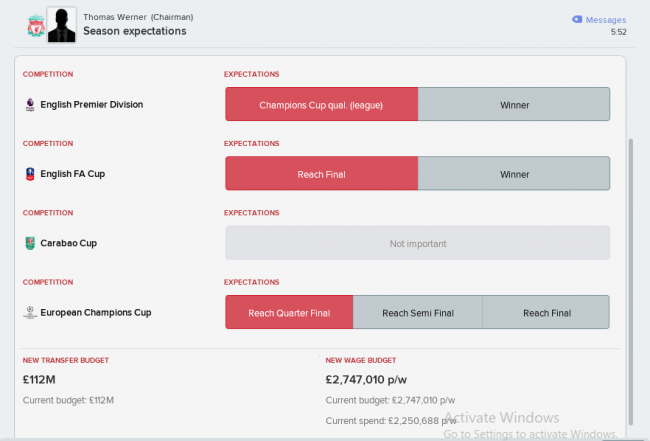 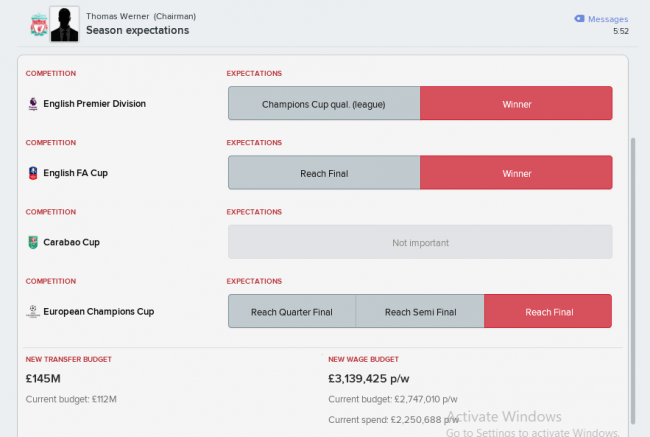 Depending on what you would like your expectations for the season to be set at, you can start with a transfer budget of £112M and £2,747,010 p/w. Of course you may alter the transfer-wage budget difference in order to increase that maximum transfer budget threshold to an incredible £145M and £3,139,425 p/w. This is quite a generous budget to be given in your first season in charge, and you should certainly use it wisely. 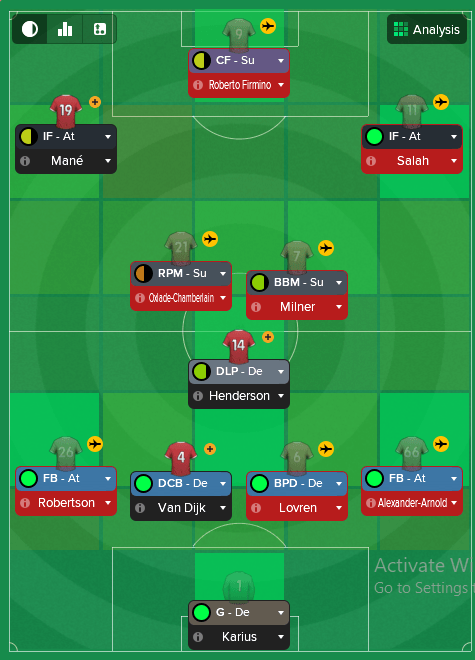 This season, we mainly saw Jurgen Klopp playing a 4-3-3 formation with aggresive, high-pressing, counter-attacking style of football. It worked great most of the season, leading Liverpool to fourth place in the PL and final of the CL, and offering a great and fun football to watch. Early in the season, Liverpool had issues in the back line, but Andy Robertson became first choice left-back with Moreno picking up an injury, and Virgil van Dijk coming in the winter for a record fee for a centre-back really fixed the issues and lowered them. Midfield trio of Jordan Henderson, James Milner, and Oxlade Chamberlain offers high work rate and plenty of energy. On the bench, we have a good defensive option in Emre Can,and a good technical player in Adam Lallana. The attacking trio of Liverpool is one of the most deadliest attacks in the world. Sadio Mane, Mohamed Salah and Roberto Firmino bossed the year and made great names for themselves. There aren't any real quality back-ups on the bench following the likes of Dominic Solanke,Ben Woodburn and Danny Ings. 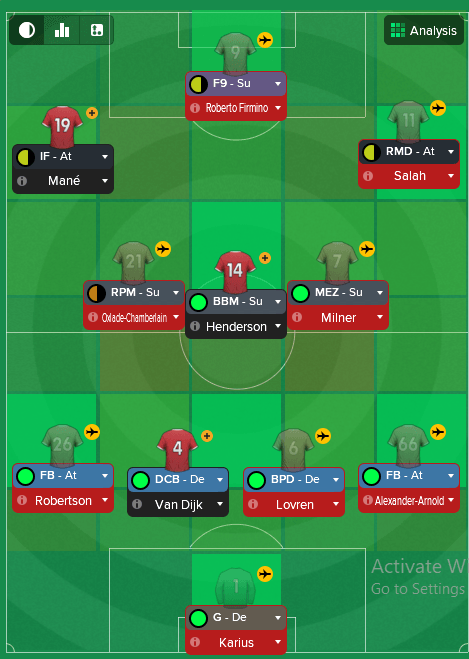 In this formation,we can see that the goalkeeper and the back line stayed the same. Jordan Henderson has been moved up from DM to CM. The biggest change is in the attack where we can see changed roles of Mohamed Salah and Roberto Firmino. Firmino has been given F9 and Salah has been given RMD. This formation will give Salah more option to run in behind while Firmino will drop back more trying to unlock defence for Salah and Mane. Firmino will be given more freedom and more time to pick the right pass.


Goalkeeper:
You might have a dilemma between Loris Karius and Simon Mignolet. Both of these keepers aren't world class and you might want to strenghten this area at the start, even though it shouldn't be your primary concern. Karius is a younger keeper with a better potential but Mignolet is more experienced and probably a better option at the start. We also have the likes of Danny Ward and Adam Bogdan at the club. You can cash in on these keepers if you don't plan on playing them.

At the start, your best right back is Nathaniel Clyne. Unfotunately he is injured 9 months once you start a career and that leaves you with two youngsters. Joe Gomez and Trent-Alexander Arnold. Joe Gomez is naturally a centre-back but he has been playing right-back under Jurgen Klopp and has done okay. Trent-Alexander Arnold is a great youngster with a great potential. He is weaker defensivelly but better ofensivelly than Joe Gomez. Trent might be one of the best attacking fullbacks in the game if you give him some time and work with him. You might want to bring in more experienced right back than Trent and Joe Gomez, but they can do a good job in the first season.

Left back position was the main issue in the recent seasons. Alberto Moreno's inability to defend, Liverpool really experienced problems on the left side. With the arrival of Andrew Robertson he should be your starting left back. You could cash on Alberto Moreno and sign a lot better rotation option. Joe Gomez could play on the left but he shouldn't be played there because you should have a better option than him on that side. Since Robertson is young too, you shouldn't look for top class, only if you think you could go better than Andy. This position isn't the main concern.

With arrival of Virgil van Dijk your defence is good and doesn't need any first-team players. Van Dijk is a top centre-back, Matip and Lovren will do the job in the first season, Ragnar Klavan is an experienced back-up and Joe Gomez is a great back-up as a young player too. You shouldn't spend too much money on this position since it's already stacked with good players.

Liverpool possess good depth in midfield, with the likes of Naby Keita joining in the next season. The captain Jordan Henderson and the vice captain James Milner should be your starting midfielders, who will do a great job there. Oxlade-Chamberlain should be your more attacking midfielder, with the likes of Adam Lallana coming off from an injury. You might want to get another young attacking-minded midfielder until Naby Keita joins. Emre Can and Georginio Wijnaldum will offer great rotation options.

Since Liverpool aren't using attacking midfielder we won't cover this topic, we will mainly look on the left and right side. Sadio Mane and Mohamed Salah should be your starting options no matter what. Liverpool doesn't have too much depth for this position with the likes of Phillipe Coutinho and Daniel Sturridge leaving the club. Oxlade-Chamberlain could be a good rotation option but depends if you wanna use him in the midfield or at the wing. You should look for some cheaper hot prospects to have an option if one of you main players gets injured.

Liverpool doesn't have the best of depth on this position. They have depth, but not quality depth. With Daniel Sturridge being loaned out ,Danny Ings and Rhian Brewster being injured, you are left with two young players who aren't good enough for the first season. Ben Woodburn and Dominic Solanke might be good in the future but you really should look for someone better and more experienced than them. You might want to sell Daniel Sturridge and Danny Ings while you can still make cash out of them and get yourself some better and more reliable rotation options. Roberto Firmino is more than competent enough to be your number 9.

Liverpool have a very good, promising and young squad, and you have a fantastic budget in the first season.

Your realistic aim should be top 4 finish, and that should be done with a little bit of work on the squad. The squad at the start is already good and a little bit of depth and change is all that you need. Trying to keep all of your players fit and rotating them should be your goal to the success. If you can stay consistent the whole season,there is no reason why you couldn't win the PL.

Your main objective should be top 4 finish, securing yourself CL for the next season, and the chairman will expect no less than that.