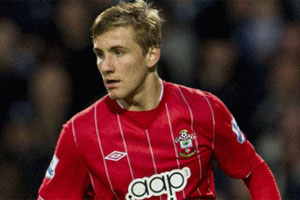 Luke Shaw may only be 17 years old, but he has already become a regular to the Premier League, one of the greatest leagues in the world, and been called a future England great. Shaw recently completed his first season in the Southampton first team at a professional level, but has already secured his place under both Nigel Adkins and Mauricio Pochettino. He has also received call ups to the England youth sides, with a possibility of a senior call up coming soon very likely.

Shaw began his career with Molesey Juniors, his local side, and was soon signed up by Southampton, at just eight years old. He has become an attacking left-back from a young age, and progressed through the Club’s youth ranks to become a regular for the First Team. Luke made rapid progress as a schoolboy, and was a regular for Jason Dodd’s Under-18 side from the age of 15. Luke was then called up to play for the England Under-16s at the Montaigu Tournament, where he also scored his first international goal.

Shaw was named for the first team at the age of just 16, in a Carling Cup game against Preston North End. Luke, alongside James Ward-Prowse, Callum Chambers and Jack Stephens, and played numerous times throughout the season, becoming a regular. Throughout the season, Luke managed to play for Southampton 28 times, including 25 league appearances. Over the season he received more and more praise for his performances, even at such a young age. His performances have made him become linked to the likes of Gareth Bale, who also started as an attacking left-back.

The youngster has been linked with multiple moves to big sides, with Arsenal, Chelsea and Manchester United all linked with the star. Arsenal have expressed their interest for a while, currently having England flop Kieran Gibbs, troubled Brazilian Andre Santos and new signing Monreal, lacking that young talent they will need in a few years. Shaw is a Chelsea fan, and links to the London side have flattered him, as a possible replacement for Ashley Cole. Ryan Bertrand would compete for the spot, but many feel Shaw would have the advantage. David Moyes also recently stated his views on Luke, saying that if Leighton Baines couldn’t be signed, he would immediately approach the Southampton star.

Many clubs have realised not only his current ability, but also his potential ability, and his key strengths. Shaw has become known as one of the fastest left-backs in the Premier League, often causing right wingers all types of terror throughout the game. At the start of the season, when Shaw was relatively unknown, many pundits and players bought him Shaw in interviews and discussions, as a great player with a bright future ahead of him, even seen when he had little experience on the big stage. As well as his tackling being seen as a strength, his crossing has also helped him get into and stay in the starting eleven for his club, with his dribbling also being above average even for a Premier League player of his age, meaning Shaw could be open to make the switch that changed the career of Gareth Bale, when moved to left-midfield rather than a left-back under the reign of Harry Redknapp.

He recently signed a new 5 year deal, early into his first season, after impressing Adkins, and keeping Southampton regular Danny Fox out of the side. Many Southampton fans were also impressed, and demanded Shaw started regularly, even complaining when Fox got the occasional start leaving Luke on the bench. He has become a fan favourite already, and if he wants to, could easily become a club legend. However, Southampton are known for their youth development, bringing through the likes of Gareth Bale, Theo Walcott, Alex Oxlade-Chamberlain, Wayne Bridge, Matt Le Tissier and even Alan Shearer.

Luke has been called one of the best English players on his generation, and has shone on the international stage, playing and scoring for both the England Under-16 and Under-17 sides. Shaw is hotly tipped to replace both Ashley Cole and Leighton Baines as the England left-back in the future, but with players only getting older. He is already valued at £10 million, but Southampton want to do everything possible to retain the services of Shaw for years to come. With the transfer rumours about Shaw flowing, it is likely many offers will be received for Shaw, but wherever he does end up to start next season, it is highly likely Shaw will be both stopping and tearing up the left-wing defensively and attacking throughout the year.

For Luke Shaw the future is certainly bright, and you can expect to see him playing for the top four in a few years time, unless his love for Southampton gets the better of him. Whatever happens though, Shaw is destined for success.