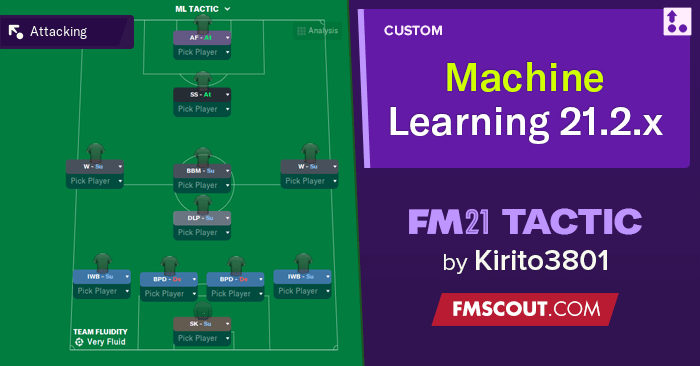 The idea of ​​creating such a tactic belongs, unfortunately, not to me, but to comrades from one well-known Korean site, but we all know perfectly well that they live mainly in their own world, in which there is a modified match engine. We should rely on what we have in stock.

Every person who has played FM at least once remembers these torments of creating their own tactics, and then the search for a so-called Holy Grail that will help to defeat any opponent with any formation, and preferably in a beautiful attacking style. And there are a lot of such tactics on the vast number of resources dedicated to our favorite game - for every taste and color, for any formation on the field and for any playing style. However, there must be a few details to the inherently winning tactics.

With this in mind, I have collected several (to be precise - 12) tactics that, when tested on FM Base, showed the best results relative to the current match engine (let's not forget that in version 21.2 it was slightly changed, so the tricks from version 21.1, and so more from the beta version no longer worked) in order to understand if there is something in common between them, which allows them to win the maximum number of matches. If we look from the other side - what things in tactics are the most vulnerable to AI in FM, if any.

These tactics scored more than 300 points in testing under special testing conditions (for those interested, I'll tell you more, but not within the framework of this post), so my choice fell on them. The list should have included variations of different tactics, but I deliberately abandoned them, since this would blur the training model and generate tactics as close as possible to the one whose training variations turned out to be the most.

Step three - tactical roles.
And here we have the first tactical findings to nullify AI efforts. 11 of the 12 tactics use BPD with defensive instructions as center-back pairs and IWBs with support functions on the flanks. Absolutely the same certainty with the striker and the central attacking midfielder - the advanced forward on the attack duty and the shadow striker are used by a little less than all the authors of successful tactics (some have no forwards at all, some are experimenting with the advanced playmaker, but our task is to find common features).

It gets a little more difficult when we move on to the defensive midfield area and the center / flanks of midfield, because each author has a different vision. Let me remind you that we need to place the defensive player, center midfield and two flank players here. Naturally, in search of the necessary tactical roles and instructions, we will turn to those tactics that use these positions. So, the defensive midfielder is used in 7 out of 12 tactics, in one of the seven it is Segundo Volante, so we discard this option, in the other six the opinions are equally divided between the DLP and the DM. A difficult task - you say, nothing of the kind - I will answer. In tactics with a DM, his tactical instructions differ, for a DLP there is only one instruction - support. Therefore, the choice has been made, let's move on.

Flank midfielders after solving this task are not a problem - in most cases, wingers are used, in most cases of using wingers they have the task of supporting, so everything is extremely simple here.

But the central midfielder is not a trivial task. The creative search of the creators of successful tactics led them into such a jungle that it was quite difficult to find at least some patterns, but by comparison, the only more or less suitable option was found - BBM with support functions.

Step four - tactical style.
We have figured out who will enter the field, now it's time to understand what they should do on the field. And here lies the largest portion of the setups that will not allow the AI ​​to oppose anything to you.

First of all, forget that FM promises to be able to play the way you want. Well, to play - yes, it is possible. But there is only one way to win. Anyone who says there are different ways to play transitions is, in fact, a hypocrite. Yes, you can, but all 12 successful tactics use only one transition model. And it, quite possibly, set your teeth on edge in the last issue of FM - counterpressing and counterattacking. You can download all these tactics and see if I'm right - if you want to win, you can't play any other way.

What else is definitely needed to win, and there is no other way to achieve it:

- offside trap
- the highest line of active pressing
- maximum pressing intensity
- interfere with a short throw by the goalkeeper (there is a logic in this, and now I will explain it - if earlier the avoidance of a short rally by the goalkeeper led to the fact that after a logical shooting out of the ball in such a situation, your CB or DM sent the ball with his head anywhere, just not to where it is necessary, and the use of such a tactical setting led to a huge number of quick counterattacks and goals of the opponent, but now this variant of ball distribution by the opposition goalkeeper is no longer so dangerous - the defenders have learned to play with their heads in a 3D match)

- play out from defence
- never wasting time
- only low crosses
The use of these tactical instructions for the team, judging by their similarity in all successful tactics, provides a victory in 80 percent of matches, which is rather sad, because it does not give room for tactical thought. It turns out that you can play any football that you like. The question is that in order to win tournaments, have a decent career and not get kicked in the ass after half a season because of poor results - you have to play exactly the way that basically kills tactical search and realism, which are a magnitude higher in FM than in other AAA-projects dedicated to football.

The rest of the tactical instructions will be inside, so as not to clutter up the description of tactics with additional paragraphs. I will be ready to answer any questions regarding the various settings, why exactly they are, how the model calculated it - and so on.

Step five - testing and results.
For the test of tuned tactics, I chose quite a standard Liverpool.
The visual part is on screenshots below, I will describe the most important and interesting info in text:

PS 1: I did not set up the set pieces and instructions for the opponent in this tactic. Perhaps it is because of this that we lost a couple of matches, which in the future could give us a couple of cups.

PS 2: the tactics, quite possibly, will only suit the top clubs, or those who can at least approximately recreate one of the following football models - Klopp's pressing machine, Guardiola's possession monsters or the murderous counterattacks of Mourinho long time ago

PS 3: No one said that outsiders should quit playing football. If this material is interesting enough for you, I will try to do the same training on successful tactics for weak clubs and identify patterns that will help you exceed expectations.

PS 4: I'm Russian, so English is not my native language, so sorry if I've mistaken somewhere. Be free to ask and correct me 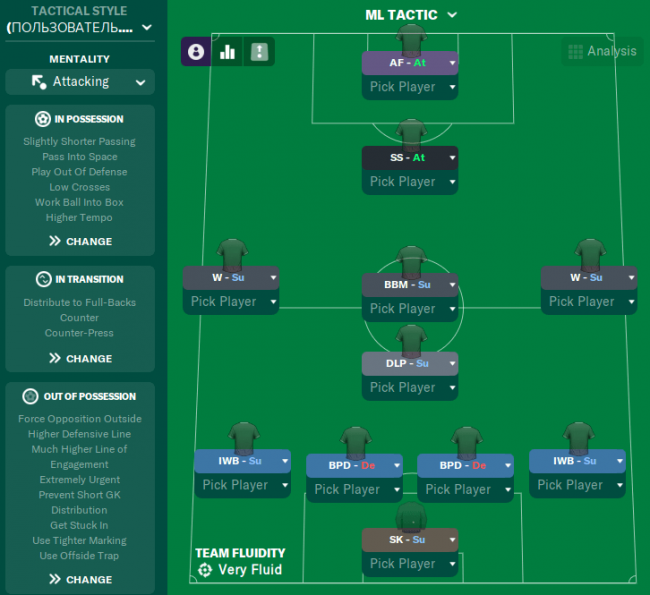