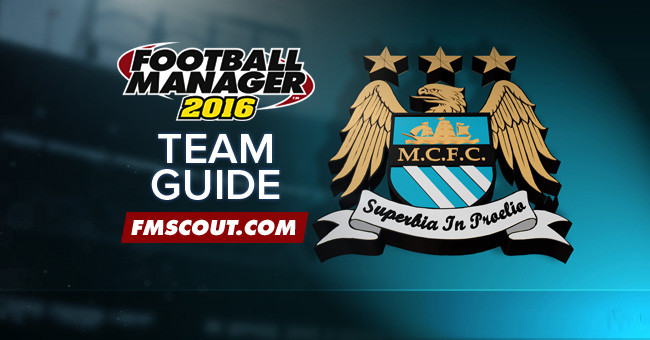 After their glory years of the 1950s and 60s, with the talents of Colin Bell, Mike Summerbee and Franny Lee among others Manchester City suffered what was the best part of 40 years of decline, the only team to win the English First Division and get relegated from it the next season. City were also the last team to be crowned champions with a starting eleven of only English players, having just one foreigner in Scot Bobby Kennedy.

City slowly spiraled down the footballing ladder and finally succumb to relegation for English football's top flight in 1996, they went down to the Third Division in 1998 but managed a dramatic play off promotion after a late Paul Dickov equalizer and Nicky Weaver's penalty heroics. Another promotion followed but Joe Royle failed to keep City up in the 2000/01 of the Premier League and was replaced by the much loved Kevin Keegan who with the likes of Ali Benarbia, Shaun Goater, Eyal Berkovic and Stuart Pearce gave the City faithful one of their best seasons for a long while.

City managed to establish themselves as a lower mid table side until Sheikh Mansour's arrival meant that Thaksin Shinawatra's 12 month reign came to end amid rumours of money laundering within the club, as City were close to administration. Their first major honour in 35 years soon followed when the FA Cup returned to Manchester and then City's second league title in 44 years.

As the Manchester City establishes itself as a global brand there is a growing expectation on the club each year, and with another big spending summer which saw the talents of Raheem Sterling, Kevin de Bruyne, Nicolas Otamendi and Fabian Delph join the club the Citizens look once again to regain their Premier League crown and better their Round of 16 finish in the Champions League over the last two seasons.

Due to Financial Fair Play restrictions in the game the transfer budget remains at £0, you can try asking for more although it is unlikely that the board will bow to your request. The wage budget can be increased in your expectations or by asking the board. It is due to this that I would advise you to as the board to remove the philosophy of signing high profile players for the first team. As shown below; 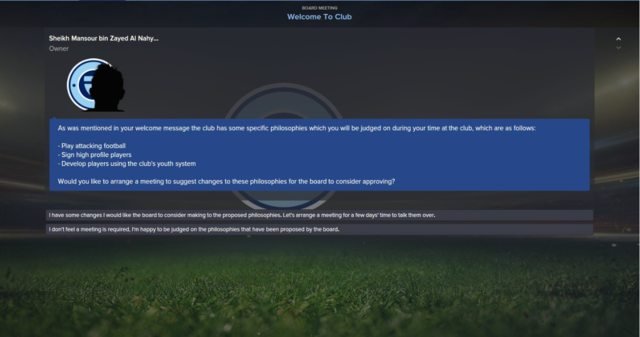 Here is your list of expectations and how your wage budget changes;

The media predicts a 2nd placed finish behind Chelsea in the table, and you have 5/2 odds of winning the title. The exact same as Chelsea, as seen below; 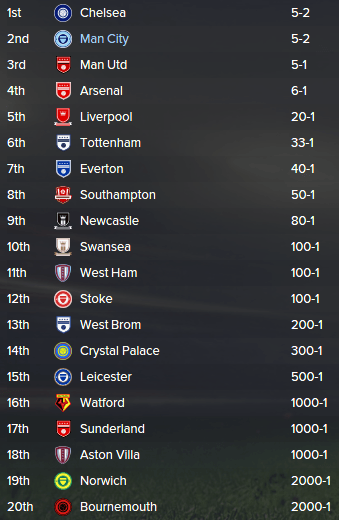 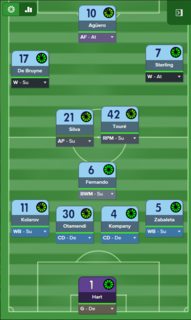 This first tactic is one I have found to be useful with most teams over this Football Manager and the previous version. The striker will drift wide and deeper as the wingers tuck in slightly, the defensive midfielder will sit much deeper than the rest of the team like a centre back. This allows the central midfielders to push much further forward, acting almost as attacking midfielders as they push forward. The high line pushes the opposition back, condensing them with attacking force. This tactic can be prone to yellow cards and counter attacking goals though, so it would be wise to watch your card count and turn off the ''get stuck in'' command every now and then. 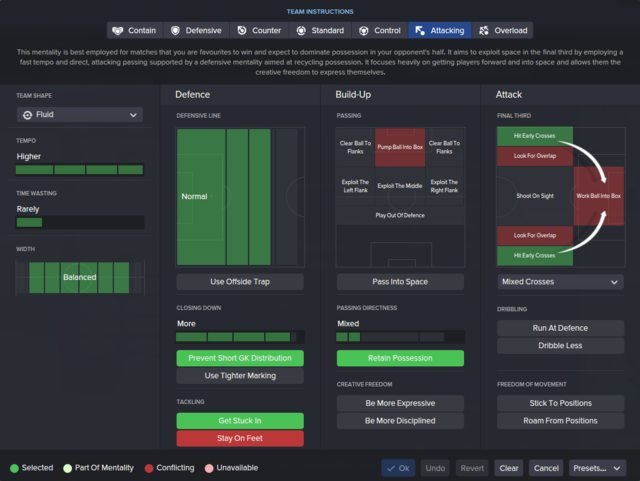 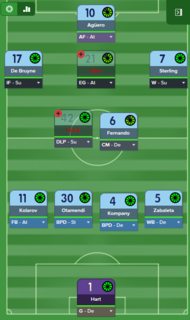 The next I have is a standard 4-2-3-1, which aims to get the best out of Sergio Aguero. With a heavily possession based style, with the basic aim to soak up opposition pressure and then wear them down with patient passing, whilst mixing in a few counter attacks. The left side will push further up with Aleksandar Kolarov of Gael Clichy often overlapping and Pablo Zabaleta or Bacary Sagna sitting deeper and letting Raheem Sterling or Jesus Navas do most of the attacking on the right. David Silva drops into a deeper role closer to the left. Fernando will sit much deeper, again being the anchor man in midfield, with Yaya Toure being the main distributor of the ball. The flanks are used a lot, so good wide players are important. 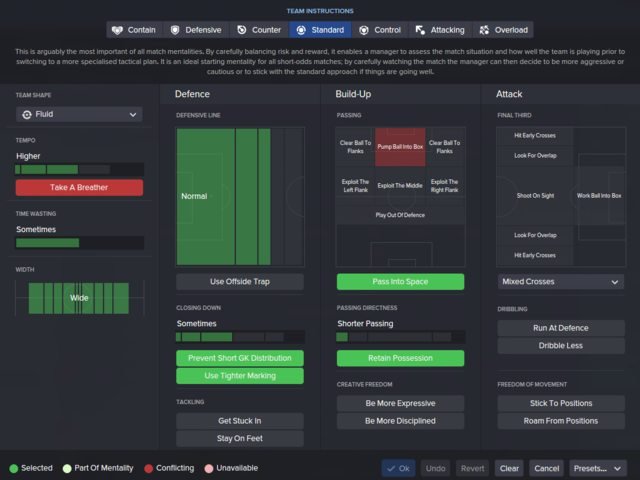 With a world class squad Manchester City is a club with no shortage of quality. But there are weaknesses, here is the positional analysis for the default first team squad;

Goalkeepers
Joe Hart is of course a fantastic keeper, and is and easy first choice. Willy Caballero is fairly solid backup, but should have a transfer offer from Fiorentina.

Whether you choose to accept this is up to you, but due to the lack of good goalkeepers in the reserve I would recommend signing of Geronimo Rulli in January of your first season for free due to his contract expiring in the summer of 2016. Or you could sign Predgrag Rajkovic of Maccabi Tel-Aviv, I advise you to loan him back to his club due to him not being able to qualify for a work permit.


Defenders
The defence is solid, but old. Especially in the full back position. With Pablo Zabaleta, Bacary Sagna, Gael Clichy and Aleksandar Kolarov all 29 or older it's worth looking at some younger full backs for the future. Sagna is good for at least a season, and Zabaleta for two or three.

Eric Dier is a great option if you can afford him, he also ups the English quota in the squad. A good alternative to Dier is Leeds' Sam Byram, who is another good young option who is also English and is a snip at just £7,000,000 (but if you choose not to include a loan back to Leeds until the end of the season you may have to pay slightly more). A great left back option is Tottenham's Danny Rose, another Englishman who is fairly young (25) and a player who I have found personally to be a brilliant left back this year and you can get him for as little as £12,500,000. A slightly cheaper option is Mattia de Sciglio, but you'll have to act fast in order to sign as he's usually snapped up by one of the bigger clubs quickly, you can sign him for around £9,000,000.

The centre back area is one of great strength for City, with one of the world's best defenders in Vincent Kompany, Nicolas Otamendi who is well equipped to go straight into the team, Eliaquim Mangala who can become at least a good squad player and Martin Demichelis who should be good backup for a season or two.

As well as the current first team crop there is Cameron Humphreys, Jason Denayer and Tosin Adarabioyo for the future, another centre back to look out for at River Plate is Emmanuel Mammana, who is available for around £4,000,000 in the first season and can develop into on of the world's best centre backs in FM16.


Midfielders
With Yaya Toure, Fernandinho, Fernando Reges, Fabian Delph, Bruno Zuculini, David Silva and Kevin de Bruyne already in the first team squad, there is no shortage of quality in City's first team engine room. You may choose to sell on some of these players, you should get an offer from Paris Saint Germain for Fernando in your first season. They will go as high as a non negotiable offer of £21,500,000 of course whether you accept is up to you. In terms of bringing players in there isn't a real need to buy, what with the likes of Manu Garcia, Olivier Ntcham and Sinan Bytyqi in the reserve team and Brahim Diaz in the under 18s as well Toure and Fernandinho (32 and 30 respectively) still able to play another two seasons as regulars.


Wingers
The flanks are a hit and miss area, Raheem Sterling is fantastic mostly and Jesus Navas provides good competition on the right also. Kevin de Bruyne also provides moments of magic but can go missing at times. Due to the fact that there is also Kevin de Bruyne and David Silva in his position and he is valued at £32,500,000 at the start of the save, has interest from Real Madrid, and if you transfer list him Liverpool, as well as being 28 years old Samir Nasri is a good source of money if you can get a bid for him.

Brandon Barker can become a great winger so keep an eye on him in your Under 21s team, but other than him there is little quality in the youth teams on the winger front.

If you can raise enough money then Domenico Berardi of Sassuolo is a great buy and at 21 is good for the future and Borussia Dortmund's Marco Reus is another quality option who can often become unhappy at Borussia Dortmund do to not playing in the Champions League.


Strikers
Any position with Sergio Aguero in is going to be strong, add to this Wilfried Bony and you have to quality frontman. But with only two strikers (three if you count Kelechi Iheanacho from the Under 21s team) it would be a good idea to look around for one more striker who can play backup.

Two good options are Charlie Austin (available for £10,500,000 in the first season or for free in January if you're prepared to wait until the second season and sign him on a pre contract. As mentioned above Domenico Berardi is a fantastic player this year and is also natural in the striker position. Enes Unal is also good when he returns from his two season loan at Genk, Stevan Jovetic may also take your fancy when he returns from his loan at Inter Milan the same summer (2017).

As mentioned earlier Kelechi Iheanacho is a brilliant prospect and Thierry Ambrose is another good frontman for the future along with Enes Unal.

As I hope you can see. Manchester City boasts more of a challenge than meets the eye, with a quality squad that you can improve by bringing in some younger players. Brilliant youth facilities, some rather great prospects and players you can sell on to generate funds.

There's plenty to do to make your Manchester City save fun and challenging, I hope this article gave you some good advice for a save with City.

Can you become the dominant force in English football?

Renown for writing stories that only last 2 pages.