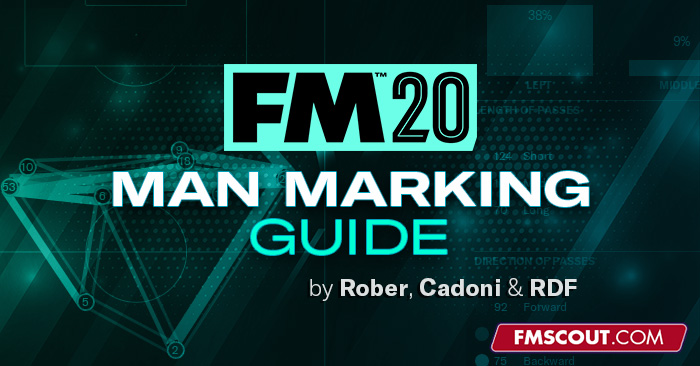 Hope you liked the training guide, we are back again this time with a man marking guide.

This story began a month ago or so, when fooling around with man marking and finding some strange results.

I think maybe it was Cadoni who started it, and the rest of us built on that and we worked together to test and find out what worked best.

So far we have come up with two types of approaches, but both are built around taking out the AI's deep playmaker, essentially cutting of the defenders target when they play out from the back. We are already using Knap tactics that are gegenpressing, and in both tactics we are using 3 players are already in this zone pressing the defenders. So this tops that pressure of, and what it does is make the defenders clear the ball, not being able to start the attack from behind.

This leads to your team winning the ball a lot, and dominating the game, while the AI struggle to create play. It does however somewhat rely on you to have, or get the right players for the marking to work, and if you can’t it’s probably the wrong player you are using.

In different tests Everton and Leicester won the league first season without signings, and in Germany the absolute worst team in the league Paderborn managed 4th and Champions league using this.


NB!
This approach needs you to work to find the player to mark before each game, as it shifts depending on their formation.
Now there are leagues and formations this works better for than others, a heavy underdog in LL might have problems doing this as well as a PL team, due to the fact that they play direct and are already planning to hoof the ball. It will however put more pressure one them in this situation, and make them miss the pass a lot.

But however with the right players and approach we found it can be incredibly useful.

We started with the Fire and Water 4321 p103, that has 2 AMCs and a AF. We used the left AMC to man mark by name (not position as not as effective), the AIs DMC.

This AMC needs to be aggressive, have stamina and work rate, anticipate well, and be brave and hopefully strong to win any duel.

The other approach is using the Fire and Water 23212 p104, that has two pressing forwards and a AMC. Here we use the left pressing forward to man mark by name the same DMC or the MC that is the one who is dropping down to get the ball.

This PF needs to be aggressive, strong, have stamina and workrate, be brave, and quick to get into pressure fast.

First let's take a look at how we set the marking: 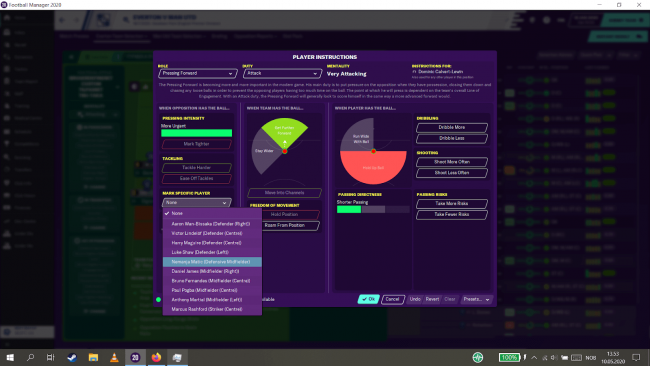 Here you can see that we set by name and not position.

So how do we find out who to mark? The opposition report and the analyst report pre game tells you so much info.

If they use a DMC it’s easy. Select him. If they use a midfield two or three, you will need to use the analysis section of pre-game like this:

The first page under the OI report tells you that when Bruno and Pogba are playing together it is Pogba who is DLP and lowest.

You can see that on the picture. 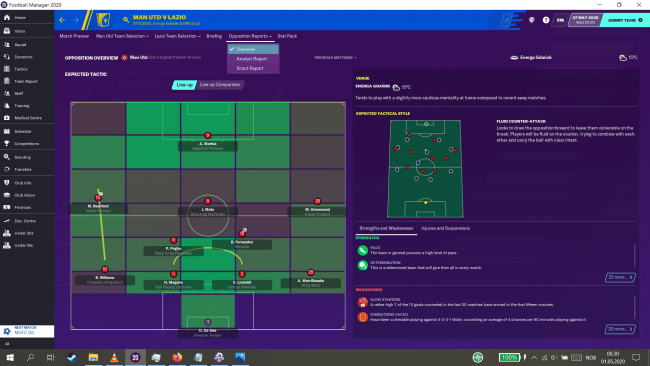 The second page shows you different things for the last three games, and some specific things for their last game. They might have used different roles and players, so look for the one that fits today's lineup as you see it where you put the man who shall be marked.

You have the passing network who shows you who all pass to most, and who gets the ball most. 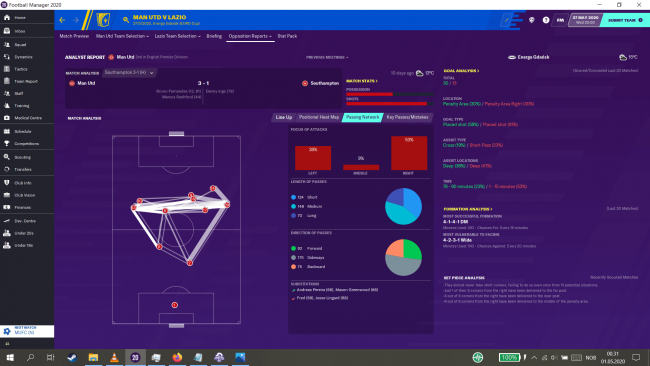 Next to that you have the positional heat map, this shows their normal position during games. Here it is very easy to see who is lowest of the midfielders. No picture as it is really self explanatory.

Next if you check the "team selection" of AI, it shows the last game. On that picture you see Fred playing, and as a dlp lower than Pogba. 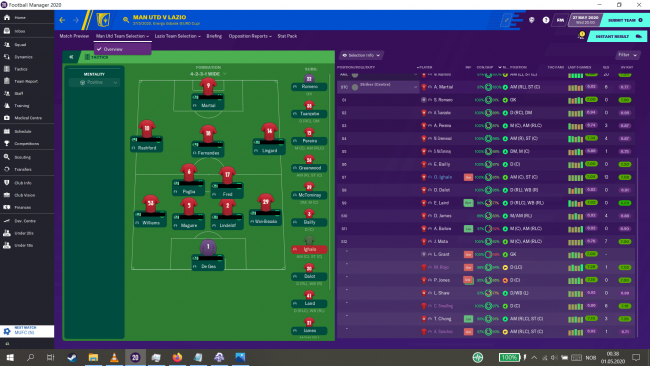 We now know some things.

If Bruno and Pogba are playing in a midfield two, then Pogba is the lowest of the two and should be marked. If Pogba and Fred are playing , Fred is the one lowest on the pitch and the one getting the ball from the defenders.

Then go back to marking, and see who is playing. Here it is Pogba and Bruno. 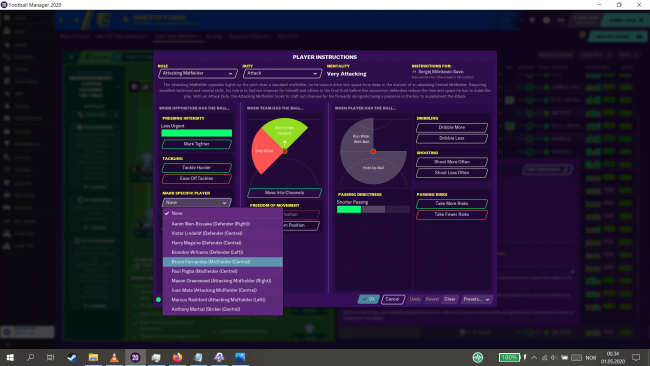 By now it is obvious to man mark the lowest MC, in this case Pogba, out of the game by using your closest AMC or PF if using 2 striker tactic.

This player will will have greater chance at success the better Pressing forward he is, and we have identified the abilities aggressivity, bravery, work rate, strength, acceleration, and pace as important to do a good job for the pressing forward tactic.

For the one with 2 amcs, we recommend they have some of the same stats to do a best possible job of pressing the one marked.

The rest of the Pressing forward abilities are also handy if can be had, based on your playing level.

You can check if it is working by checking key passes of marked player, as well as "touches" and possession in the report after the game. The one you are marking should have really low scores for these.

If you are still not sure, check their roles and their PMs, comes deep to get the ball and dictates tempo are ones we look for. If they play 2 mcs, one is a DLP and the other CM, it’s the DLP we want. If no DLP, you need to investigate a bit to find out.

Normally the types that drop deep are deep lying playmakers, ball winning midfielders if playing in central midfield. Any role a DMC has should be marked.

Some formations are harder than others, and I would encourage you to try out different things, maybe you will find your way of using this with your tactic, as we are sure this works in other formations as well.

As an extreme underdog we have marked up to four players and beating Liverpool.

Their DMC, both wing backs as they are important for their team, and also one of the 2 mcs in front of the dmc who might act as a 2nd playmaker. When doing this they were totally shut down.

Here are some results with the midfielder marked, and as you can see the team marking (Everton) is dominating the game in a remarkable way. 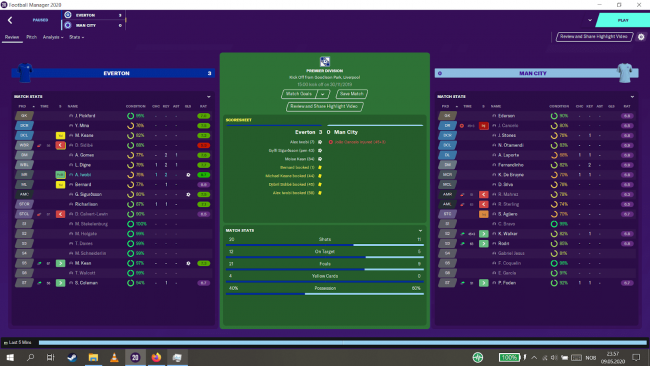 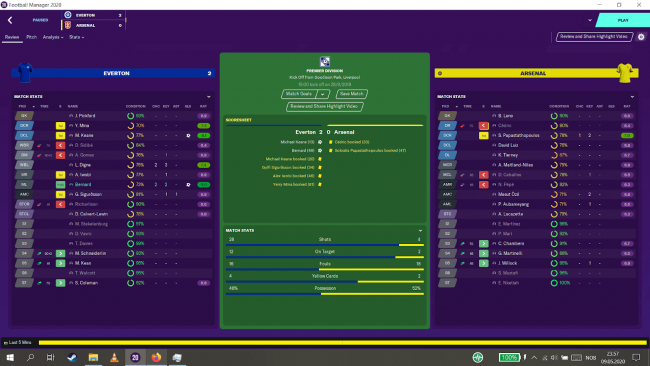 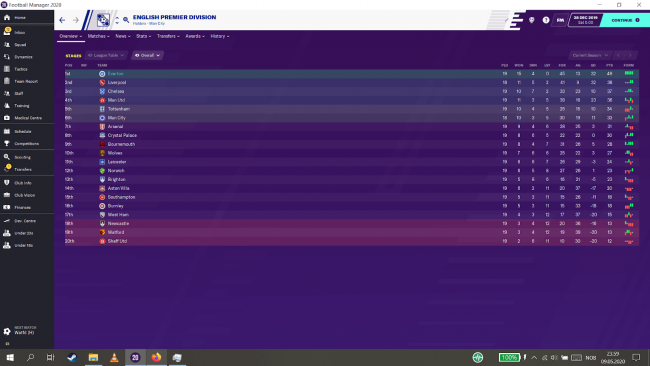 Here we see Evertons man marker getting almost as many tackles won, and more attempts than the Everton CBs. This of course does not take into effect the insane amount of times the defenders just clear the ball right to us because of his and the others pressure. 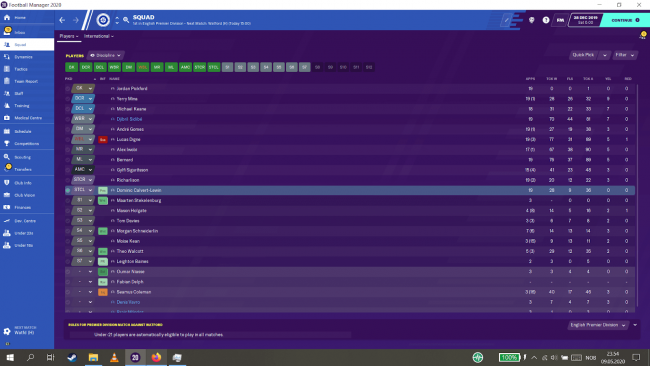 This is one way of getting results, and there might be others that work better for your team, your squad or your level. Still we found great results with this, and wanted to share them with you.