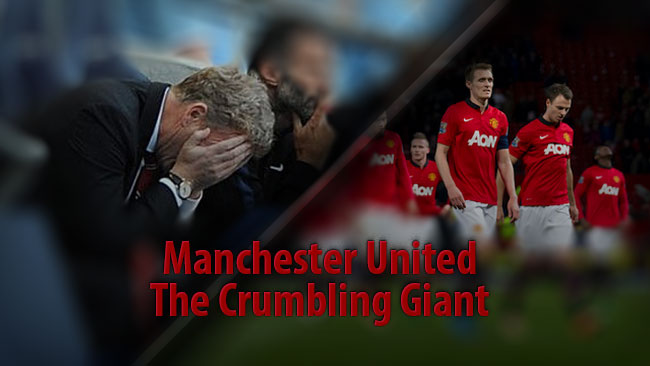 The 8th of May 2013, a day which changed football forever. Sir Alex Ferguson announced his retirement from management after may successful years in charge of Manchester United.

His successor was Everton manager and good friend David Moyes, a man with hardly any experience in the Champions League and a man without any trophies in his 11 year reign at Everton.

With Sir Alex Ferguson retiring and many clubs strengthening their squads, this would make the most interesting Premier League season for a long time, but not for fans of Manchester United...

Half way through the season on towards mid February, Manchester United are 16 points behind the league leaders Chelsea, and are knocked out of every cup except the Champions League. Moyes in under heavy pressure and club captain Nemanja Vidić is leaving at the end of the season, what's gone wrong for the champions?


As a Manchester United fan, the summer transfer window was a very stressful time. We were linked with many players that would really add something to our team and we came out the window with a 'panic buy' by the name of Marouane Fellaini, who hasn't been good at all this season.

When Sir Alex Ferguson retired, lets be honest, he didn't leave the best of teams for David Moyes, and with Manchester United doing lots of business in the summer, United fans everywhere were crying out for new players.

In January, we got Juan Mata, and I really rate Mata, he's a player with great ability, but still, its not enough, our team just isn't good enough and we really need to bolster in the summer.


In our team, we have some top quality players, Wayne Rooney, Robin van Persie, Juan Mata, Michael Carrick, Nemanja Vidić and David de Gea, however apart from them, the rest of our team is either not in good form or just damn right crap.

Where to begin, Tom Cleverley... I could go on and on about how bad he is. He isn't creative, he can't score goals, he can't defend, he is that bad even some of the under 21's are better than him.
He complains that he's been 'targeted' by Manchester United fans who give abuse, and states:
"My job goes under the radar at times. I am not a player who's going to beat three or four people and stick it in the top corner or go round tackling people like Roy Keane."
So what does he bring to the team then? NOTHING.

Who next... Antonio Valencia. Yeah, some days he can be really good, other days he can be pretty sh*t, but this season above all, he's been appalling.
He has pace but he can't cross, shoot, he even can't pass with his left foot! His crossing accuracy is 25%! He needs to go.

Patrice Evra is my final player to criticize, he's been very good for us these last few seasons but he's really struggling this season, he is quite good going forward, but defensively, he's pretty much useless.

The Choice of Manager


As a Manchester United fan, I wanted Jose Mourinho to be our new manager, as he has experience and trophies under his belt and knows how to manager a top team, however with David Moyes, I don't agree with his tactics at all.

He plays Mata and Kagawa on the wings rather than in the middle, he plays Rooney so deep he might as well be a centre half, he has no clue.

People say 'Give Moyes a chance'. We've done that, and our results are getting progressively WORSE, Moyes really needs to go, as he's breaking all the wrong records, and we need to keep hold of our best players as they might no be around much longer without the Champions League.