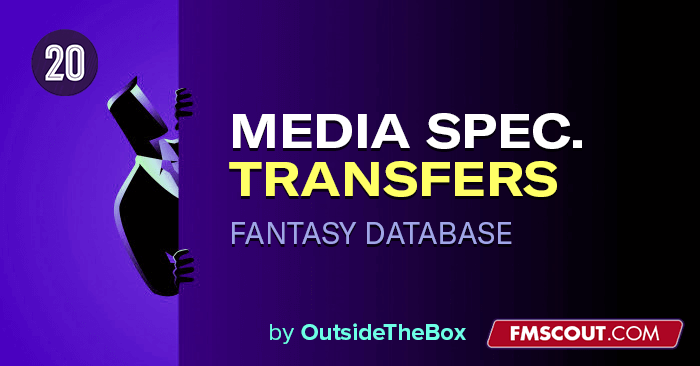 Every year I spend a weekend on the editor when I get bored of Football Manager. This year I thought I would make it available for everyone, in case during this difficult time, anyone is looking for a different sort of database to have fun in. I make transfers based on what I’ve read or heard (typically UK media), I think of what would make sense for example if Team A buys player X from Team B, Team B replaces the player with player Y, I throw in some randomness and I look at every player from the top price to about £7.5m (transferring some but definitely not all of these players). I update finances to give some clubs some more money, in case of any imbalances I’ve caused, because I am in no way taking this overly seriously. This might cause financial fair-play issues, I try avoiding this, but if it happens, I guess it can add to the fun!

Here are some notable (but not all) transfers. I will not be taking requests, because this is just a one-time thing for my own enjoyment that I thought I would share with the community.

Barcelona re-signed Neymar with money they made selling Coutinho to Chelsea and Griezmann to PSG. They also resigned Thiago from Bayern Munich, Oyarzabal from Sociedad and Jonathan David from Gent. Rakitic moved to Milan and Neto moved to Schalke replacing the Bayern bound Nubel.
Real Madrid made major investments in their squad, signing both Mbappe from PSG as well as Pogba and David De Gea from Manchester United. Gareth Bale left the squad for David Beckham’s Inter Miami, James Rodriguez left to join up with Ancelotti at Everton, Modric left for Juventus, while Bayern signed Isco and their former player Kroos. They’ve got a serious squad now with a lot of stars which will take a lot of balancing and could be a lot of fun looking to challenge for the Champions League over and over.

Atletico signed Mahrez (Manchester City), Castillejo (on loan: Milan), Bennacer (Internazionale), Allan (Napoli) and Luiz Felipe (Lazio). Valencia signed Hysaj (Napoli), Suso (Milan) and Vecino (Internazionale). Sevilla signed Mata (Manchester United) and Pastore (on loan: Roma). Athletic Club resigned Javi Martinez from Bayern. Sociedad brought Kepa on loan from Chelsea and have an extra £60m in their transfer budget (£72m total) due to the sale of Oyarzabal to Barcelona. Real Betis brought in Roberto Pereyra (Watford), Banega (Sevilla) and Romeu (Southampton). These are just some of the major La Liga transfers and there’s certainly a few more in there if you want to explore for yourself.

In the English Premier League, there is some massive changes. The big story lately is the Newcastle United takeover. They have an £82m transfer budget, I’ve given them a new owner, a sugar daddy and I have replaced Steve Bruce with Massimiliano Allegri who was linked to the club in the last few days. They have already made some major signings, Fabian (Napoli), Fekir (Betis), Mertens (Napoli), Danny Rose (Tottenham) and Morelos (Rangers). I have left the backroom the same, so it might be interesting to see what Allegri changes in terms of staff, which players he brings in and how far Newcastle go in a few seasons time. Some big signings but nothing blockbuster like Mbappe, because these takeovers usually have the club progress one step at a time and I’m sure they’ll get to that stage eventually.

Elsewhere in the premier league Arsenal bought James Maddison (Leicester), Calhanoglu (Milan), Sule (Bayern) and Demiral (Juventus). They also sold Aubameyang (Monaco), Ozil (Fenerbahce), Xhaka (Leverkusen), Mkhitaryan (Roma). They also have a bit more money to spend for you to get their attackers up to scratch with £80m.

Liverpool sold Lallana and Grujic to Southampton, Lovren moved to Napoli, Shaqiri moved to West Ham, Milner moved to his boyhood club Leeds and Origi moved to Roma. However, they finally got Timo Werner. They are a little short in certain areas of the squad but have a £98m transfer budget to bring them up to speed once again.

Manchester United lost Pogba and De Gea to Madrid, Smalling moved to Crystal Palace, Chong moved to Juventus, Mata moved to Sevilla, Alexis went on loan to Jiangsu Suning and Angel Gomes was snapped up by Benfica. However they made significant changes to the squad, signing Onana (Ajax), Milinkovic-Savic (Lazio), Havertz (Leverkusen) and Sancho (Dortmund).

Manchester City signed Upamecano (Leipzig) and Ake (Bournemouth), after the sale of John Stones (West Ham) and Otamendi (Milan). Lauturo Martinez (Internazionale) replaced the departing Aguero (Independiente) and they brought in Pellegrini (Roma) for more depth in midfield. They also sold Mahrez (Atletico Madrid) and Mendy (PSG), leaving gaps in the squad that need filled. This is certainly an interesting challenge for anyone looking to keep City challenging for every trophy available.

This is just a taste of what I did with two leagues. There’s a lot more changes than this in the database across Europe’s top 5 leagues and some more in others (not many).

Here are some more interesting transfers:

This is just some of the changes, which should refresh FM a bit and make things a bit more exciting if it’s become mundane. It’s only for a bit of fun and something I do every year myself, so it’s not perfect, things that might not ever happen are done for a bit of fun and I won’t be taking requests or making changes unless the database is totally broken. I probably won't do this again next year, but with everyone at home given the current crisis I thought I would share it this year.

Hope whoever downloads it enjoys.