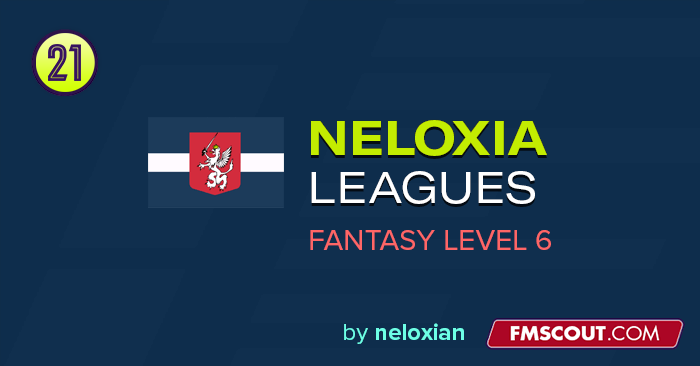 Back again for FM21, Neloxia is a nation based in Europe designed to become a world football power in short order. Lots of clubs aimed to help you buy the world's best talent or manage the country slowly. Be sure to select "add players to playable teams" There are six playable tiers in this country's pyramid.

Neloxia is a fictional nation based in Europe with its own cities, polygot cultures and an extensive football universe for you to play in.

Some of the quirks of Neloxian football:

Added a new 2nd division called the LigaElite, the old LigaExcel is now the 3rd division!
Top two divisions play with 5 point wins, 2 pt for a draw. Makes for a competitive title fight.
Bottom 3 automatically relegated from Ligapremier. 12th-15th place play a relegation playoff for the 4th relegation spot. Can't coast in this league! Gotta fight to win every game!
Baltic Champions League (Champ & Cup winners from Baltic countries play for some $ and bragging rights. Will quickly become a fun event for your club when you flame out of the Europa League!)
All African & Caribbean countries players are considered non-foreign, but it doesn't matter as there are no matchday or registration rules, except for the FA Cup.
That's about it. It plays nice with other nation files (except Gibraltar, lol) and is especially fun if you play with other mods that improve youth intake