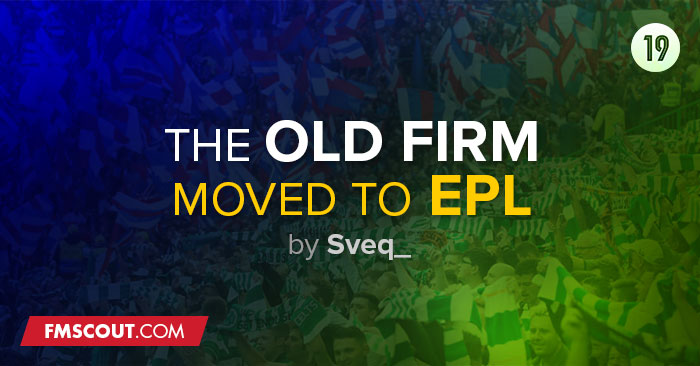 Sveq's Old Firm to the Premier League for FM19

Celtic and Rangers have now been added to the English Premier League.

To accommodate the two new Scottish clubs in the English football league system, two clubs from each tier in England have been moved down by 1 tier. The moved-down clubs were chosen based on their league standings from the 2017-18 season. More details in the Changelist below.

To compensate for the two missing clubs in the Scottish football league system, two clubs from each tier in Scotland have been moved up by 1 tier. The moved-up clubs were chosen based on their league standings from the 2017-18 season. More details in the Changelist below.

Celtic and Rangers will now compete in English domestic cups.

Celtic and Rangers will now represent England in the UEFA Champions League and UEFA Europa League.

The two newly available Scottish continental berths have been given to two new clubs based on the 2017-18 Scottish Premiership table disregarding Celtic and Rangers' standings.

Celtic and Rangers' transfer and wage budgets have also been massively increased based on their new Premier League earnings.

Sveq's Old Firm to the Premier League for FM19 Changelist

Note: Highland and Lowland leagues are now both missing 1 club each.

Discussion: Sveq's Old Firm to the Premier League for FM19