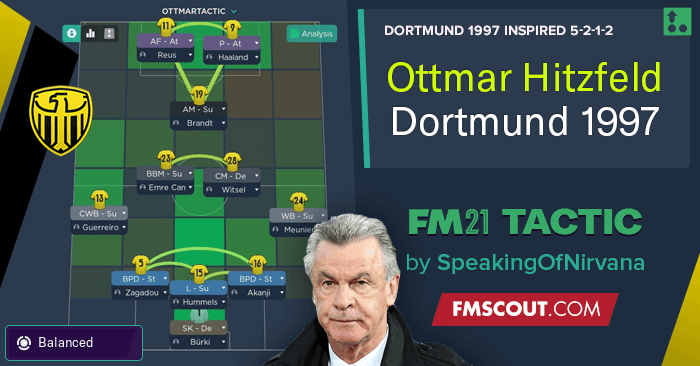 Following on from my last tactic i uploaded to this site "Rinus Michels - Total Football Ajax Inspired 3-4-3 Tactic", i wanted to try something different. I researched some famous football styles and also some underdog stories and i finally settled on trying to replicate Ottmar Hitzfelds 1996/97 Champions League winning side, beating a Juventus team coached by Marcello Lippi and also containing footballing legends such as Zidane, Deschamps, Del Piero and Vieri just to name a few. Hitzfeld, a.k.a "der General", during his coaching days was an absolute master. Every YouTube video and article i could find would be flooded with comments praising him, calling him a genius. So i looked into how his teams lined up...


The formation lined up during this season as a 5-2-1-2. That's 2 centre backs, one libero/sweeper, 2 wing backs, 2 midfield engines, a creative yet deadly attacking midfielder and 2 strikers up front. And this is exactly how i set my team to play. 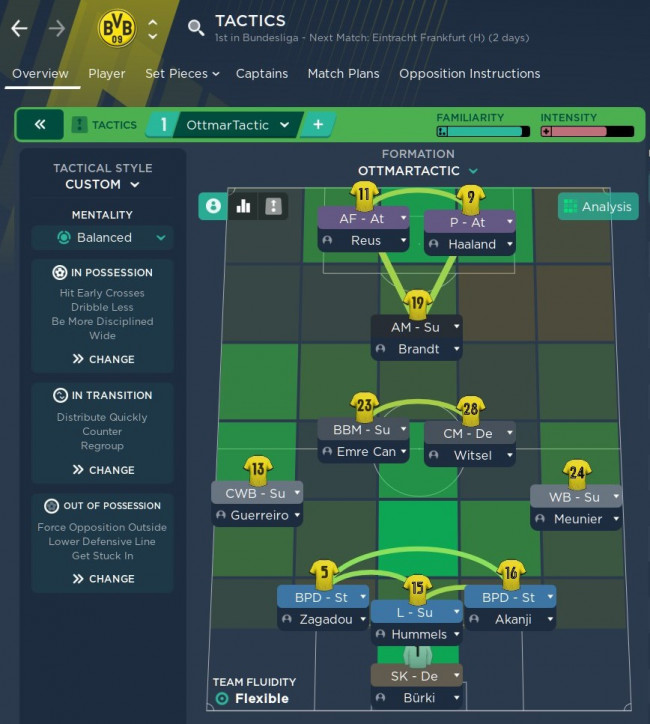 In a normal formation you could expect one of the strikers to be an out and out target man, but while Karl-Heinz Riedle was outstanding in the air, he only stood at 5'11. So for me the easy replica would be Håland. Yes i know that Erling is 5 inches taller than him, but trust me when i say, he certainly filled the German poachers boots. The left sided striker was Stéphane Chapuisat. Whilst researching i came across an article which read; "Far from the paciest of players, Chapuisat was an exceptional dribbler of the ball on his day and could bob and weave through defences at will". After reading this i knew new one thing for sure. Marco Reus was not going to be my playmaker. So up top we had Erling and Marco. The only difference between the strike partnerships was their preferred feet were the wrong way around!

My creative playmaker was my biggest issue. Andreas Möller was an absolutely outstanding footballer. The issues i had to face was if i used Brandt, who'd usually be most people's first choice, where would Sancho go? And then if i used Sancho, where would Brandt go? I didn't feel confident enough that i could successfully turn Brandt into a box-to-box midfielder, especially as his work rate was far too low and his technical were far too good to not be utilised. And Sancho wouldn't get a sniff at striker, not ahead of Reus and Håland. My first choice ended up being Julian Brandt. Which obviously upset Jadon and he did actually ask to leave in December. I promised to play him more and for the rest of the season i used them in rotation with each other, which made him happy again.

Wingbacks. Stefan Reuter and Jörg Heinrich were both such versatile players. They both could play full back, wing back, centre back and even defensive midfield. Luckily i already had two versatile wing backs in Meunier and Guerreiro. They both needed to be full of energy and work-rate as they were so important to this tactic. However, Dortmund in my opinion lack a good enough backup right wing back. So instead of buying a backup, i sold Thorgan Hazard, as the winger wouldn't fit into my team anyway, and brought in Danilo from Juventus for just £24m. He became my first option right wing back.

Jürgen Kohler, a world class (right) centre back. Playing for Bayern, Juventus and obviously Dortmund, he also collected 105 caps for the German national team. Known for being physically strong, excellent in the air and also adept at bringing the ball out of defence. I would've used Mats Hummels for this, but he had a more unique role to play. So Manuel Akanji filled this role, and with his great pace it felt as if he even added a new dimension to the role.

Martin Kree on the other hand wasn't as decorated, but was still a solid (left) centre back none-the-less. The option that made the most sense was French centre back Dan-Axel Zagadou. He actually became a key player a times, due to his height and jumping reach I'd have him mark the goalkeeper at set pieces, and occasionally the opposition keeper would spill the ball leading to an easy tap in for my strikers.

Finally, we have the Libero, or also commonly referred too as Sweeper. This role in Hitzfelds squad was filled by Matthias Sammer. As Mats Hummels had 19 composure and the best dribbling stat in my defence, it only made sense that he was built for this role. Due to the style of football we played with this tactic, he wasn't as important as he would've been in 1997. But still he made a decent impact.

Oh yeah, and make sure your keeper is good. Although he isn't a key member, this tactic does concede plenty of shots.


The important thing for me when editing the instructions, was simplicity. I didn't want us to do too much. Possession was not important to me. What was important was creating excellent chances and being absolutely clinical, whilst being defensively sound and compact. The back line played deep, and the wing backs and midfield pressed slightly higher up the pitch.

We'd hit teams on devastating counter attacks, and the excellence of our strikers did the rest. Our midfield doing most of the dirty work. Witsel, Can and Bellingham were in the top 20 in the league for tackles won (Bellingham especially impressive considering he only played 14 games all year). Danilo also joined them in that list but Raphaël Guerreiro didn't quite make it in the top 20. Once we won the ball back we'd counter quickly and direct. In the analyst report at the end of the season, it read "effective from through balls as 60 of a total of 114 assists in the last 50 games have come in that manner." The pace of the strikers getting in behind was a huge threat. 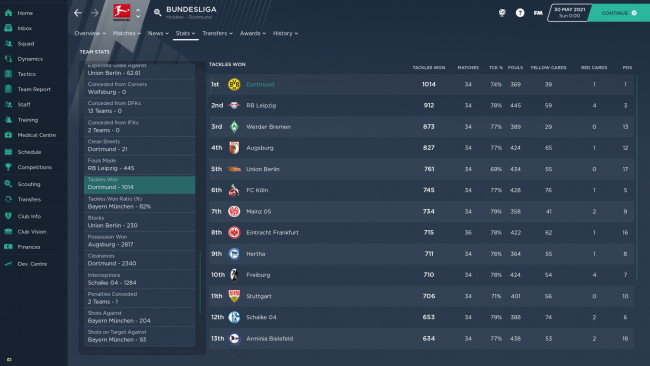 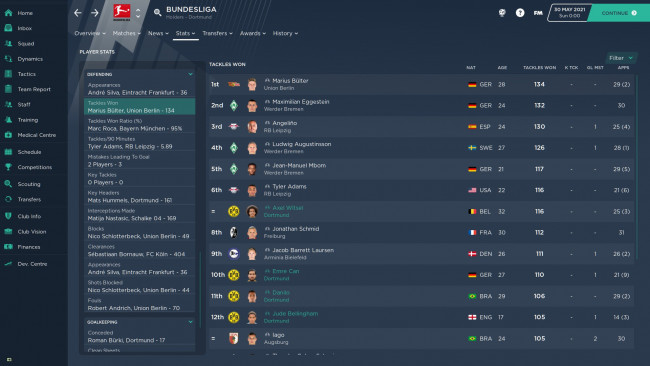 And we were always clinical. In the league, Håland scored 42 goals from 88 shots on target and 152 in total. Thats a conversion rate of about 27%. He was only bettered by Roland Sallai of Freiburg, who comparatively had 7 goals from 25 shots at 28% CR. Reus came joint 4th in the league with 12 goals from 54 shots, at 22% CR - same as Lewandowski. Meaning Erling was an entire 5% ahead of him! Our strikers were absolutely clinical, which was exactly was i was looking for. 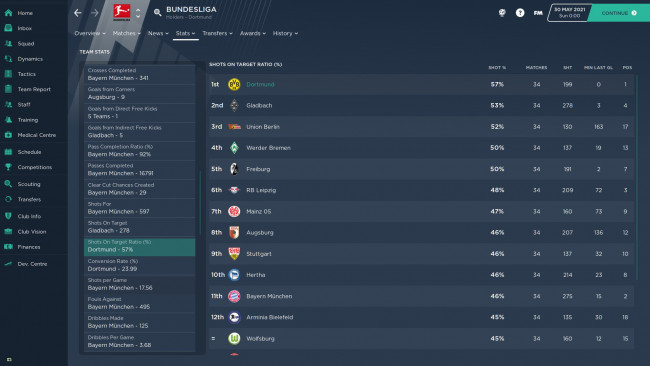 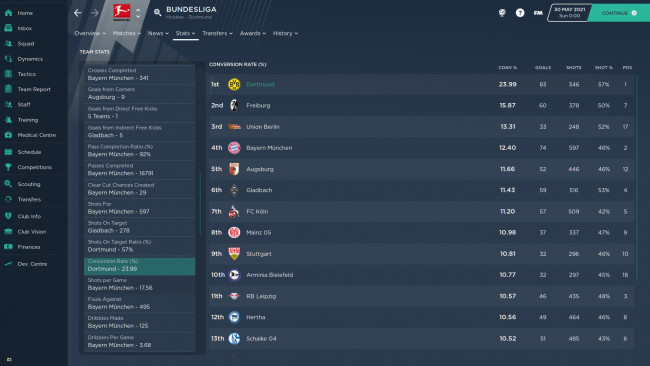 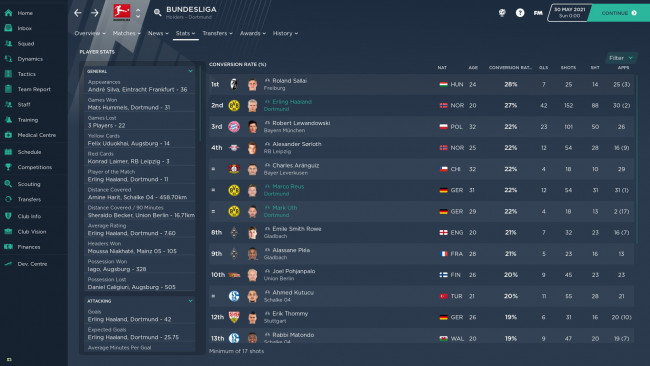 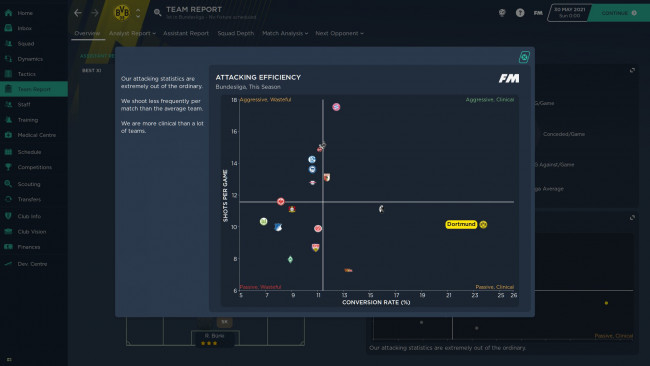 The wing backs also provided excellent numbers, in 25 league games Raphaël Guerreiro got 14 assists, whilst Danilo got 7 in 31 games. Meunier hit 2 goals and 6 assists in 30 games. I should add Raphaël was my set piece taker and we did score from a handful of corners and indirect freekicks. We conceded lots of shots, but due to great defensive positioning they were blocked more often than not. We ended the league campaign with just 17 goals conceded! Roman Bürki completed 20 clean sheets.

On the topic of set pieces, in Hitzfelds squad they also converted plenty from those situations. So i had the "play for set pieces" option on. I also added routines to freekicks and corners, and even a long throw in option. All 3 of which saw goals being made. 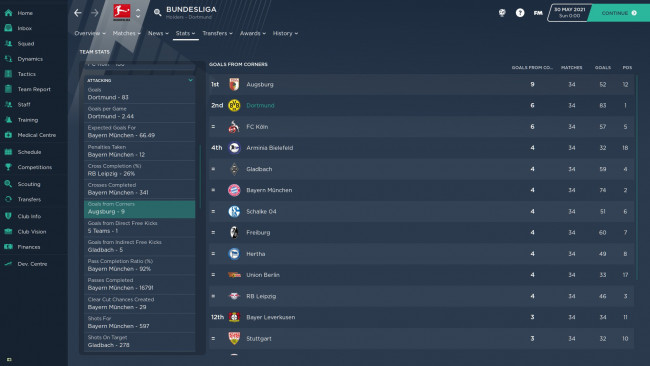 The MOST important thing for me, was to get tactical familiarity as high as possible during pre-season. Or you will get spanked early on in the campaign. As for opposition instructions i made sure all centre backs and full backs were pressed intensely to ensure we can win the ball back up the pitch. General training was left too the AssMan as i still haven't mastered it this year. But it didn't matter too much as we still managed to stay fit for most of the year and also build great Tac-Fam early on too.

Erling Håland ended the year with 67 goals in 47 games, collecting "FIFA Best Men's Player" and "FIFA FIFPro Player of the Year" awards. He even beat Gerd Müllers 40 goals in a single league campaign by 2 goals! A record that's stood for centuries. 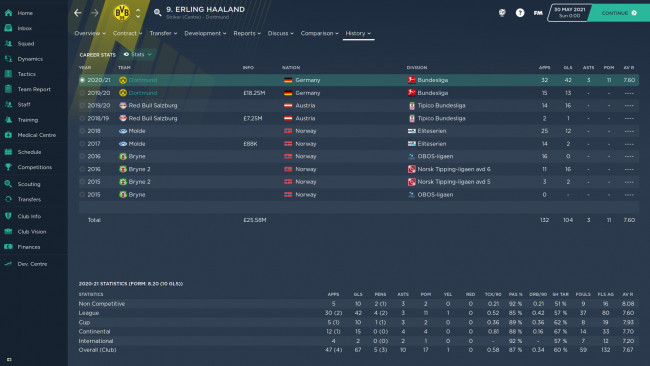 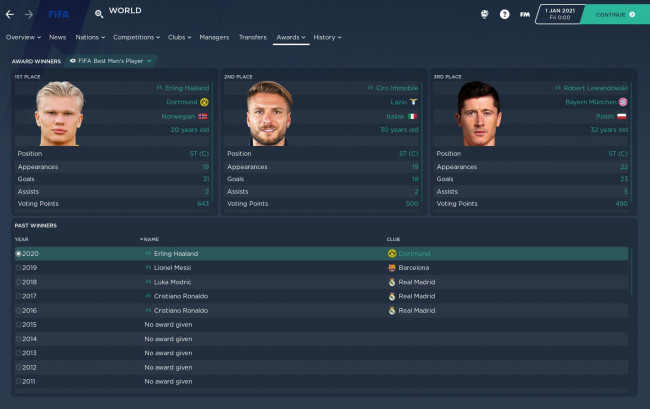 Brandt didn't have the creative explosion i was hoping for but contributed well none-the-less with 9 assists and 5 goals in 47 games (all comps). Sancho who didn't feature as much hit 4 goals and 6 assists in 21 games. Unfortunately Reinier played 3 times, so nothing to report, but Gio Reyna played 20 games scoring 2 and assisting 3 times.


To finish the league season we beat Bayer Leverkusen 4-2, ending the campaign on 96 points, with 83 goals scored and only 17 conceded.

In the champions league group stage we collected 14 points with 15 goals scored and 6 conceded. The group was fairly easy, containing Celtic, Atalanta and Zenit. First knockout round we drew Atletico Madrid, drawing 0-0 at the Wanda Metropolitano and winning 3-1 at the Signal Iduna. QF we drew Chelsea, and we lost 2-1 at Stamford Bridge (would just like to point out this was our first loss of the ENTIRE season, coming in April!) but fortunately we pulled it back in extra time winning 3-1 on the day and winning 4-3 on aggregate.

Semi final we drew Liverpool, and i thought for sure we were out but Liverpool had sacked Klopp earlier on in the season for poor league form, and had hired Michael O'Neill from Stoke (of all people they could hire) meaning they weren't quite the Gegenpress team you'd expect. We comfortably beat them at home 3-1 and also 1-2 at Anfield. Before we played the CL Final we had the DFB-Pokal final against Bayern which unfortunately we lost in extra time 4-3, only our second defeat of the season.

Finally, we met Manchester City in the CL Final and we managed to win in a another 4-3 thriller. Erling Braut Håland scoring an amazing hattrick in the final, meaning he ended his CL campaign on 15 goals, just 2 behind CR7s record. And that was the end of the year.

Just an added note, i did sign a few other players. I bought a really cheap Mark Uth as a Reus backup, who bagged 8 goals and 3 assists in 35 (31 sub) appearances. We loaned in Origi who spent most of the season injured, but still grabbed 5 goals and 1 assist in 19 (12 sub) games. Other than Danilo i finally brought in Socratis from Arsenal on loan as a backup and he only featured 16 (12 sub) times.

I wish anyone who uses this tactic the best of luck, and any improvements you make please post in the comments so others can find inspiration! Any feedback please let me know! Hope you all enjoy.