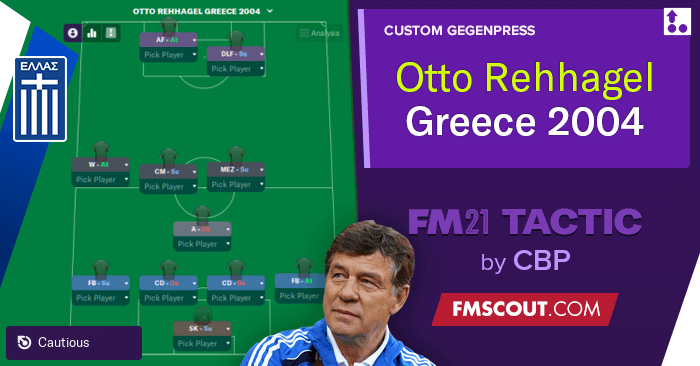 Deemed by many as the tactical achievement of the noughties, King "Otto" took Greece to the Euros in 2004 and to everyone's disbelief, they only went and won it.

This is my interpretation of it.

This Greece team was so well organised that Europe's elite couldn't break them down. They pulled off some amazing wins beating Portugal on their own turf in the final, as well as beating France and the Czech Republic. Greece only lost one game that tournament to Russia.

Now Greece didn't play the most attractive football, what they did was sit back and allow teams to attack them, but because of the defensive resilience, teams found it near impossible to break through. They conceded 4 goals in 6 games and only scored 7 but this team was hard working and determined.

This tactic is based on the shape and approach used for the final. Reading through some game analysis and comments of others and also watching a few clips on the good ole youtube. The shape is essentially a 442 with a modified midfield, they didnt play with a right midfielder instead relying on the right full back to provide width and energy on that side of the field.

The Shape and Approach 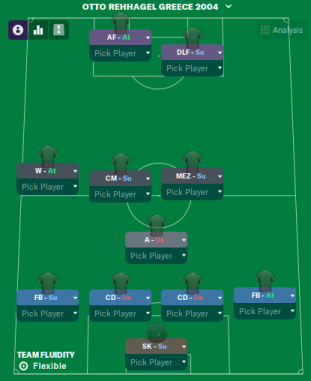 So as you can see there is no right midfielder however Zagorakis will venture out into the open space and help out the overlapping Seitaridis.

Some of you might be wondering why Charisteas isn’t down as a target man, well the analysis and reports show that he would often drop deep and just above the midfield to interlink the play before arriving in the box to power home a header, but he was also very good at harassing the full back so he has the player instruction to mark the opposition left back.

Fyssas has hold position as a player instruction, the reason for this was Otto would often rotate which full back got forward, one would go the other would stay and what this would often mean is that the the full back that stayed would sit narrower and pretty much create a back 3 with the DM also sitting relatively deep, just in front to create a “block of 4” and this could also be said about the midfield block so essentially you have 2 blocks of 4 that are playing very close to each other strangling the space behind and in between the lines.

The tactic has a lower line of engagement and lower defensive line, we want teams to come at us and try to break us down. Getting frustrated in the process and more than likely making a desperate pass which will hopefully lead us recovering the ball and breaking with speed and direct play, Greece were not known for their beautiful football, but the effectiveness of it. So because we were looking to soak up pressure and break with speed, I decided that a cautious mentality would be best suited

I ran a 1 season test with Liverpool and it went undefeated in the league with 32 wins and 6 draws, recorded the lowest amount of goals conceded, whilst also scoring the most. Salah returned 61 goals from the AF role. It got to the latter stages of the champions league and also to the final of the Carabao cup but failed miserably in the FA Cup.

Again this is an interpretation of how I see the tactic used.