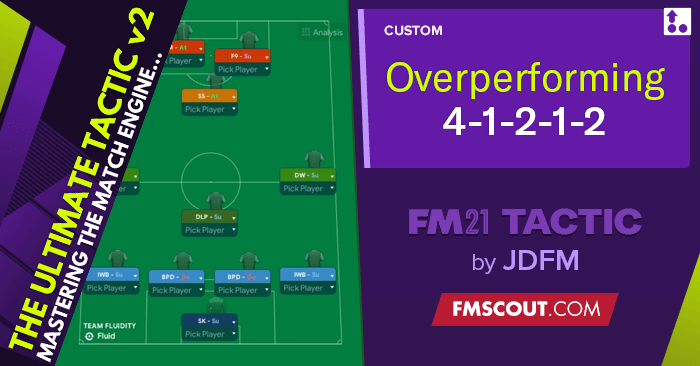 
I've fully tested this tactic out in a video of mine.

Initially gaining some incredible results in the Czech division, I decided to try it out with some teams in England.

Additional notes added: I have further tested this tactic in the Italian Spanich and French leagues - in literally every case it overperforms.

Firstly, there was Everton - a team who ALWAYS struggle in my FM saves. We got those up to 4th. In that sim West Brom were the team who came bottom, so we moved onto those.

We finished 6th with West Brom, scoring lots of goals in the process. Burnley were the team to finish bottom in that sim, so again we jumped onto that team.

Another 6th position! Goals galore and some pleasing set-piece figures. Bottom of the league this time, West Brom again! The team above those was Crystal Palace, let's see how it works with those...

4th position and an FA Cup victory, yielding incredible individual stats along the way. I'd proven that this tactic was suitable for the Premier League, now onto the Championship with bottom of the table Wycombe...

This one really impressed me, 5th place finish and the heartbreak of losing in the play-off final. Goals galore in the season and a team of overperforming players.


A simple 41212 on paper doesn't really paint a true picture.

I really wanted to get some Inverted Wingbacks operating successfully, and this works very well with those. They push into a midfield slot and support the lone DLP.

The width comes from the DW and they act as overpowered CWB's and really put in a shift.

Moving forward the trio of a SS, Trequartista and Target Man work marvelously well. The creativity of the treq and the steel and focus of the Target man work in harmony. I would say that the target man is the key position for this tactic.


Three key parts to this working;

1. Target man, set-pieces are set up to be a vital part of the tactic, get the right player in the right place and you'll do well

2. Player traits, whoever takes your throw-ins, train them to possess the long flat throw, you'll gain yourself 5-10 goals a season

3. GK distribution, give it to those IWB. They have many more options to distribute play than the CBs.

Good luck and i hope you get as much luck from the tactic as I have.

Further added notes: Take a look at my player traits video over on FM Scout, I detail some of the best player traits you can use for this tactic.