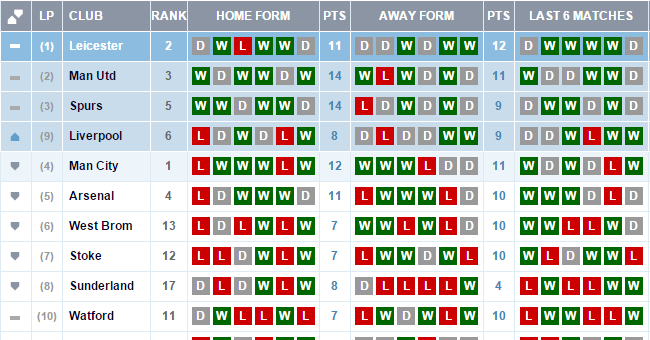 After 14 games of the new Premier League campaign, four points separate the top five sides in what is shaping up as a very close title race.

Manchester City and Leicester City are joint top on 29 points, with Manchester United, Arsenal and Tottenham all in hot pursuit.

When putting a bet on who will be top of the league come January 1 through your Matchbook, it is worth examining the five clubs’ fixtures over December - so who will be in top spot on the first day of 2016?

Currently on top spot on goal difference, Manuel Pellegrini’s side have a mix of games they should win and challenges on the road over the next month.

Although the Etihad Stadium club would expect to pick up maximum points in home fixtures against Swansea and Sunderland, trips to Stoke, Arsenal and Leicester represent tough proposals.

Presuming that City win their home games and the trip to Stoke, but potentially drop points against the Gunners and/or Foxes, there is every chance they could still be on top come 2016.

Claudio Ranieri’s men have been the surprise package of the campaign and show no signs of slowing down with another impressive performance against Manchester United at the weekend.

With Jamie Vardy’s goals continuing to fire the Foxes towards positive results, the King Power Stadium side should not be written off.

That said, Leicester arguably have the toughest fixture list over the next month, with away games at Swansea, Everton and Liverpool complemented by hosting Chelsea and City - a real test.

Louis van Gaal’s side have not been playing football to inspire the masses but remain in the hunt thanks to a stubborn rearguard.

At this stage in the club’s ongoing project, results seem more more important than the manner of performance.

The Old Trafford outfit will be looking at their next five fixtures and believe they can still be in the running come 2016, with home games against West Ham, Norwich and Chelsea split up by trips to Bournemouth and Stoke.

The Gunners have suffered stuttering form and debilitating injuries over recent weeks that threatens to derail their challenge, with the next month critical for Arsene Wenger’s side.

However on paper the North London side have an agreeable next month, with games at the Emirates Stadium against Sunderland, Manchester City and Bournemouth and winnable trips to Aston Villa and Southampton.

Despite Alexis Sanchez’s recent injury, expect Arsenal to be in the mix, maybe even top, come January 1.

The ultimate goal for Spurs will remain a spot in the top four, but a continuation of recent good form could well see them in the hunt for top spot come the new year.

Mauricio Pochettino’s young side take on West Brom, Southampton and Watford away from White Hart Lane while also hosting Norwich and Newcastle - an agreeable run.

Spurs should be in the top four come January 1, but top spot seems out of their reach.

Discussion: Premier League December 2015 Preview: Who Will Top The League on January 1?