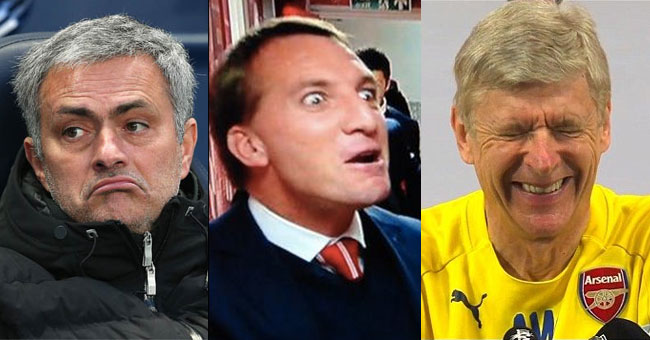 In their quest for immortality and fans' adulation, Football managers employ any number of techniques and strategies to gain the upper hand over their bitterest rivals. Much like the many tactics a poker player might utilise at the table when the stakes are high.

It's uncanny how some of today's leading lights in Premier League Football mirror the behaviour of a poker player. And indeed, many are!
Let's take a deeper look shall we?

*Note: Some of the following players may have left the table by time you read this

Arriving to much fanfare and making a scene to ensure the focus is on himself, is the Portuguese poker prince, Jose M.

Taking his place at the table, you can sense the unease among the other players already seated there. In part, because just about everyone here has had some kind of history with him but also as his mere presence at the table raises the odds considerably.

Sitting at the table with the biggest pile of chips, continually raising the stakes and watching those that can't keep up sweat it out against a bigger fish, he grins smugly while playing with an unlimited bankroll.

His bluster is buoyed by the fact that losing has little-to-no effect on his funds. His bankroll ensures he doesn’t need to employ mind tricks to win, but employ them he does anyway, just for the fun of it.

Jose doesn’t need a p-p-p-poker face, opponents know what he's thinking but can do little about it anyway as he is always in possession of the strongest hand. His aggressive playing style makes him few friends but does, inevitably, mean that more often than not he wins the pot.

His only weakness is his own arrogance. The mischief in him can't resist winding up his competitors. Armed with the ability to start a fight in an empty room it wouldn’t be long before chips are flying and competitors are tearing each other apart.

Meanwhile, he lights up a cigarette, flips up his hoody, places his shades neatly on his face, collects his chips and cashes out before coolly strolling away from the brawling carnage of the scrum taking place behind him where only moments earlier stood a table of cards.

Stopping only momentarily to berate a small lady doctor in the audience, he allows himself a wry smile, knowing his work for the evening is done. Outside, a parked bus is waiting.

The reverse bluffer typically gets it wrong. Maybe he doesn’t quite understand the best hands in the game, maybe he is simply a bit confused or out of his depth but either way, this is the guy who thinks he is laying down a royal flush that turns out to be a busted flush instead.

When the others laugh at his naivety, he is strangely unmoved and leaves the table in an oddly happy mood, knowing he'll be back next week with a revised tactical plan that, the others are only too aware, will be the same as the one that just lost him all his money. Never-the-less, Brendan whistles a merry tune as he is sent on his way from the table.

Brendan "the bluffer" Rodgers thinks he's a shark, a crafty ninja-like master of the cards but all too often his over confidence is exposed.

He talks a good game, but does little to justify his gusto, continually over estimating the value of his playing hand. Or knows it and plays anyway.

By playing this way, the Liverpool man creates profitable situation - for others. Perhaps he’s just one of the ‘fish’ that online poker players in the UK love to find (more about that here).

For our (reverse) bluffer, it has to be Brendan!

Depending on who you believe, Arsene can either afford all of the chips or none of them, all too often opting for merely some.
Maybe he is scared of the fight in his old age, simply not wishing to go toe-to-toe with younger, fresher blood. Maybe he is tight but, either way, he is increasingly reluctant to chance his luck financially which leaves him with a weaker hand than his followers might have hoped for.

Despite his waning eyesight, which can lead to him missing some of the key events on the game, he remains an undoubtedly skilled opponent and is definitely experienced. So experienced in fact, that he is beginning to look increasingly world weary and his hunger for the fight is not what it once was.

Not universally recognised for his sporting acceptance of defeat, upon losing he is likely to get up and leave the table in somewhat of a huff and, in a rage, it might slip his mind to forget to shake the hands of his vanquisher.

Weak or tight, this player will usually settle for what he's got and hope for the best.

Our low risk, low baller has to be Arsene.

Honourable mention goes out to:

Alan "the Selhurst shark" Pardew, who excels at getting under the skin of his opponents.
Big Sam "benefits" Allardyce, who employs 18th century tactics to win an 18th century game.

Discussion: What Kind Of Poker Players Would These Premier League Managers Make?