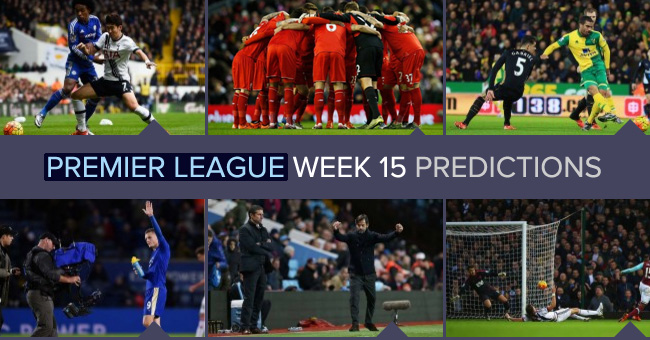 The 2015-16 Premier League season is heading into its busy winter period as we start the first weekend of games in December 2015.

It's the most open campaign in history with few journalists bold enough to make a prediction of who the eventual winner will be this season with only four points separating the top five, and Liverpool in sixth cannot be discounted.

It promises to continue to be an unpredictable season; much like a game of poker at your local casino (check some casino games out over at http://casinoservice.org/spilleautomater if you want to see what we're on about).

With that in mind, here is a look at some of the important matches this weekend:


The Premier League weekend kicks off at the Britannia Stadium on Saturday lunchtime as Stoke City entertain the leaders Manchester City.

Mark Hughes faces his former side with a team that were beaten 2-0 at Sunderland last weekend. Ryan Shawcross saw his marching honours in this game and will be suspended for the visit of City – a hugh blow.

Stoke have a good home recover of Manchester City in recent seasons but will do well to get anything from this game without Shawcross and as the league's lowest goalscorers.

Manchester City have David Silva back and Kevin De Bruyne is in fine form. They should be good enough to send a message to the rest of the league with three points this weekend.


Southampton have had a tough week – beaten 3-1 at Manchester City last weekend and humilated 6-1 at home by Liverpool in the Capital One Cup midweek.

Aston Villa offer them an easy three points to get the Saints back to winning ways; Remi Garde's side are winless in their last 13 Premier League matches and suffered a 4-0 thrashing at Everton in their last away match.

Last weekend Villa were beaten 2-3 at home by Watford. They only have one clean sheet since the opening day of the season and only Stoke City have scored fewer goals than them after 14 matches.

This should be a comfortable home win for Southampton who have Graziano Pelle back and with Jose Fonte as their only regular first-team player this season, doubtful.


Leicester showed they were no fluke in holding Manchester United to a draw last weekend, which sees Claudio Ranieri's side in second place in the table heading into this weekend's fixtures.

The future of Swansea City boss Garry Monk has come under heavy speculation for more than a month now following his side's poor form. The Swans have taken only one point from their last four games and are only four points above the drop zone.

Both of these sides play attractive football and Leicester City are one of only four teams in Europe's top five leagues to have scored in every game so far this season. This should be an exciting game with lots of goals.


Hapless Newcastle begin the weekend in the relegation zone facing one of the in-form teams in the Premier League's only Sunday game this weekend.

Liverpool have won three of their last four in the league and hammered Southampton 6-1 in the Capital One Cup midweek.

The Newcastle defence and team in general have not been very well organised this season, conceding a joint-league high 30 goals after 14 matches and with the worst goal difference in the league.

Jurgen Klopp's side should not only win this match but win it handsomely.