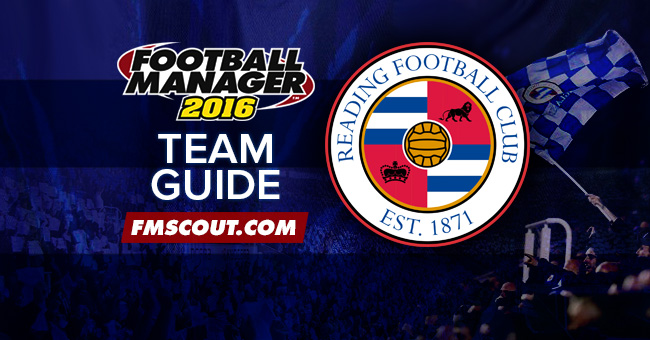 Founded in 1871, Reading are a professional English club currently playing in the Syk Bet Championship. Reading narrowly avoided relegation from the second English tier. The club play their home games at The Madejski Stadium and possess superb training facillities and great youth facillities. The club’s training ground is Hogwood Park where the youth teams play.

Reading won the English 2nd tier in 2006 and 2012 and finished runners-up once. The 2015–16 season saw the departures of long serving players Adam Federici to Bournemouth, Alex Pearce to Derby and Jem Karacan to Galatasaray but the arrivals Stephen Quinn and Paul McShane from Hull City, Orlando Sa from Legia Warsaw and Jonathan Bond from newly promoted premier league side Watford.

The summer spending did not stop there, with Ali Al Habsi joining from recently relegated League 1 side Wigan, Paolo Hurtado from Pacos de Ferreira as well as Andrew Taylor and Álex Fernández coming in on loan. The club then signed Lucas Piazon on a season long loan deal just before the deadline day signings of winger Ola John from Benfica and striker Matej Vydra from Watford, both signings were also season long loan deals. 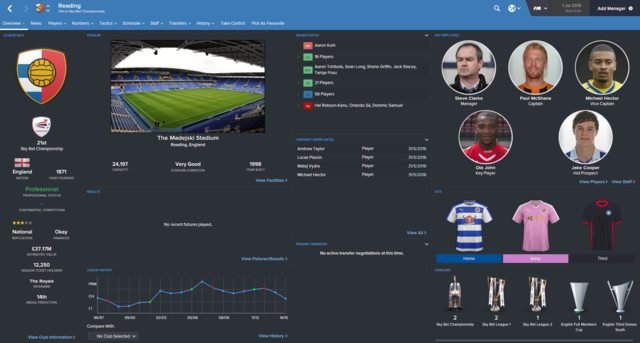 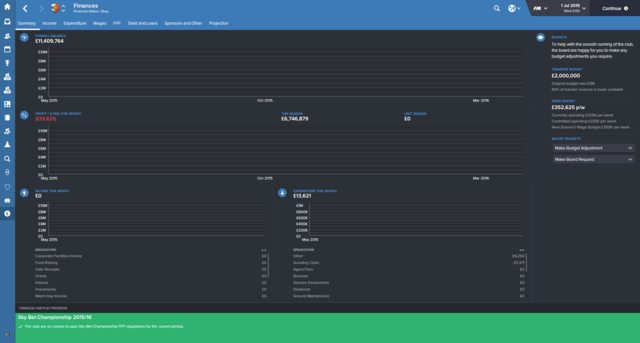 There are three different Transfer & Wage Budgets depending on expectations.

Media prediction is that they will finished the first season at 14th place in the league.

I chose 4-3-3 as the best formation with the default roster. There are two full backs, one limited defender and central dender. Formation includes three central midfielders with these roles – Ball Winning Midfielder, Deep Lying Playmaker and Box To Box Midfielder. There are also two wingers and False Nine. 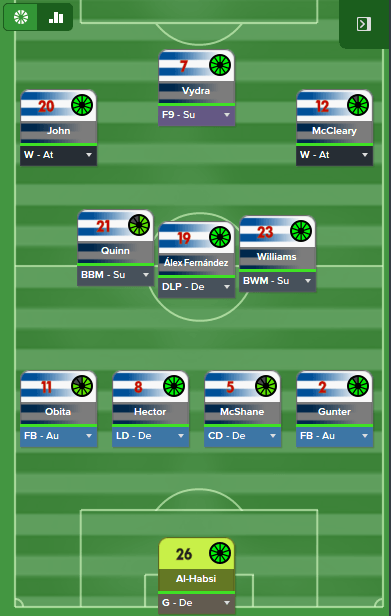 Goalkeeper:
The club had to sign some new goalkeepers after the departure of Federici and Andersen. Reading signed Jonathan Bond and Al-Habsi. They are almost at the same level but the first choice should be Al-Habsi (33 years old).

Full Backs:
Chris Gunter on the right side is the easiest choice because he is the only one typical right back in the team. You can choose from Jordan Obita and Andrew Taylor (on-loan) for the left side and I chose the younger player – Obita.

Central defenders:
The typical CD is Paul McShane, the new club captain. The other one is Michael Hector who signed for Chelsea and he is on-loan in Reading. His best role is Limited Defender so if you will play other player there you can change it to Central Defender role. But it is not necessary because the young prospect Jake Cooper is great with this role as well.

Central midfielders:
There are three different roles. Daniel Williams is great as a BWM with support duty, Álex Fernández is the best player for Deep Lying Playmaker role and Stephen Quinn as Box To Box Midfielder. If you can not play with Fernández you should play Norwood or Tshibola as a DLP.

Wingers:
You should play Garath McCleary on the right side because he is very fast and he has great technique and crosses. On the left side is the place for Ola John who is considered as a key player for the team at the start of the save. Nick Blackman, Paolo Hurtado, Lucas Piazón and Hal Robson-Kanu (injured) could play at these positions as well.

False Nine:
The best striker in the team is Matěj Vydra. Czech forward is on-loan in the club from Watford and his best role is False Nine. The potential replacements are Nick Blackman and Orlando Sá (injured) or Simon Cox. But the last one is not good enough in my eyes.

There are some very good young players in the squad which could be a very useful. For example – defender Shane Griffin, midfielders Tariqe Fosu and Liam Kelly and strikers Dominic Samuel, Harry Cardwell and Andrija Novakovich.

Other issue is that there are many players on-loan so you will have to make a decent amount of signings and changes after the first season.

There are very good players in the first team and talented young players in the youth teams or on-loan. This save could be very interesting because the board expectations are not really high and I’m sure that you could win a promotion place with this squad straight in the first season. The club's philosophy is "Develop players using the club's youth system" and if you love to play with young players this could be an ideal save for you.