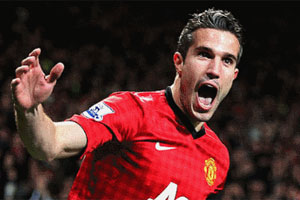 May 2004. Arsene Wenger agreed a fee of just £2,750,000, half of the initial asking price for Feyenoord’s next big star. The Dutch winger Robin van Persie. Wenger has converted London legend Thierry Henry from a winger to a striker, and planned to do the same again. It worked. Robin van Persie became a leading star for the Gunners for the eight years. He would score goals, he would assist goals, he would lead the team. He managed to be part of the side that won the FA Cup, but there was one thing Robin couldn’t do with Arsenal – win the Premier League. Eight long years and no league title… But that was all about to change.

August 2012 was the month that shocked many, disgusted Arsenal fans and delighted Manchester fans. Robin van Persie had agreed to move. £22,500,000. Arsene Wenger had made a big profit, but for him, and for the fans that didn’t matter. They had lost their key player. He had signed a four year contract, and would take the number 20 shirt, in honour of the possible 20th league title that could be going to Manchester, going home again.

RVP made his debut against Everton, but couldn’t stop Everton getting all three points. The next game however was different. Manchester United were to play Fulham, and would beat them 3-2. With his first ever shot for United, he scored. Things were looking up for United, for Robin van Persie. He didn’t stop there though. In September, he grabbed all three goals against Southampton to saviour the win for the Red Devils, also scoring his 100th Premier League goal in the process. He also secured the win against Liverpool later on, scoring a late penalty to get the win in Merseyside.

The fans fell in love with their new Dutch dynamo, and he fell in love with the club. It was a match made to be, and his brace against CFR Cluj to set off his European account proved this. Robin didn’t stop, scoring against Chelsea, his former club Arsenal, and most importantly, scored the last minute winner from a free kick in a 3-2 victory over rivals Manchester City, in his first Manchester derby. That vital goal ended City’s unbeaten Premier League record. The goal also meant he had scored against all 20 Premier League teams.

Not only did he score for fun, he seemed to get injured for fun, managing to pick up a bizarre injury in a match against Queens Park Rangers after crashing into a television camera in the build up to their first goal.

However, the best was yet to come from the striker. Manchester United were sailing above second place city, and could feel the trophy almost in their grasp for the 20th time. Then Tottenham Hotspur managed to overcome Manchester City with the score 3-1, meaning a win on Monday night against Aston Villa, a club fighting for survival, would result in United taking their beloved trophy back to Manchester – covered in the blood red of United, showing their determination, and success.

Robin van Persie started for United, and also ended it all. Just two minutes in, he managed to grab the first goal. A nice lead, making Manchester United fans around the world tingle inside a bit. Soon after, a Wayne Rooney pass fell perfectly to the left foot of Robin van Persie. Only one outcome – Robin’s, and United’s second of the night. Every fan felt that bit closer to getting back what was rightfully theirs. Finally, Robin decided to go one better, and completed his hattrick in the first half.

He became a hero, a legend. He was Robin van Persie, and he was a Premier League winner. Victory was sweet for him, and a title was even sweeter. Nevertheless, the season was not over. United had stormed ahead and won the league with five games remaining. van Persie still had to fight for the golden boot. Luis Suarez was his main contender, but after drama in the Liverpool – Chelsea game, found out it would be his last game of the season, and maybe his Liverpool career. Robin was clear to run away with the golden boot, and still is. United are also trying to beat the record for most points in a match.

In just his first season, Robin van Persie had made history. But could he make more?