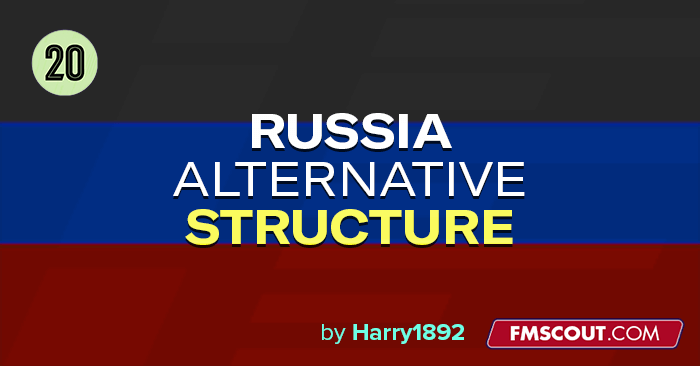 Hello and welcome to the second version of my rework!

The Russian Premier League has announced its intention to expand to itself from 16 to 18 teams, and the aim of this originally was to implement this. After poking around a bit I decided to restructure the Russian pyramid in the first rework. This time I've gone a bit further and brought back the old summer calendar used before 2011. The season now starts in early March and ends at the beginning of December, which cuts out the three month-long winter break which ruined the season's momentum (although there is a month-long break between mid-June and mid-July in the Premier League to make room for any international tournaments).

Other than this, the structure of the top three tiers is mostly the same as before. The Premier League remains the same besides the date switch, with 17th and 18th place directly relegated and 16th and 15th playing 3rd and 4th from the FNL over two legs for survival/promotion. 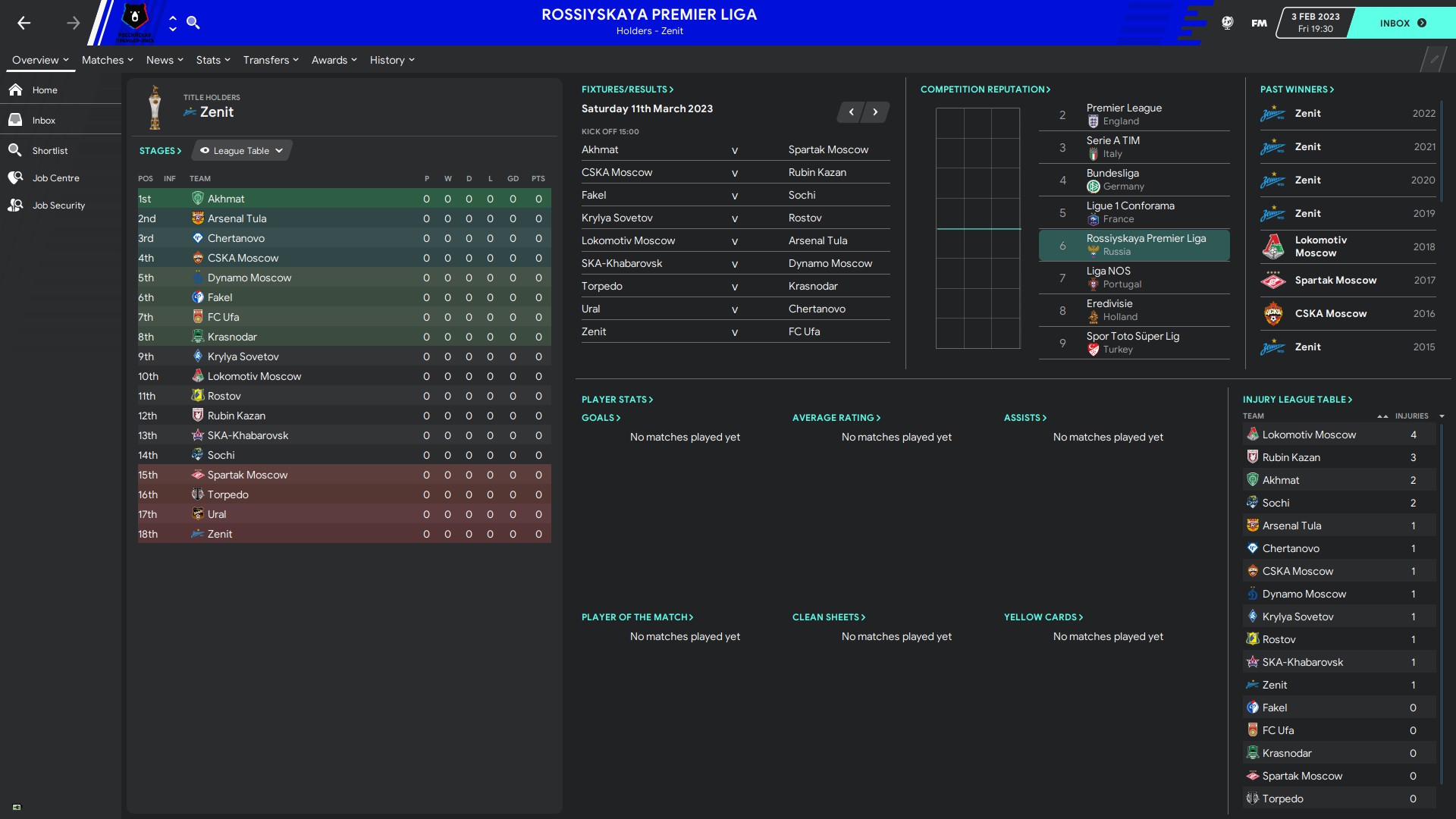 The second tier, the FNL, remains the same too. 20 teams, with the winners and runners-up gaining direct promotion, and 3rd and 4th entering into the promotion/relegation playoffs. At the other end of the table, 20th and 19th are directly relegated to the third tier whilst 18th and 17th enter into a playoff against 3rd and 4th in the league below for survival once again. 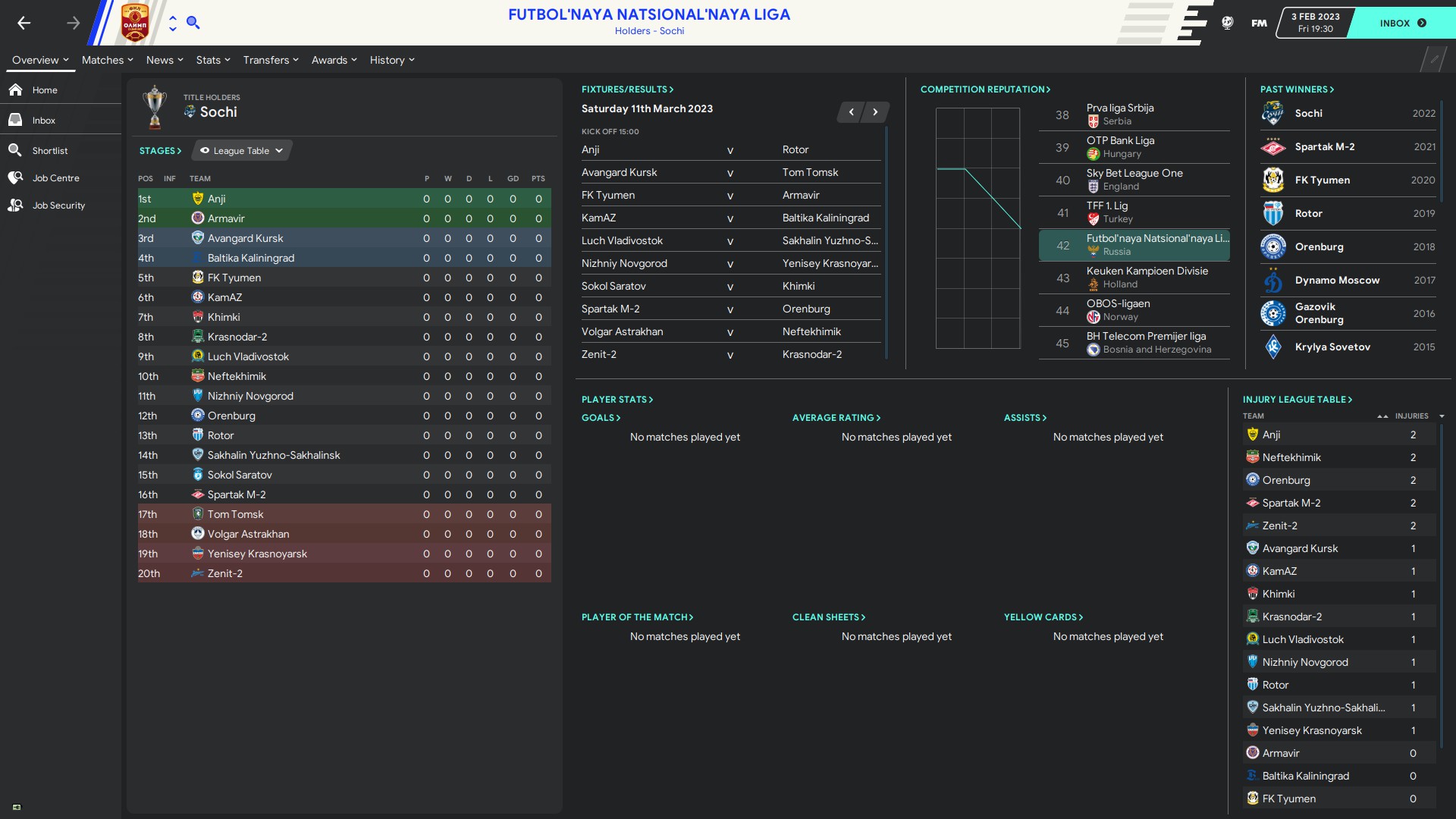 The third tier is where the first structural difference comes in. Once again there are 22 teams, and the top two are automatically promoted and 3rd and 4th are entered into the playoffs. However, this time only the bottom three teams are relegated. 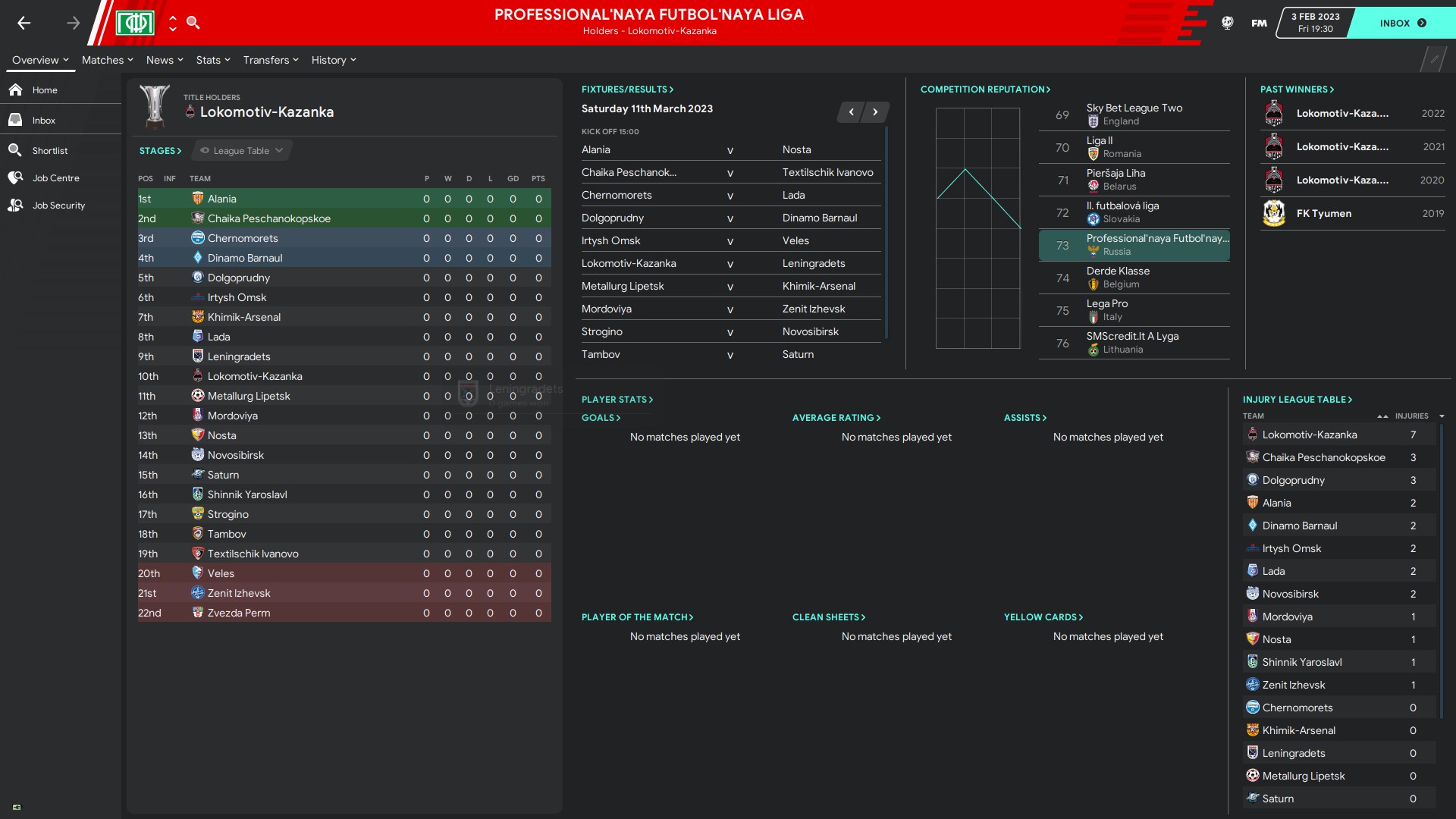 The lower divisions have now been completely revamped. The previous version had a 4th and 5th tier, but even though they were divided into multiple groups, they were nation-wide. I'm sure you're aware that Russia is an absolutely vast country, and so a lower-division team travelling from the Far-East to European Russia every other week is simply financially unfeasible. Therefore, the 5th tier has been completely cut, and replaced by a 4th tier divided into 6 regional groups; West, Moscow, Central, South, Ural-Povolzhye and East. The winners of each of these groups will play one of the others over two legs to gain promotion to the third tier. 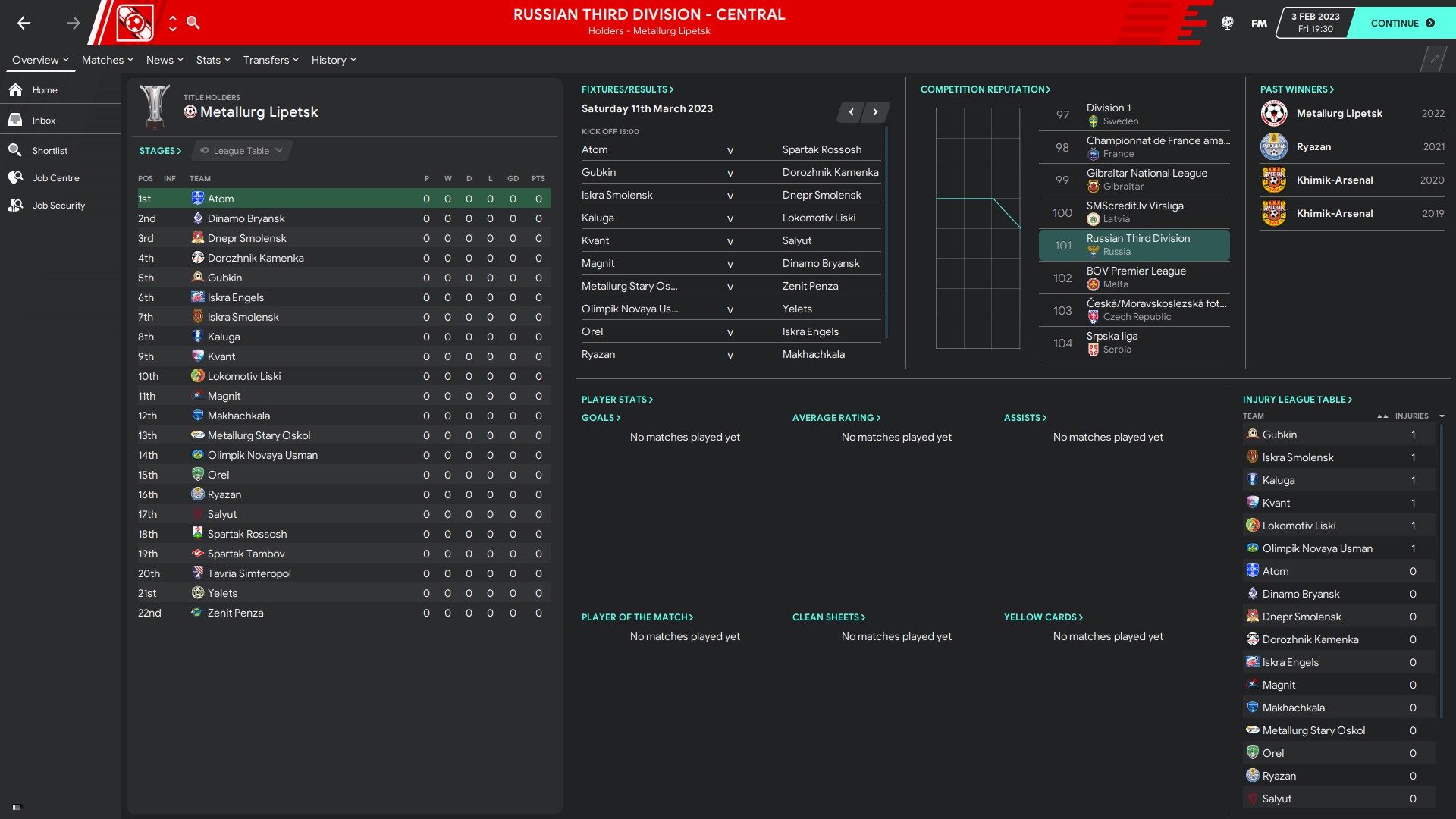 The restructure also features a redone Russian Cup featuring all 182 teams on the pyramid and a Super Cup between the Cup and Premier League Winners. 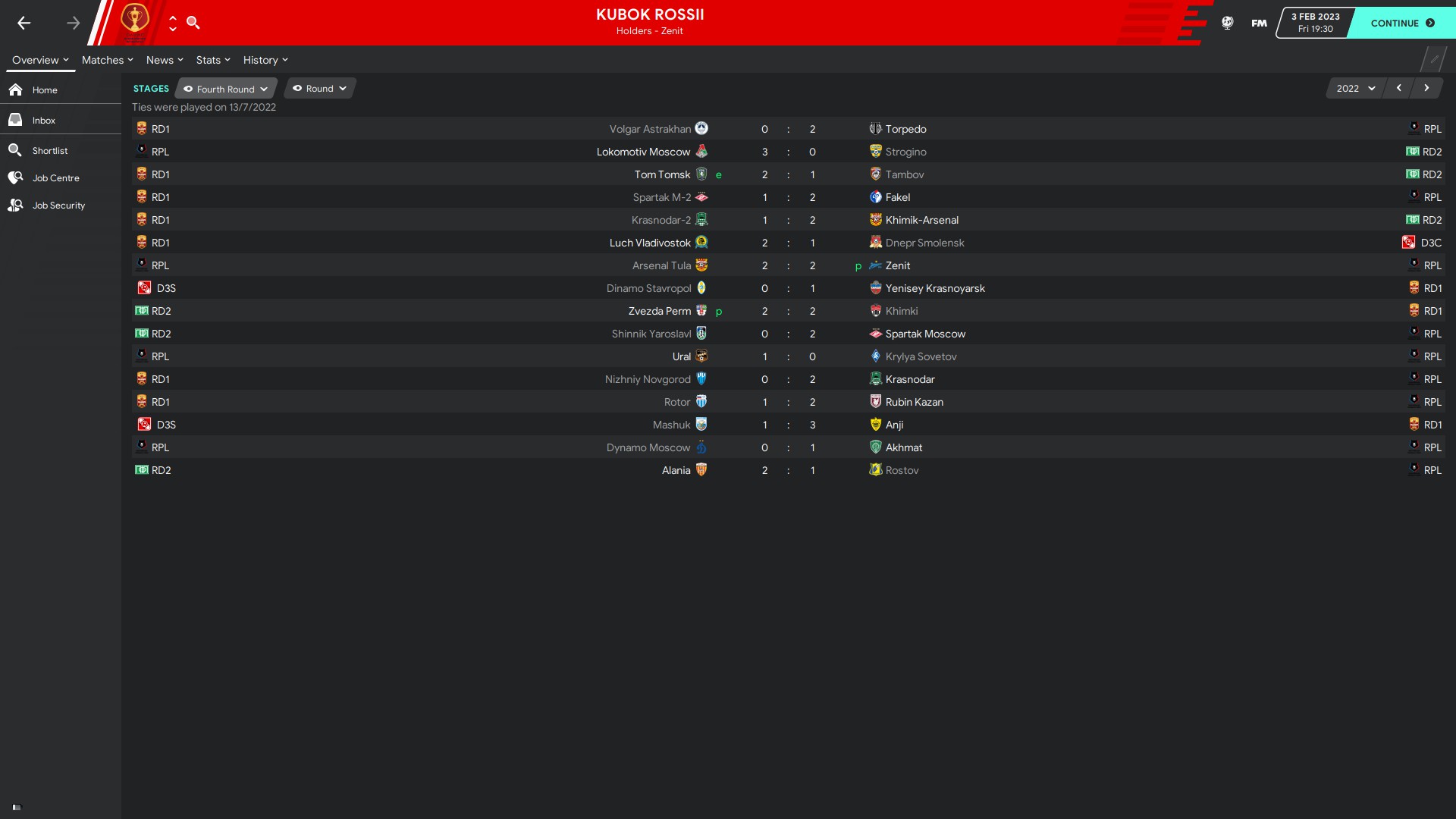 The final feature I'll advertise is that every teams in the structure has a stadium and kits for the most possible immersion. This took a while to redo and I even had to start over at one point so I hope you'll all enjoy it!