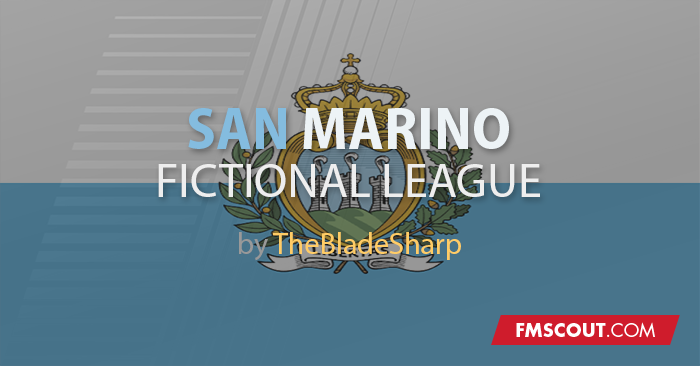 Note 1: If you have my other version of this league update installed be sure to uncheck that one and check this one when you load a new database as to avoid any problems from showing up. This is the final build of the competition that will be published. I tried to update the original file but for some reason I wasn't allowed to do so, hence this new version for people to play with. This update adds 2 cups, namely the national cup for continental football, as well as the super cup which is between the cup winner and Top League winner. I have also tweaked a few of the hidden aspects of San Marino as to improve the way that the nation would play international football, make decisions and aid in the throughput of youth players.

Note 2: This entire update to the San Marino footballing system is 100% fictional. Everything within it is entirely built around my own, private, playthroughs.Tips are always welcome, however!

Note 3: Should you want to read the origin story regarding this fictional league I implore you to check the bottom of this page!

This update adds a grand total of 17 new clubs to the San Marino footballing system. These added clubs are from 4 different nations, namely:

Emilia Rimini FC is the only club not to play in the 2nd tier as they were instantly placed in the top flight.
All of these clubs have great facilities and good finances for their competitions.


--- ORIGIN STORY BELOW---
Franco Barini is a wealthy businessman from San Marino. Born and raised in Montegiardino he was always an avid fan of football. However, just like every other Sammarinean, he had to see how his country's national team lost every single game that they played, safe for a few exceptions. But not only that, the entire league system was in shambles according to him. Not only were the clubs never challenged, they also rarely tried to improve their own setups as there was no real need for any improvements.

This infuriated Franco who, over the next ten years, saved as much money as he could through his businesses to eventually try and change the way football was played within his home country.

This massive journey eventually began when he stepped up to the Sammarinean and Italian football associations. To both parties he laid out his plans, to improve football in San Marino and tighten the bonds between the two countries as well. A plan was shown to create a whopping 17 new clubs from scratch, some within and some outside of San Marino.

Naturally both FA's rejected the ideas, labelling them 'absurd' and 'worthless'. Franco had planned for this, however, and stated he would cover for all the costs. He also claimed that the competition between clubs from both nations would ensure that players would always want to outshine the other teams. For San Marino it would mean an altogether improvement and for Italy it would mean that their youngsters had even more places to gain experience.

The two nations discussed for a little while and eventually agreed. However there was one caveat, they could only provide room for a total of 15 new clubs. One of which was already planned to be built way over in Florence.
Franco had to figure out another way to work his plans or change the amount of teams within the leagues.

He opted for the first and went a whole different route altogether. As Italy and San Marino were out of the question for more clubs he looked abroad, and quite a distance at that. Ending up in discussions with multiple nations he managed to eventually settle with two; Croatia and Slovenia. Both countries only wanting to supply one club to the league system each. Franco was ecstatic at this, because it meant everything was going to work out just as planned.

Now here is where your story shall continue as a manager. Will you become manager of one of the many new teams created by the wealth of Mr. Franco Barini? Or will you take the role at the front of one of the pre-existing clubs of San Marino, forced to blatantly accept the new clubs within the country and aim to gain the same professional status?

I am aware that the rewards for finishing places in the league are sequentially increased. This is down to the background story of this league. This, however, can be changed depending on what tips people have in regards to it.
The price money goes from 320k for finishing 1st in the Top League down to 10k for finishing last in the Challenger League. If this is too much please tell me!
As this is my very first workshop item I would love to hear feedback from anyone who has it!
With that said I hope that you'll have just as much fun with this league as I have!

Once the download of this file has been completed please make sure to put the .fmf file in the right folder within FM 2020 if it hasn't automatically gone there already. Under Football Manager 2020 you have to put the .fmf file in the "Editor Data" folder. If you do not have this folder you can create this one manually, call it "editor data" and then add the .fmf file to that folder.
Once that has been done you should be good to go!
If you run into any troubles please send me a message on Steam (TheBladeSharp), or on Discord (TheBladeSharp#4872)