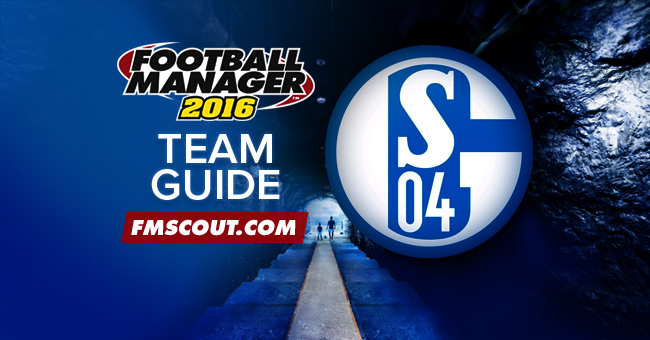 Schalke were formed in Gelsenkirchen, Germany in 1904. They enjoyed their most successful spell between 1934 and 1942, winning 6 National Titles and one Tschammerpokal. In 1972 they won the DFB-Pokal. In the 1980’s they suffered three relegations to the second division, but have been in the Bundesliga since 1992.

They lifted their first major trophy for 25 years when they won the 1997 UEFA Cup Final against Inter Milan. Since then they’ve had most success in the cup competitions by winning the Pokal four times, the Supercup once and the now defunct Ligapokal once.

They finished as Bundesliga runners-up as recently as 2010. 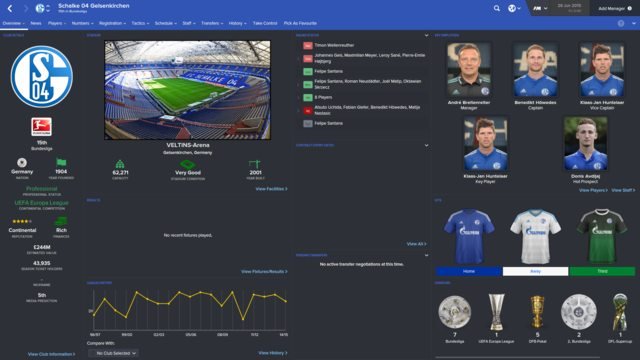 Schalke are the third richest club in Germany and were rated as the 14th richest club in the world in 2015. They start with £66m in the bank and can offer you a decent transfer budget of between £14m and £17m depending on your goals for the season. Leaving them set on minimum will give you the best chances of hitting your target while still getting £14m and £72k to make one to two signings. These goals are very achievable. They are expected to make big financial gains in the first season, so you should expect a good transfer kitty in season two.

In the first season, you should really be trying to get into those Champions League places. The media are predicting a 5th place finish in the Bundesliga. With the right signings and a good run, you have a realistic chance of picking up a cup.

Everyone has their own preferences to the systems they’d like to use. Below are some of the shapes that I think would work best. The roles and duties have not been assigned and are just a graphical representation. 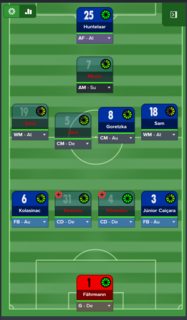 Two banks of four with one man behind the striker.

It offers good options going forward and with the players available in the squad, I’d say this is one of your best options. Schalke have a lot of pace on the flanks and you should be able to use this to your advantage. 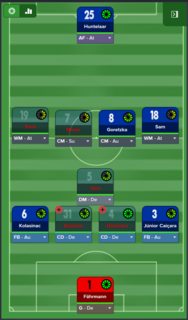 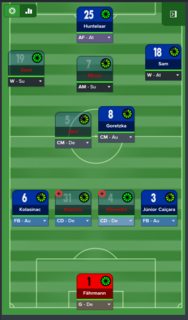 The 4231 pretty much replaced the 442 in recent years. It gives a lot of passing options high up the pitch as so many players are in advanced positions. I prefer to use one winger and one inside forward in a 4231 and it gives you width on one side and a possible overload option on the other. Choupo-Moting could fill the inside forward option if required.

You could move your two central midfielders to deeper positions if required.

Goalkeepers:
Schalke have a great first choice goalkeeper in Ralf Fährmann. At only 26 years old, he’s still got his best goalkeeping year ahead of him. Timon Wellenreuther is out on loan the first season. He’s 19 and has a great future ahead of him. Fabian Giefer will be a solid backup for the first season. You have two great goalkeeping options for the near future and it’s not a position I’d be looking to strengthen.

Right Back:
Junior Caiçara joined Schalke from Ludogerets in the summer. He’s a great attacking full back, although his defensive attributes are lacking. He has pace and enough energy to run up and down the flank. His crossing ability definitely means he’s a good option to have in the team. Atsuto Uchida starts the season injured, but offers a more solid defensive alternative to Caiçara, but still has plenty of pace if you were to break on the counter. You also have Sascha Riether who will certainly do the job if required, but as soon as Uchida is back, I’d be looking to move him on.

Left Back:
Sead Kolasinac is another good full back, but offers more defensively than he does in attacking situations. Again, he’s very quick, strong and is good in the tackle. Dennis Aogo can play in many positions but to me, he’d be your next best left back option.

Centre Back:
Schalke have three very good centre backs at the start of the game. Benedikt Höwedes, Matija Nastasic and Joël Matip are all international quality. There’s also backup options of Kaan Ayhan and Marvin Friedrich who can develop nicely if given game time. Not a position I’d be in a hurry to upgrade. Be aware that teams will be after Matip though. I’ve loaded up a few saves and it’s happened each time. You can raise a lot of funds through selling him and still have a good centre back pairing.

Central Midfielders:
I’ve decided to put all central midfielders in one group. There’s lots and lots of options here. Leon Goretzka can play in several positions. He’s only 20 but has the potential to be your best player, he’s the first name on the team sheet for me. He can pass, he’s quick, he’s good on the ball. I’d say his best role is as a deep lying playmaker or a roaming playmaker. Johannes Geis is a new signing at Schalke and a very good player in the making. Only 21 years old, he has great passing ability and is excellent at set pieces. Roman Neustädter is a good defensive or box to box midfielder that would likely be a back up option. Maxi Meyer is your best attacking midfield option, he’s only 19 and already has some excellent attributes. He’ll need a bit of work to become a top class player, but he’s certainly one that you can’t ignore. Goretzka offers an alternative attacking midfield option. I’ve missed out Pierre-Emile Højbjerg as he’s only on loan, but he can certainly do a great job for you in the season that he’s there.

Wide Midfielders:
Leroy Sané is your golden boy in the wide midfield positions. He’s only 19 and again, he has bags of pace and potential. Develop him right and you’ve got a world class winger on your hands. Sidney Sam is also a pretty good winger with bags of pace. He’s not someone I’d be relying on long term. Maxim Choupo-Moting can play on either side of midfield either as a winger or an inside forward. Meyer and Goretzka can also play wide if required. You’ve got Christian Clemens on loan at Mainz in the first season, but he’d be a backup at best.

Strikers:
Klaas-Jan Huntelaar is your most experience striker and probably one of your best known players. He can score goals, but he lacks any pace and is quite selfish. Franco di Santo is a player I remember from his days at Wigan. He’s new at Schalke and is actually a pretty decent forward. He can score goals, has good pace and works hard for the team. Choupo-Moting is your next best option in attack, but is more of a creator than a prolific goalscorer. You also have Donis Avdijaj who’s out on loan at Sturm Graz. He’s young and a bit raw, but with game time, will come good.

I’d say the weakest part of your team is the winger positions. Your first options are pretty good, but there’s nobody at the club to threaten them for their place. I’d definitely be looking to purchase one good quality winger. Sidney Sam is good, but not one for the long term.

I’d say after that, I’d be looking to offload Klaas-Jan Huntelaar. Controversial, but I always try to think long-term when it comes to a save. He’s 31, his wages are high (£96k p/w) and his value is only going to drop. He’s a good finisher, but doesn’t offer much else. You could probably get about £5m for him and with the saving in wages, you could put some of that money in the transfer kitty. I’d make sure you can get a suitable striker before you sell him on.

The only other signing I’d be looking to make, is a good box to box midfielder, someone who is a good all round option in the middle. It will depend on your remaining finances as I don’t think this is essential.

Overall, there’s a fantastic base at Schalke. They have several good young players in the first team that can be with you for years to come. With the right development path, you have the core of a title winning team as soon as you start your save. You’ll need to add the final pieces to the puzzle and have some luck along the way, but I think you can have a very enjoyable save with this team.

The team has great facilities and if you push the board to upgrade them, you’ll have the best available.

Schalke are known for bringing through top class players and would be an ideal candidate for a home grown challenge or for someone looking to break the dominance of Bayern and Dortmund.