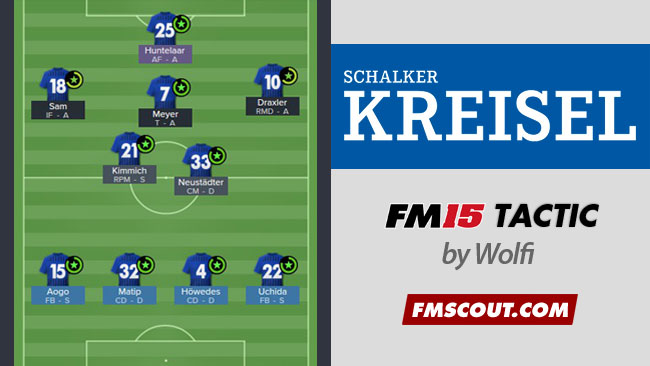 Ajax’s total football, Barcelona’s tiki taka came second and third respectively. Before those were Schalke 04.
Die Königsblauen in 1925 became the dominant local side, based on a style of play that used short, sharp, man-to-man passing to move the ball.
This system would later become famous as the Schalker Kreisel (English: spinning top; gyroscope). In 1927, it carried them into the top-flight Gauliga Ruhr, onto the league championship, and then into the opening rounds of the national finals.
Source: Wikipedia

I have decided to create a tactic based on Schalker Kreisel’s general philosophy like short passing with high tempo and on my tactic VFB Stuttgart.
I repeat I didn’t try to create the original Schalker Kreisel. Anyway, I created a tactic 4-2-3-1 wide for Schalke 04.
Attacking mentality and fluid team shape proved to be an excellent combination.

The above instructions intent to make the team play attacking fluid football based on short, sharp, man-to-man passing to move the ball and at the same time to keep the possession of the ball. The defensive line pushes higher up the pitch to help the team maintain possession. The use of the offside trap is a must because of the big space behind the defence. Exploit of the middle means play wider. Close down more and preventing the GK to distribute are needed so that the opposition doesn’t have the possession of the ball. Since I use a Raumdeuter and an Inside Forward who stay narrow, it means my FB should stay wider for better fluidly. Trequartista does his things while the Advance Forward is a constant threat for the opposition’s defence.